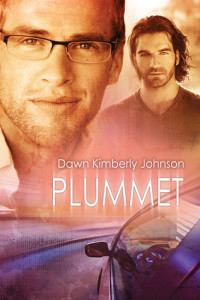 Dealing, or rather not dealing, with a recent breakup, Ari Melrose, CPA, nearly takes his car over a cliff. Instead, he is rescued by Brandt Steuben, a big, burly ex-firefighter who pulls him to safety and into his arms. Near-death experiences can make normally careful, rational people grab life by the horns, or men by the biceps, and hop on for a wild ride, so Ari figures what better way to get over his problems than to work them out with his super-hot savior? But a fateful afternoon soon leads to more than physical passion, and Ari finds he might not want to let go of Brandt.

Ari Melrose is trying to deal with the breakdown of his relationship recently. He is out with his gal-pal, Nanette, when his ex, Saul, and his new guy turn up –

It had been a month, and I thought I had dealt with losing Saul to that young, swishy piece of ass, Thilo Becke…

But Ari hasn’t dealt with the loss of Saul and he takes off, hops into his car, and finds his Miata, and himself, hanging over a cliff after he swerves to miss a truck. Luckily for Ari there is help nearby – the rather burly and baritone-voiced Brandt Steuben comes to his rescue and gets him out of his dangling Miata just before it hits the bottom of the cliff. Not only is Brandt a guardian angel, and gorgeous, he is gay. What are the odds of that? Maybe not too high, but whatever, it was all rather nice as Ari kisses Brandt and he responds in kind. One thing leads to another, and Brandt ends up back at Ari’s place.

There’s a naked man in my bathroom, a man who isn’t Saul, a man with a body I could chew on for weeks.

That’s when the self-doubts swamped me. Why would he be here with me?

“Ari?” His deep, gentle voice broke through my thoughts and fears. “Look at me.”

“I can see the second thoughts running through that head of yours.” I could feel his chest vibrating against mine.

Plummet is not really new in the telling – MC loses boyfriend…to a younger boy-toy, MC doesn’t think he is going to meet a nice guy again, and is still reeling from a break-up, MC thinks he is not sexy anymore, but new MC thinks he is. A bit of sex, a bit of feeling is there, but not a lot as it is very short. But it is a sweet story aided by the fact that A) I needed something sweet and short B) I simply liked the characters and C) it was nice… and I did not need to overthink or overanalyse a thing while reading – sometimes that can just be bliss in itself.

This is the second Dawn Kimberly Johnson e-book I have read and she writes a sweet story with nice characters.  Technically the writing is solid, and well edited. If you are looking for a short contemporary story, with a sweet,  happy vibe and a good ending, then I can certainly recommend Plummet.

ARC supplied by Dreamspinner Press in return for an honest review.

Sometimes you just need short and sweet. It looks like Plummet delivered. This looks like a nice short story.

It did deliver short and sweet and I did need that. I could do with another one just like it right now 🙂