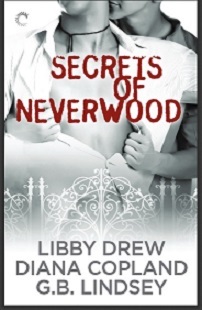 This giveaway is closed. Thanks to all who entered! Congrats to Jay for winning the e-copy!

On Top Down Under Book Reviews would like to welcome Libby Drew, who has kindly shared an excerpt of The Lost Year, her contribution to the Secrets of Neverwood anthology, and has offered an e-book giveaway to one lucky person who comments on this post. The giveaway will run from July 10th through July 12th, with the winner being chosen at random at midnight (US/EDT) on Saturday, the 12th. The winner will be notified via email. For a chance to win an e-copy, just leave a comment at the bottom of this post and your name will be included. Good luck!

You can find Cindi’s 5 star review of Secrets of Neverwood here.

Secrets of Neverwood… Three foster brothers are called home to Neverwood, the stately Pacific Northwest mansion of their youth. They have nothing in common but a promise to Audrey, the woman they all called mother—that upon her death, they would restore the house and preserve it as a home for troubled boys.

But going home is never easy.

Cal struggles to recover from past heartbreak, while Danny fears his mistakes are too big to overcome. Devon believes he may never break down the barriers that separate him from honest emotion.

On the path to brotherhood, they discover the old mansion holds more than dusty furniture and secret passageways. Audrey’s spirit still walks its halls, intent on guiding “her boys” toward true love, and an old mystery stirs up a new danger—one that could cost the men far more than just the house.

Secrets of Neverwood #1—One Door Closes

Secrets of Neverwood #2—The Growing Season

Secrets of Neverwood #3—The Lost Year

Thank you for having me! Please enjoy this exclusive excerpt from The Lost Year, book three in the Secrets of Neverwood trilogy. As the oldest foster brother to return to Neverwood, Devon had a difficult time finding his place in his new family. Things have since settled with Cal and Danny, but a new troubling mystery is unfolding, one that could end in heartbreak.

He sensed Audrey later, when the moon had set and the budding light of dawn filtered 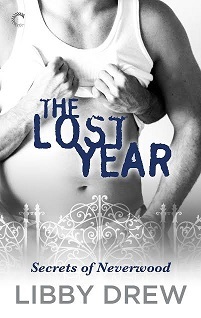 through the trees. It wasn’t the physical touch he normally associated with her, but rather a pervading sense of warmth and goodwill. The echo of a loving voice. The joy he’d always felt at earning her praise.

He’d untangled himself from Nicholas an hour ago to fetch his camera. Perched backward on his chair, Nikon propped on the top rail, he’d used the bright moonlight shining through the sheers to frame shot after shot, mesmerized by the vision of Nicholas sprawled across the rumpled white sheets.

He wasn’t surprised when the curtains started to flutter. This was no passing breeze. The windows were closed. The sheers lifted and fell, like the swell of an animal’s sides as it breathed, then levitated to stretch across the room toward Devon. Nicholas muttered something, curling more securely against Devon’s abandoned pillow, and the curtain dropped, settling back into place over the French doors. Someone was celebrating.

He’d seen this sort of behavior before. When Will had come home, and then when Danny had found Sam. “Don’t get your hopes up,” he whispered. Between the door and the curtain, a shadow shifted. The material pressed outward in the shape of a delicate hand.

“He’s leaving, you know. Soon. And the kid too. So don’t fall in love with them or anything.”

The curtain billowed in tight waves. She’d never held back when she found him amusing. Death hadn’t changed that.

“Laugh all you want. But here in the land of the living, there are rules. And just because you want something doesn’t mean you get it.”

“Doubts are skittish,” Nicholas mumbled into his pillow.

Now she was in Nicholas’s dreams too.

“Yeah. Lots of things are.”

Libby Drew glimpsed her true calling when her first story, an A.A. Milne /Shakespeare crossover, won the grand prize in her elementary school’s fiction contest. Her parents explained that writers were quirky, poor, and often talked to themselves in supermarket checkout lines. They implored her to be practical, a request she took to heart for twenty years, earning two degrees, a white-collar job, and an ulcer, before realizing that practical was absolutely no fun.

An avid supporter of gay rights, Libby donates her time to the Trevor Project and organizations that work to support marriage equality.

It is fabulous. I totally loved every story in the anthology. And check out those covers! Absolutely gorgeous.

Thanks about my review. It was an easy one to review. 🙂

Good luck to whoever wins the book. It’s an outstanding read.

Sounds good, count me in ladies 😉

Thank you for a chance to win Libby’s part of this wonderful series, I love the extract and have this book and the rest on my wish list. Thank you again Cindi & Libby 🙂

Alas poor Ee-yore, I knew him well Pigglet! A quote from Winnie the Pooh (the Prince of Ashdown Forest) one of Shakespeare’s lesser known plays

Thanks for coming by, Sula, and you’re welcome! The stories are all outstanding and I highly recommend them all.

I would love to be entered in the giveaway. This looks like a good story.

The covers are nice.

You’ve been entered, Corey. They are all three great stories. 🙂

Ooh, all three stories look good. I’m in agreement on the covers. 🙂 Stunning.

Aren’t the covers fabulous? 🙂 Thanks for popping in, CK.

It is, Sally. Thanks for commenting.

I would love to be entered, please! All three look amazing!

You’ve been added, Sarina. Thanks for stopping by!

Me please 🙂
Put me in. I love the covers too. Thanks 🙂