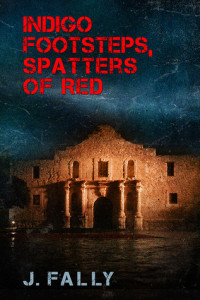 At first glance, Carter Cross and Josh Lessard seem like an ordinary couple. They make love and fight, know each other’s strengths and weaknesses, deal with the “in-laws,” and share their life and home. They even work together. One day, they’ll probably die together – possibly a lot sooner than they’d prefer, given their profession as members of a paramilitary special unit formed to thwart a gory apocalypse. While Carter and Josh are used to cheating death on a daily basis, this time the odds are stacked against them. Between a deadly mission to complete and Josh’s grandma coming for a visit, it’ll take a miracle to get them out as horror invades not only a major city but also their home.

Last year I had the pleasure of being one of the first, if not the first, to review the fantastic Bone Rider. On the strength of that book I jumped into Indigo Footsteps, Spatters of Red. Sadly, this novella did not live up to the hope I had going in.

Josh and Carter are preparing for Josh’s grandmother to arrive. In preparation, they are painting their house in rainbow colours, as Josh’s Memere has embraced her grandson’s gay relationship with gusto.

On top of their relationship, Josh and Carter are part of a paranormal military squad who hunt Zampies – a zombie/vampire hybrid. As an aside, Zampies (or creepy-crawlies) did nothing for me as a name.

There was a nice enough relationship, humour, and some action, but, unlike Josh’s Memere, I found the book hard to embrace. I felt like I had been dropped into the middle of a series. There were a few names in the squad (they whizzed on by) but there wasn’t much time spent on the action. I felt like I should be more familiar with Josh and Carter’s relationship, but, as pleasant as they seemed, they really were strangers to me.

Indigo Footsteps, Spatters of Red read like it was (Indigo book #1.5.) A bridging novella between the first in a series and a second. One of those novellas where you get a peek into the lives of an established couple you know and love, only I didn’t know or love Josh and Carter.

Overall, this book is okay. I can’t complain about the technical writing, it was error free, but it lacked passion and chemistry. It had a bit of sex, a bit of humour, a (really little) bit about an interracial couple, a bit about a slightly eccentric family, a bit about a paranormal storyline, everything I like was here. The trouble is, there was not enough of anything in particular that I could latch onto and sink my feels into.

This book was supplied to me by Dreamspinner in return for an honest review.

This looks like it could have been a really good story had it been a bit longer and more fleshed out.

I have read short stories and novellas that said so much in so few words, but sadly that didn’t happen here. It was just missing that character development I need to connect.

Bone Rider was one of my BOTY last year. I will keep following J Fally’s writing.