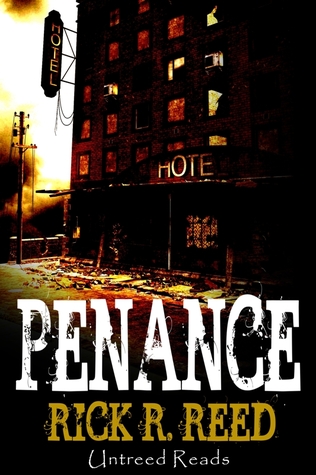 I have been reading horror/thriller books since I was much too young to be doing it. Everything from Stephen King to Ed McBain to every other book I could get my hands on. I’ve read it all and I’ve loved almost every single one of them. But nothing, nothing, could have prepared me for Penance. I have never had a book get to me like this one did. With all the Rick R. Reed books I’ve read (and believe me, I’ve read a lot), I have always said that the thing that makes him such a go-to for me is the fact that his stories are real. Penance is very real and I warn everyone who may consider reading it that it’s not for the faint of heart. The brutalities described are so detailed that you will be scared of what will happen next. But yet, you won’t want to put down the book because you will have to know what will be happening next. I admit that I did have to walk away – for a few days anyway.

I am a mother of three (now grown) sons and to know that what is described in this book can be happening in the real world forced me to take a step back. It doesn’t matter what kind of parent you are or how good of a life you’ve given your kids, any one of these children could belong to one of us. How many times (if you’re a parent) has your child said they wanted to run away in a fit of anger? What if they had and ended up just like the ones in this book? I found myself in tears more than once reading this. My blog partner comments often about me being a “mum and nurturer”. She has never been more correct than when I was reading Penance.

I read Moving Toward the Light by this author a few days ago. At the time I was not aware that it was the sequel to Penance. I have had Penance on my Kindle for weeks now and had every intention of reading it soon, but that story pushed me to do it sooner. I knew how it would end. I had an idea of the story that led to the sequel. Even knowing all of that, I was still not prepared for how it all played out. I finished this over a day ago and I’m still strongly affected by it.

Penance tells the story of a group of kids who are living on the streets for a variety of reasons. Some were forced out by their parents. Some are runaways who didn’t want to abide by the rules at home. Some are just lost children who felt they had no other choice but to leave their homes. A group of these kids, along with a twenty-six-year-old named Randy, form their own little unique family. There’s Miranda, who picks up tricks to keep up her drinking habit. There’s Jimmy Fels, who has a mother in the picture (kind of) but who is probably better off away from her. War Zone, Little T, Avery and Randy round out their unusual family. Not all back stories of these kids are fleshed out in the book but they don’t have to be. You know that each one has his or her own personal reasons for doing what they do, whether it be turning tricks for older men or stealing just to have enough money for one meal.

This is one of those books where the reader knows almost immediately who the bad guy is. In Penance, that bad guy is Dwight Morris. In the beginning, Dwight is married and has a little girl. This marriage ends not long into the book. Dwight was raised by his psychotic Aunt Adele, who died recently. The reader discovers more and more about Adele and why Dwight is the monster he is. She was a horrible woman (in life and death) who believed in unthinkable punishments for her nephew.  This doesn’t, by any means, excuse Dwight for what he does later, but it does explain it in a sense. I’m one of those who will have sympathy for a bad guy if he had it rough growing up. That’s just me. That was not the case (in any way) with Dwight Morris. I don’t know that I’ve ever wanted to see a fictional character die like I did Dwight. No sympathy. No coming back.

Dwight is convinced that the street kids are the cause of his own perversions. He blames them for the end of his marriage and for who he is. He has urges and feels that only by ridding the area of these temptations will his life be normal.  The title is appropriate because Dwight is convinced that the kids must seek penance for whatever wrongs he feels they have done in their short lives, and the wrongs of his life that he blames them for.

Dwight starts with thirteen-year-old Jimmy Fels. Don’t get me wrong, Dwight has been terrorizing kids for awhile now, only Jimmy opens the door (so to speak) for him to begin his vow of cleaning up the streets with his own brand of justice. He brings Jimmy to his home, with the boy thinking he would bend over for a few dollars and be allowed to leave to go back to the rundown building he shares with his friends. Only things don’t go as Jimmy hopes. Dwight brutally assaults young Jimmy and only by a stroke of luck does the boy manage to get away. His escape begins a downward spiral for Dwight, with him blaming Jimmy for what he does later – kidnapping and brutalizing the others in Jimmy’s group one by one. Dwight justifies this for religious reasons, even praying as he assaults each child. Only now? Dwight has gotten smart and instead of taking the children to a bedroom where they could possibly escape, he designs his basement where there is no escape possible.

Then we have Richard Grebb. Richard is a priest. He is also a pedophile who has been battling his urges for boys for most of his life. He has tried to get help, even going to a 12-step program, but no matter what he does, he can’t control the sexual feelings he has for young males. I have to state quite clearly that I felt zero sympathy for Richard Grebb, though he did try his damndest to deny his “urges” and to later help the children who were kidnapped by Dwight Morris. Richard is a complex character in a sense. The reader is taken inside his head as he battles with himself and with God over feelings he believes are beyond his control. Richard turns out to be an extremely important character later. He tries to help Jimmy after the initial attack by Dwight and he plays a huge part in the resolution of the story. Did I like the guy? Oh, hell no, but he did try to help everyone in the end.  He did his part to help and I applaud the author for showing that even sick human beings are capable of doing the right thing, even if they are battling themselves along the way. This does not, however, make me feel that he deserved resolution for his own sins. I’m not saying he got them. I’m just saying that I would have had no problem at all had his particular ending been different.

There is much more I could say about this book. I could give you a rundown of all the atrocities described and I could try to tell you how each one of these children got to me in ways I could never explain. I could tell you more about sweet Jimmy Fels and how I wanted to hug him every time he was on page. I could describe more about Dwight Morris, and even Richard Grebb, and tell you what made them the people they were in this book. I am not going to do that because this is one of those books you would have to read yourself in order to understand the emotions that it will bring out in the reader. And in all honesty, I want to walk away and find a happy book now.

Overall, this is a brilliant work of fiction. Yes, it’s a difficult read, but it’s also one of the best books I’ve ever read. I am a huge fan of Rick R. Reed and have always believed that there is no other author who can bring out real issues in stories like he does. Mute Witness, Caregiver, Echoes – to name a few that also touch on sensitive topics. But even with all of his books I’ve read (this is my 19th or 20th reviewed on this blog alone), no other book, whether he wrote it or not, has gotten to me like this one. Penance is an older book, but it’s also one of his best.

I’ll end this review with this – if you plan to read this be prepared. This is no romance. This is no sappy sweet story.  It’s extremely graphic and most of what occurs does not occur off-page. You might smile a couple of times but I can assure you that you will shed a lot of tears and will cringe over the horrors described. If you want sweet, find another book. You won’t find that in Penance. But if you are looking for a book that will keep you on the edge of your seat and you know what to expect going in (as far as the on-page violence), I can’t recommend it enough. Not many authors can bring out emotions like Rick R. Reed can. In Penance, he definitely brought out mine.

This book was provided by Untreed Reads for the 2014 e-book challenge, in exchange for a fair and honest review.

Thank you, Cindi, for another amazingly thoughtful review. Penance wasn’t an easy book to write and it means a lot to me that it struck such an emotional chord with you. Now, go read something fun and fluffy (Dinner at Home, my fun and fluffy “romance with recipes” comes out May 9, the author says in a not-so-subtle stab at shameless self-promotion).

Ha! It just so happens that I have Dinner at Home on my “Hurry Up And Be Published Already” shelf.

Penance is a brilliantly written book. Yes, it was difficult to read and it had me crying ugly tears, but it’s an outstanding book.

(…. I’m off to find something about kittens or baby seals now…. *grin*)

I could not read this book because, well, you know why.

This is a wonderful review, Cindi. Very emotional and passionate and detailed without giving a thing away.

Thank you. I can read the most gruesome slasher book and not be that bothered by it. But give me one about kids and I’m the way I was with Penance. Great book, but it really got to me. I am glad that I read it. It’s an excellent book, just very dark.