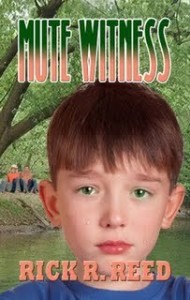 This book is one of the most difficult I’ve ever read.  If you’ve read the official blurb, you know the story is centered around an eight-year-old boy (Jason Dawes) who is kidnapped and raped.  If you have ever read Mr. Reed’s writing before you know that his manner in which he describes things is not always happy and roses. However, considering the subject matter, everything is written with sensitivity and care when it comes to the child.  There are parts of this book that will make you cringe and I can honestly say that I found myself nervous about what was to come each time I turned a page on my Kindle.  I’ve said this about another of this author’s books but it bears repeating. It’s like watching an accident that’s about to happen and you know it will be bad so you want to shield your eyes because of what is about to happen but you can’t because you have to see what comes next.  At times I wanted to walk away but I couldn’t force myself.  It was that edge-of-your-seat and parts are that horrific.

Sean and Austin are happily building their new life together.  Added to the happiness is Jason, Sean’s eight-year-old son.  Only allowed weekly visitation after a pretty nasty divorce, Sean takes whatever time he can get with his son.  As much as he loves Austin, Jason is Sean’s child and is the most important person in his world.  Then the unthinkable happens.  Jason disappears without a trace.  When he’s found a few days later he has been brutally raped and the once happy and talkative child is now mute and refuses to even acknowledge anyone’s presence. This is the beginning of a rollercoaster for Jason, his mother and stepfather and Sean and Austin.  Suspicion immediately lands on Sean and Austin as neither have tried to hide their sexuality or relationship. Being openly gay in small-town America with the prejudices of small-minded people immediately make Sean and Austin suspects because of their “perverted lifestyle”.  Throw in Estelle, Shelley’s horrible mother who uses religion as her excuse to judge Sean and Austin and they do not stand a chance with the local authorities.  With the suspicion placed on Sean and Austin, the real culprit is closer than anyone realizes.

Problems arise between Sean and Austin that may break up their new relationship.  Shelley’s mother is a force to be reckoned with and not in a good way.  She does everything in her power (both legally and non) to keep Jason away from Sean because of his lifestyle. She is quick to spout off scripture and use God as her excuse to condemn and judge others and is convinced that all gay men go after young boys so he must be the one who harmed her grandson.  (She reminded me of my own mother in a big way).  Paul, Jason’s stepfather, will creep you out in so many ways. He is the stereotypical chauvinist who wants his woman barefoot and pregnant (so to speak) and if she doesn’t do as she’s told, he strong arms her until she does. There is more to Paul than initially meets the eye and this comes out little by little as the story plays out.  I was not sure what to think of Shelley in the beginning as the story behind her and Sean’s divorce unfolded.  While I still saw her as weak throughout most of the book, I did grow to like her and to appreciate her utter love and devotion to her little boy.  Austin I had issues with a few times.  He has a lot of growing up to do and he does it in a big way later on in the book.  I adored Sean from the very beginning and I was rooting for him from page one.

Other things happen that take the story in several different directions.  The reader is witness to what one parent will do to ensure the safety of their child.  You know who the bad guy is pretty much early on but surprises are in store in how he is revealed.  The resolution and ending are both perfect.

You never know what you are going to get when you sit down to a Rick R. Reed book.  One might be full of horror and another might be a sweet love story.  This is why I am such a huge fan.  If I am not in the mood for one type of story I know I can just grab one of his many others and find exactly what I am looking for.  Mute Witness takes an extremely difficult subject and gives the reader the horror of what happened to young Jason Dawes and the fear of it happening to him again.  It gives you a love story between two men who are working hard to make their relationship work when the unthinkable happens.  But mostly, it gives you the power of love between parents and a child.  That is what is center in this book:  the love from Shelley and Sean to their son.  Regardless of their differences in the past, Shelley and Sean know beyond doubt of the other’s love for Jason.  This is written beautifully and you, the reader, can feel it from the pages of the book.  Your heart will ache for Jason and that pain will extend to his parents and Austin.

Another outstanding book by one of my favorite authors.  You simply cannot go wrong with anything he writes.