More Than Everything (Family #3), Cardeno C 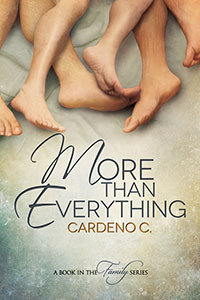 **Treat This Review as a Spoiler Review**

…let’s just say that with our first kiss, Scott Boone captured a part of my heart, and no matter what happened after that day, that part of me would always belong to him.

More Than Everything spans the life of Charlie (Chase) Rhodes from approximately sixteen, and his first crush on Scott Boone,  to approximately thirty five. It skips through periods of time but nothing was missed.

The narrative is mostly Charlie’s but Adan, and later Scott, get POV as well. It is told from the perspective of someone looking back through time via a scrapbook or photo album and every picture – or occasional note – leads to a story relating to it –

This one isn’t a picture, but it’s still going in the album. I’m not usually one to fixate on dates or times. But there are a few things, a few dates, I’ll never forget.

Because Charlie is reminiscing it never becomes maudlin, even in moments where you know that Charlie’s heart is heavy, and something sad has happened, because he is a very upbeat person. So the book is never angst-y  as such, but it is easy to deeply empathise with Charlie.

At sixteen Charlie meets Scott when Scott’s father (and Scott) are delivering furniture to an apartment that Scott and his mother are moving into. Scott is very hot and Charlie offers to help them with the furniture delivery –

I wanted to be with Scott, and if manual labor was the price of admission, well. I was willing to pay for my ticket.

From here they soon become fast friends. However, Charlie would like more but he doesn’t know if Scott is gay. Charlie’s dad has long since left and his mother works incredibly hard, long hours to support the family. Scott’s family are nice and look out for Charlie when his mother is working long shifts. His sister and Charlie get along well and they support each other. However, as they get older, his mother and sister clash when she starts dating older, married men. Charlie is flamboyant, small and unmistakably gay. He is a dancer and he gets bullied at school. Because Scott has moved into the apartment next to Charlie’s they can communicate via window – their bedroom windows are next to each other as well as the fire escape. Scott helps to keep the bullies away at school, he is popular and a varsity footballer. After a time of getting to know one another, doing schoolwork, and being friends, they kiss and become secret boyfriends, as they get older not so secret. But after a while Scott decides to study in Nevada where is biological father and stepmother live. They continue to keep in touch until Scott stops. By the time Charlie is twenty they have drifted and their communication has dried up. But Charlie does not forget Scott. He was his first love.

Five years on, and no major love interest later, Charlie is out one night at a bar with his BFF, Selina, when a drunken girl asks him to take a photo of a group she is in. One of the guys in the photo takes an interest in Charlie. Charlie is now using the name Chase, as he dances professionally. Adan Navarro is a straight-acting gay guy, his parents do not care for the fact that he is gay at all. He comes from Nevada originally, but he is in New York studying to become a lawyer and he is quite driven in what it is he wants – the best opportunities and to become a partner in a law firm one day. He isn’t the most social animal. Here the books splits into two perspectives – Chase’s and Adan’s – and here is where I struggled the most with More Than Everything. To say I hated Adan Navarro would be the understatement of the year. He is a prick with ears, he is selfish and allows that to manifest in sleazy, outwardly hurtful behaviour. I did not care that his parent’s did not like his lifestyle, I did not care that he did not have the greatest social skills. I did not care that sometimes he bought Hydrangeas for Chase – his favourite flower. I had zero empathy for Adan.  I could not read the parts where Chase and Aden had sex. I’ll be honest, I nearly put the book down when Chase was with Adan and walked away permanently –

Chase was not someone who would help me make partner at a good firm or get appointed to a seat on an appellate court or start a political career.

The man was nice. I was willing to admit that. And my traitorous body found him attractive, something I wouldn’t deny with the proof throbbing between my thighs. But at the end of the day, Chase Rhodes was a joke, and if I brought him around, people would think I was like him; they’d be slammed with his image of what it meant to be gay and put it on me.

Adan’s thoughts juxtaposed against Chase’s are quite jarring for me. Chase, who felt that the nights they stayed in, the reason he didn’t meet Adan’s friends, his family, was because Adan was a loner and his parent’s lived out of state. That he had a good heart and maybe he loved Chase like he had grown to love Adan, I don’t now why he loved Adan – he was always about getting into Chase’s pants from the moment he met him. It always came across like it was physical, sleazy. The reality isn’t quite like that but…..However, Chase felt there was a need in Adan for him, and there was, but not enough and not for the right reasons. But this was the first time in five years that he had let himself feel like this again after Scott sadly disappeared from his life  –

Adan had a hard shell around him, sure enough, but I thought maybe I could be the one to crack it, which would make me special. And special people were held close, not thrown away.

Which brings me back to Charlie (Chase.) He is gorgeous, charming, sweet, has a sense of self worth and expects someone who is with him to treat him right. When Adan calls him a ‘good little cocksucker’ Charlie pulls him up for it, big time. Scott and Charlie breaking up or fizzling out I could understand. They were young and it was inevitable. Adan, at twenty seven into twenty eight? No! His behaviour was poor.

But Adan does throw Chase away one night when they are out getting a meal and a senior partner at a law firm that is interested in Adan sees him with Chase. Adan can’t do enough to distance himself from Chase. He is rude and when Chase confronts him afterwards Adan tells him to ‘stop being a drama queen’ which, because we see Adan’s perspective, we know he knows is not correct. And we as the reader know the truth –  Chase is not a drama queen. He takes care of Adan and treats him better than his own family. But the damage is done and he doesn’t do anything to make Chase feel anything but used…until it is way too late. So my hatred of Adan was sealed. In all fairness Cardeno C showed the reader that Adan regretted it deeply but, for me, I remained unmoved.

Ten years pass and a tragedy occurs. Suddenly Charlie finds himself with two young children and living in Nevada, and as fate would have it he meets Scott and Adan who are partner’s in a law firm and have been a couple for five years. When they see him it is a surprise to Scott that Adan knows Charlie, and that he calls him Chase, and Scott knows Charlie, an was his first love. No matter, they both want Charlie back in their life again, children and all. I struggled a little with this part as I was angry again with Adan calling Charlie “baby.” I was also unimpressed with the lack of (major) grovelling that this pair did to ‘win’ Charlie back over. I was disappointed he went with them. I was disappointed that they spoke about looking after him (with Charlie in the room) so that he could have a better life with them as the strong men who go out to work with Charlie at home. I get it, he is struggling to look after, support, and be a parent for the children…and work as a dancer. I also got peeved about the fact that Charlie is the “bottom,” and they are both “tops.”

There is no denying that there is a most engaging quality to this book. And technically, creatively, the writing is pretty darn good. The narrative is definitely interesting – and I would rather have intense emotions than none at all. I really wanted to love More Than Everything and without Adan I would have 5 starred it. I can see why Cardeno C has a dedicated following of readers, but I struggled with aspects of the characterisations. I knew what was coming, though, and after Aden I dreaded it, but I thought ‘maybe Aden will do some major making up.’  Personally, I didn’t feel it. Chase was lovely and he absolutely made this book for me, but he forgave too easily – not that he was a grudge holder, he wasn’t – but, well, I just wanted more grovelling.

If you like a reunion of characters. If you like the idea of people getting a second chance, of first loves finding each other again. If you are more forgiving then me (it seems I’m not 🙂 ) If you like a ménage that is lighter on sex, if you like HEA’s, and a bit of hurt that is more an upbeat blip than angst, then More Than Everything may be just what you are looking for.

This looks like a nice story but I could tell that I would have MAJOR problems with Aden. I’m not very forgiving when it comes to jerk MC’s so I’m not sure I could have overcome that. Possibly though. 🙂 Great review, as always.

I actually agonised over the rating of this book because of Adan, Cindi. BUT…it was written in such a way that I had to know what happened to Charlie. He was so engaging. He reminded me of someone I know really well – dances (ballet preferred), obviously gay – that is why I think I hated Adan so much. But Charlie deserved what he wanted…and he wanted Scott and Adan. See, I am talking like they are real so I enjoyed the book 😀