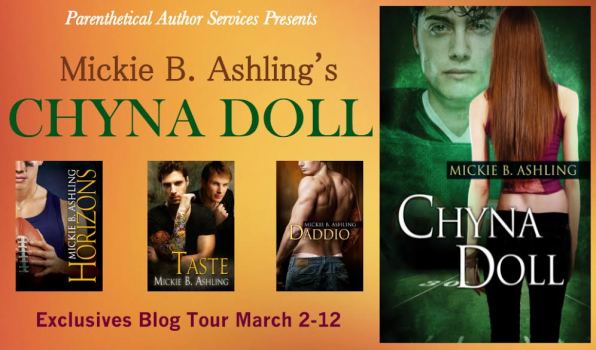 Many thanks to On Top Down Under Book Reviews​ for hosting my Chyna Doll blog tour visit. Although this is the fourth novel in the Horizons series, it can be read as a stand-alone. We’ve moved ahead several years and Grier’s son, Luca, who was seven when the series started, is now almost fifteen. Clark and Jody are stepping in as surrogate dads while Lil and Grier are in Italy for a month trying to re-capture Lil’s joie de vivre which seems to have disappeared. In the exclusive excerpt I’m sharing, Chyna, Luca’s love interest, is trying out for a modeling career.

To celebrate the release of my new novel, I’ve brought along some goodies to give away, so stay tuned to see what you can win. 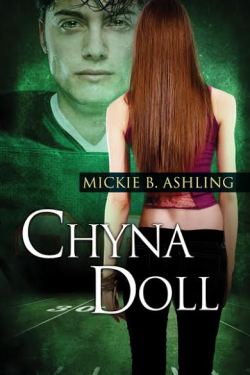 “Get naked so I can see what I’m working with.”

Melinda rolled her eyes and pushed her toward a door that led to a tiny bathroom. “Change in there for now, but you’re going to have to get past this hang-up, or you’ll never make it in this business.”

The door shut, and she clutched the dressing gown against her chest. How on earth was she going to get through this without giving herself away? Then she remembered that Dan already knew she was flat chested. His experienced eye had picked it up in a second, so it shouldn’t come as a big surprise to Melinda if she wore a Wonder Bra. Taking off the compression panties was out of the question, though, and if they forced her, she’d walk out.

Chyna removed her jeans and T-shirt and put on the light robe. Melinda took her clothes when she walked out of the bathroom and silently hung the items in a closet alongside a bunch of colorful outfits. She pointed toward the chair in front of a large mirrored station cluttered with jars, bottles, cans of hair spray, flat and curling irons, hair dryer, foam curlers, brushes in different sizes, and clear acrylic containers jammed with makeup.

She stood behind Chyna and massaged her shoulders gently. In the mirror, Chyna could see Melinda smiling. Straight square teeth gleamed behind the plum-colored pillows. “Are you okay, hon?”

“Don’t be nervous,” she said, grabbing Chyna’s hair with both hands and twisting it expertly into a knot atop her head. “You have beautiful hair,” Melinda noted while she pulled a few tendrils loose on either side of her ears. She twirled them around the curling iron and continued to chat as they “baked.” When she released the wand, the hair fell in soft curls around Chyna’s face.

“So do you,” Chyna reciprocated.

Melinda nodded. “My hair is one of my better features,” she admitted, “but black is common, unlike your lovely red-gold. Is this really natural?”

“Do your parents have red hair?”

“My father.” Chyna realized Melinda was asking questions to put her at ease, and she was grateful.

“Have kids given you a nickname?”

“Most redheads are called something. Ginger if you’re hot, carrot top if you’re not.”

She shook her head. “If they do, I’m not aware of it. People call me by my given name.”

“Chyna is unusual as well; it suits you.”

“As you should,” Melinda said. She spun the chair around and lifted Chyna’s chin to inspect her face. “Your pores are practically nonexistent, and where are the freckles? When Dan told me he was trying out a ginger, I figured I’d need a jar of concealer.”

“I’ll say,” Melinda said, studying her with interest. “Do you pluck your eyebrows?”

“Just the few stray hairs underneath the arch,” Chyna replied.

“Did anyone teach you?”

“I read an article once in SELF magazine,” Chyna said.

“Most girls tend to overpluck and then you have to draw on the brows, which can get tricky. Thank goodness you didn’t mess with yours.”

“In all honesty, I couldn’t be bothered,” Chyna admitted. “I’ve got enough to worry about.”

“Like your lack of boobs?” Chyna’s head snapped up, and she realized Melinda was teasing. “Don’t get salty on me, sweetheart; I’ve been there.”

Her dramatic eyes rounded in amazement, and she took handfuls of her own breasts. “You think these girls are real?” Unbuttoning her blouse, Melinda revealed a set of perfectly proportioned globes. She wasn’t even wearing a bra to hold them up.

“They’d better be amazing for what I paid.”

“Cooperate with me, and I’ll make you look so gorgeous they’ll be begging you to sign a contract.”

Lil Lampert’s forty-fifth birthday turns the effervescent architect into a brooding mess, and his partner, Grier Dilorio, takes him to Italy to help him regain his zest for life. The timing is bad—almost-fifteen-year-old Luca has just started high school, and his mother and stepfather are also traveling. Luca is left in the care of Chicago Bear, Clark Stevens, and his partner, Dr. Jody Williams.

Growing up with two dads and two gay uncles has given Luca a unique perspective on gender roles, but not all the answers. He’s had a secret crush on his straight best friend, Chip, for years. Suddenly, Luca finds himself attracted to Chyna, Chip’s twin sister. Now he’s wondering if this means he’s bisexual.

Born with a sexual development disorder, Chyna should have been raised as a male, but due to an epic parenting fail, is being raised as female. Hiding the truth becomes more difficult when Chyna hits puberty, and crushing over Luca adds another element to Chyna’s struggle to fit in.

Is Luca’s moral compass strong enough to guide him successfully through this period of discovery or will he succumb to peer pressure and shatter Chyna’s dreams for happiness?

Mickie B. Ashling is the alter-ego of a multifaceted woman raised by a single mother who preferred reading over other forms of entertainment. She found a kindred spirit in her oldest child and encouraged her with a steady supply of dog-eared paperbacks. Romance was the preferred genre, and historical romances topped her favorites list.

By the time Mickie discovered her own talent for writing, real life had intruded, and the business of earning a living and raising four sons took priority. With the advent of e-publishing and the inevitable emptying nest, dreams were resurrected, and the storyteller was reborn.

Mickie loves to travel and has lived in the Philippines, Spain, and the Middle East but currently resides in a suburb outside Chicago.

Using Rafflecopter below, enter to win one of these prizes (contest open internationally): a $20 Dreamspinner gift certificate, one of five ecopies of Chyna Doll, any two ebooks from Mickie’s backlist, or a signed paperback of Chyna Doll. Must be 18 or older to enter.

March 11 – On Top Down Under Book Reviews

March 12 – Sinfully…Addicted to All Male Romance

this sounds so good!

It really is good, Lee. A new favorite for me.

Nice excerpt and giveaway. I don’t get tired of seeing this beautiful cover and, of course, I love your review, Cindi 🙂

Thanks, Kazza. I love the cover as well. It’s so fitting for the story.

Amazing review! And thanks for another great excerpt. I’m so excited to read this book. It’s definitely on the TBR list.

Thanks (re: my review). It’s a great book and I have no doubt you’ll enjoy it as much as I did.

I enjoyed reading the excerpt and it was great to read the review to, the book sounds so good.

Thanks, Shirley. It’s an outstanding book.

I definitely want to read this!

A huge thank you to Mickie B. Ashling for stopping by On Top Down Under as part of the Chyna Doll blog tour!

I couldn’t wait anymore and got my hands on it. Hopefully, I will start the series on the weekend. Thanks for the giveaway and the review!

Thanks for another great post. It’s great to see a review as well.

I am really looking forward to reading this!

Huge fan of Mickie B Ashling, especially this series and the Polo series!! Thanks for the giveaway!!

A lot of insight into Chyna in this excerpt. I’m definitely looking forward to reading more!

I posted a comment yesterday but it’s not on here. I’m really looking forward to giving this a read and seeing how the author tackles a transgender character. Thank you for the review =)

H.B., your comment showed up on my actual review yesterday. Sorry for the confusion. I hope you enjoy Chyna Doll as much as I did. It’s an outstanding book.

I am enjoying all the excerpts on this tour. And the book cover is lovely. Thanks!

Nice to get more insight into Chyna. Thoroughly enjoyed reading the review! Thank you!

Another interesting extract from the book and intriguing to how the story develops. I remember running a training course at a shopping mall and there models handing out leaflets for another event. I was so surprised that after we started talking they were quite happy to let me know they had false breasts, but I was also impressed how self-confident they also were. Thank you for the giveaway chance