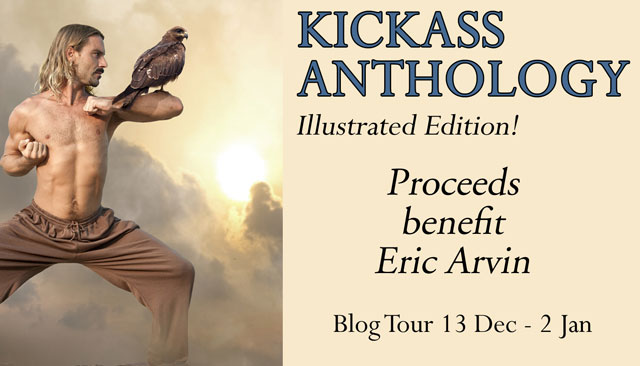 With a special foreword by Eric Arvin’s sisters, Angela Arvin-Young and Amy Arvin

Blurb:
Against bad odds, he persevered. Wit, grit, and guile pulverized his scary opponent into a sad pile of dust.

Even a kickass hero needs a hand from a secondary
character, and Eric needs that extra power boost right now. This anthology is a volunteer effort organized by Eric’s fans and fellow writers in order to help him raise funds and help cover the cost of his high-tech recovery. His wicked sense of humor is intact, but his body needs a bit of help.

These stories are meant to inspire. They’re a warm hug, a wave from afar, a wink and a nod. Discover new authors and graphic artists as you, too, get revved up to slay whatever ails you!

A Note from the publishers:

KICKASS ANTHOLOGY was produced in order to raise funds for the medical recovery of our friend, colleague, and author, Eric Arvin.

All artwork, both written and graphic, was donated free of charge.

All proceeds will go directly to Eric Arvin and his family.

For a chance to win a $25 Amazon Giftcard
Enter Link Below:

Thoughts on doing it for the first time: Nancy Hartman. 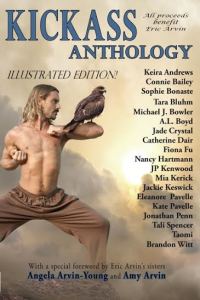 They say you never forget your first time. First kiss. First love. First job. First time you make a pie from scratch and it turns out good. First time you send a child off to school by herself. First time you hold a grandchild in your arms. As you get older, the firsts become more and more rare. After all, when you’re young, just about everything you do is a first.  When you get older, there aren’t so many firsts left — including some I plan to skip. Like first ride over a jungle on a zip line or first bungee jump at the Royal Gorge Bridge.

I haven’t been what you’d call young for a long time. However, A Holiday Homecoming is my first; the first story I’ve written and finished since grade school. I’ve been stringing words together since just after the earth’s crust cooled. In fact I feel partly responsible for killing off whole forests in the name of advertising, public relations and other crass commercial pursuits. The truth is, some of it was fun. Some, thank god, still is.

I shall never forget what it felt like to hear one of the first spots I’d written come out of the radio in my mother’s kitchen. And oh, the thrill of seeing a billboard I’d worked on hanging right there on the wall of the New York City subway! I’ve spent decades writing all kinds of stuff from jingles to newspaper articles to TV scripts to Chinese Fortune Cookies. Now I can add M/M romance. I’m kind of proud of that.

But wait. There’s more. Not only is A Holiday Homecoming my first published story. This is my first blog post.  And I want to spend a few lines of it thanking the people who helped me get this gig. Thank you to Josh Lanyon for introducing me to a genre – a whole world — I never knew existed. Thank you to Kate Pavelle for organizing this splendid project and for taking a chance on me. Thanks to Rhys Ford for her generous spirit and for not suggesting I go find another hobby. And to B. G. Thomas for reminding me to “Leap and the net will appear.” Thank you to Diana Copland, J. P. Barnaby, Dan Skinner, Cat Grant, Kindle Alexander (both of you), Brandon Witt, Kaje Harper, Sam McAuley, Jo Peterson, Abi Roux, Cherie Noel, Lynn Lorenz and her voodoo doll, Ethan Day, and everyone I met at GRL – the list is a veritable who’s who of the best LBGT writers and you know who you are. Heartfelt thanks to T.j. Klune for his day-by-day posts on Eric all through last winter and spring. Tj’s profound humanity and extravagant gifts as a writer captured my heart and kept me going when I was ready to give up.

And the biggest thank you of all goes to Eric Arvin himself.

I couldn’t have, wouldn’t have been able to do any of this were it not for Eric. His indomitable spirit was the kick in the ass I needed to sit down, write and above all, finish. I must have made a dozen false starts. Each time, I’d choke and go into panic mode. It wasn’t good enough. Nobody would want to read it. I’d edit the first two paragraphs to death. I couldn’t figure out where to go with it. I’d avoid the computer for days. I didn’t even dust the keyboard. Then I’d see another Facebook post from Tj, and I’d think about Eric and try again. That reminds me. I guess I should thank Yoda, too. “Try not. Do… or do not. There is no try.” Well, there was no “do not” either.

It took me three months to finish. Is that a world record or what? I wanted more than anything to write a happy ending for Eric: writing something for the Kickass Anthology will have to do for now. You never know. The power of the written word is beyond imagining.

A year ago, I was a newbie on Facebook. It never occurred to me that you could “friend” an actual published writer. I started with a few “likes” and a few comments and before long, I was part of the conversation. One of the biggest thrills of my life was when I got to GRL and some of my heroes – authors I’d been reading and admiring the hell out of – already knew who I was!

Okay, so now everybody knows this is my first time. But it is not the last. I have lots more stories to write (and let’s be honest here, I still have a thing or two to learn).  Listen, Laura Ingalls Wilder was 64 when she published the first Little House book.  If my driver’s license is correct, I’ve got her beat by a mile. Grandma Moses started painting seriously at 78. Look out, Grandma. I’m just getting warmed up.  Thanks for reading.

Nancy began writing in elementary school with the epic of Ernie Erectus (!) whose exploits created the world and everything in it. After coming up with the sweeping theory of everything at the tender age of eleven, she went on to earn a living writing nearly everything from adver- tising, to program notes for ballet, grant proposals, tv and radio scripts, reviews on Amazon and fortune cookies. In 2013 she discovered the world of M/M and found Mr. Erectus was there waiting for her.

Reach her on FB under Nancy Hartman!

Great post I enjoyed getting to know you Nancy and I’m looking forward to reading your story and the the others in the book. Lots of love to Eric and his family.

Hi the Rafflecopter is not working for “Kickass Anthology!!!

Shirley, I just entered you using your email address. Not sure why the link wasn’t working, but I made sure your entry went through.

Hi, Shirley. The Rafflecopter is working just fine. I also just tested it out to make sure. Thanks for entering Shirley, Cindi 🙂

Thanks for the great post! I can’t wait to read this anthology! Lot of love and well wishes to Eric!

I agree, Jen CW, the anthology comes from the heart of all those involved in making it happen. As a blog, we send many heartfelt wishes and much love and support to Eric Arvin. He was a great supporter of our blog and is a decent and strong man dealt a rough hand. I hope many people buy the anthology and support him.

Thank you for the post. I’m really looking forward to giving this a read =) Wishing Eric all the best!

Thanks, for stopping by, H.B. We agree, we are certainly wishing Eric all the best 🙂

All the best to Eric in the new year!

It’s so good of these writers and artists to do this. I’m buying a copy for myself for Christmas. All the best wishes to Eric and his family. It was good to read a post from a new author too. Merry Xmas everyone. 🙂

The MM community is so full of love and support and this anthology proves it. Glad you wrote your happing ending for Eric Nancy. So sweet 😀

Such a great project. Wishing Eric all the best as he continues to recover. 🙂