For The Long Run, Elizabeth Noble 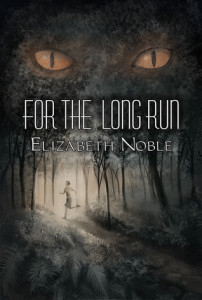 Jason (Jay) Malloy, at twenty-four, is the manager of a hunting lodge that belongs to his mother and father. Two years out of college and his professional life is moving along steadily.  His personal life, not so much.  His father, Stephan, is a senator who is all about public appearances.  His son being gay?  Not happening. Jay’s mother, on the other hand, is very supportive of her son both privately and publicly.  Stephan controls everything in Jay’s life and makes a habit of showing up at Jay’s place (a residence on the lodge property), using his own key to get inside any time he chooses.  He has chosen a bride for Jay, Kellie, regardless of how Jay feels about it. In fear of his father, and not wanting to hurt his mother, Jay publicly goes along with the fake engagement even knowing that he could never, ever be intimate with a woman.  Kellie is not a horrible person.  But then again, Jay knows very little about her other than she was specifically chosen for Jay by Stephan.  There is no sex between Jay and Kellie and they are only together during public events with occasional hand holding and Kellie may, on occasion, lean in and kiss Jay on the cheek. Jay is miserable.

To let off some steam, Jay drives an hour outside of town to a sports bar that is frequented by gay and straight people alike.  After nursing a beer for awhile, he notices a man, Eric, sitting in a booth not far from him. A glance here, an eyebrow raised there and the two men are sharing dinner and drinks.  Before long, they are in a motel room across the street from the bar.  Jay is a natural submissive so when Eric jumps in to take charge, Jay is so hard he can barely stand up.  Eric is a Dom who is obviously very skilled in every aspect of BDSM.  One night they share together.  They exchange numbers but Jay knows he’ll never call the man even if he would do anything to be on his knees for him again and again.  No way will Jay bring someone, a man, into his crazy facade of a life.  Little does he know but he is about to see Eric again.

Murdered men are being left on the grounds of the lodge.  Each victim is cut up and some of their internal organs are missing.  The investigators believe that each man is murdered in a different place and left at this (not so) remote location, the same location for each body.

(Which leads me to a question:  If each body is disposed of at the exact same location on the lodge property did no one think to set up video cameras in order to catch the killer as he/she dumps the bodies?)

Each murder victim has been at the lodge and come in contact with Jay at some point.  Some were only passing through for shopping or dinner in the lodge restaurant, one was a short-term employee and another Jay met briefly at a political event.  Stephan, going behind Jay’s back, has hired a new head of security for the lodge though hiring and firing fall under Jay’s job description.

Imagine Jay’s surprise when he comes face-to-face with his new head of security.  The man sitting in Jay’s office is none other than Eric Keger, the man who has remained in Jay’s thoughts since he left him only a few days earlier. Needless to say, Eric is not pleased that Jay never called him after the hottest night of sex in his life.  After a lengthy discussion and a lot of embarrassment on Jay’s part, it is decided that Eric will keep the job offered to him and that Jay will help him investigate the murders.  Of course, the D/s relationship is to pick up where it left off a few days earlier.

What worked for me:

– Jay.  He just wants to be given the chance to love who he wants to love without being bullied by his father. He is a nice guy and his submissive side is written very well.  However, a few times he was ordered (by Eric) not to do something in regards to his father and he did anyway.

– Eric.  I love everything about him.  He’s Jay’s lover and his protector and he does both extremely well.

– Jay’s mother.  There is nothing about her that I did not absolutely love with the exception of one time when I felt she should have stood up more for her son.  Otherwise, she was perfect.

What did not work for me:

– The murders and later, the killer.  I knew almost immediately who the killer was.  Normally that hurts the rest of the story for me but it did not in this case (early on) as I was eager to find out why. When the why came out is when I was disappointed. This person is revealed in a big way but once it was all over I found myself questioning everything I had just read.  Specific comments were made by the killer that did not make a lot of sense to me in the whole of things.  I can’t elaborate without giving it away.

– Stephan Malloy, Jay’s father.  Early on he was written as the perfect homophobic bastard.  This continued throughout the story.  I kept waiting for something major to happen with him and Jay and it did but not in the way I expected.  That particular resolution, while permanent, did not work for me.

– Kellie.  Where did she come from?  How did Stephan find her for Jay?

– The insta-love between Jay and Eric.  On Jay’s part, I got, as he was desperate to find love.  On Eric’s, not even close.

– Jay.  Yes, he’s mentioned in what did work for me but there are some things about him that did not.  His relationship with his father for one.  A threat from Jay to publicly out himself to the media would have ended all the abuse (both mental and physical) that was inflicted on him by his father. He was willing to marry a woman because his father told him to.

– A few details are thrown out here and there in regards to Jay’s past.  There is a sum total of two sentences in regards to Eric’s.  He is a main character.  I needed more.

– The story took an odd turn toward the end.  I knew going in that ‘odd’ was a possibility but this went a little beyond what I was expecting.  I know it wasn’t supposed to be realistic but it was still too much.

– The killings and the mystery of the killer were put on the back burner and not fully realized (in my opinion).  There is a lot of sex in the story and only rarely do I complain about it being too much but I felt that the sex scenes completely overrode important issues that needed to be addressed.

Overall, I will say that I did like this book but I am a stickler for certain details and I ended this book feeling like a lot was missing.  The sex is hot.  Jay and Eric are perfect for each other.  But I felt that the killings were thrown in just to add a little drama to the story. The author does take the reader farther down the road so we can see where Jay and Eric are a little later in their relationship. I had hoped to see an answer or two in regards to other things as well before I got to the end. Unfortunately, that was not the case.