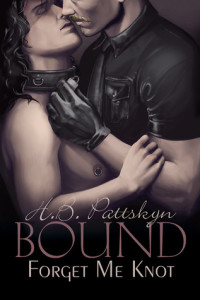 ** This review may contain what some may consider spoilers.  I have tried to keep them out but some may have been missed.  Keep that in mind before reading this review. **

Jason has always been fascinated with all things BDSM but has been leery of going beyond a little bondage with his on-again, off-again boyfriend of five years, Terry.  This collar, and this man, make Jason want to explore and to figure out if the submissive feelings he has are a fluke. Henry demands asks Jason if he would be willing to model the collar during a demonstration later and he agrees. After getting extremely aroused by being tied up in front of others, Jason knows that he has to explore further. Henry is more than eager to show Jason the ropes (pun intended).  After a whirlwind weekend in and out of the bedroom with Jason immediately taking to being a submissive, the two men must part ways and Jason is forced to go back to the real world.  The real world that consists of a father who doesn’t want him, his father’s girlfriend who wants him even less, a best female friend Kendra (who in reality could never be considered anyone’s friend), and to Terry, who has made it clear over the past five years that he is not the best boyfriend material. But Jason is unable to leave Henry in his past. He wants to be tied up, spanked.  He wants his Master, or his Sir.  Henry lives several hours away from Jason so continuing their physical relationship is not an option.  A phone call to Henry during a bad moment a few weeks later brings Henry and Jason together yet again, albeit only long distance.

The first half of this book was quite good.  I could immediately wrap my head around Jason and Henry. Granted, Jason trusted this total stranger way too easily but somehow it worked.  The weekend consisted of a lot of bondage as well as various BDSM toys used on Jason (flogger, whip, etc.)  It was (I thought) understood that the relationship would last the weekend only as far as Henry was concerned.  He showed a hint of emotion here and there but he made it clear that he was a Dominant and would not be giving up that role with others for anyone, including Jason.

There is a large age difference between Henry and Jason, which I love.  Henry is forty and Jason is twenty-two.  I’ve read other reviews where this bugged other readers.  I am not one of them. Initially I found Jason to be too needy and too eager.  This is proven as the book progresses but the reasoning behind it is understandable.  Jason’s mother died when he was seventeen and he was forced to live with a father who did not even know he existed until he received a phone call about Jason’s mother’s death.  This leads me to Greg Saunders and Alicia, Jason’s father and girlfriend.

Greg would never win a father of the year award.  Jason never asked to be born and he most certainly would never have chosen to live with someone who made it clear on a daily basis that he didn’t want him.  The same applies to Alicia, Greg’s girlfriend.  Characters who are quick to degrade and demean the ‘little people’ (meaning those who are less fortunate) anger me. The author did an outstanding job in making Greg and Alicia unlikable.  They were very easy to hate.

Then there is Terry, Jason’s on-again, off-again (currently off) boyfriend.  Terry is at the convention during the time that Jason meets Henry and he got annoying quick, which I am sure was the author’s intention.  Throw in Kendra, Jason’s so-called best friend and the horrible characters in Jason’s life kept coming.  The kid didn’t stand a chance. No wonder he latched on the Henry so quickly.

Going back home after the weekend with Henry brings one problem after another to Jason.  His father refuses to help him even a little bit with college or living expenses so he is forced to work extra hours as a server (not making much money) and pay all of his tuition on top of being forced to live under the same roof as his horrible father.  His horrible father, who is extremely well off financially and should have no problem loaning his son a few hundred dollars for his classes.  My heart broke for Jason and what he was forced to live with on a daily basis.

Suddenly Terry is trying to turn over a new leaf and has decided to play the game of “perfect boyfriend” in order to win Jason back. Unfortunately, Jason, needing and wanting to be loved so badly, somewhat falls for it.  There’s Kendra who is the ultimate token bitchy female (you know what I mean, in 99% of M/M books there’s always one. Throw in Alicia as well and we have two in this particular book).  Kendra feels that it is her duty to order Jason around and demand that he stop seeing Henry.  No seeing him.  No contact at all.  When all the Kendra stuff was going on I was thinking “Why in the hell do you put up with this?  Hang up the phone and block her number”. Of course it takes awhile before Jason grows a pair and stands up to the girl.

Jason and Henry go back and forth via texts and the occasional phone call.  At an especially emotional time for Jason, Henry even surprises him with a visit.  Otherwise everything between them is with each several hundred miles away from each other.  Jason sticks with his sub role, following orders given to him by Henry with the exception of one pretty major instance.

I had originally typed my review listing a major spoiler in regards to Jason.  After going back and forth for hours, I finally decided to delete what I had typed as what he did is discussed at length on Goodreads and my listing it here would make an already too long review that much longer. Suffice it to say that Jason does something that is not inline with a good submissive and what he does is my biggest pet peeve when it comes to books.  I am choosing to overlook it as other things took precedence later.  I am still not pleased with this particular turn of events but I do not wish to go on about it here.  I have already given my blog partner a private earful in regards to it.

Also note that the ending is not, in fact, the ending as the story is continued on the author’s website.  I was not made aware of this until after completing the book.  At the time of this writing, the author has posted two chapters that continue Bound: Forget Me Knot and these chapters were added weeks ago.  As I am not one to stalk author websites for updates, my seeing this story to completion is unknown at this point.

I enjoyed the story and became a fan of the author’s writing style almost immediately.  However, unless it is stated up front in regards to other books of hers that they are complete or part of a series, I will hold off before I jump into another.  This would have easily been a 5 star book for me had Henry showed more emotion, had Jason not done what he did (mentioned above) and had the book not ended so abruptly.