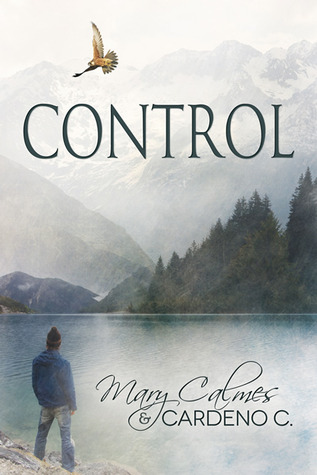 Vy Aleknos lives in the small town of Elk River, Colorado. He is twenty eight and he has a construction company. He is also a hawk shifter, the kaur of the Elk River ket. The kaur is the ‘alpha/leader’ and the ket is the hawk equivalent of the ‘pack/clan.’ He’s gay, some of the ket and some of his family don’t like it, most are good with it. His immediate family have no issues and his father, who was the kaur prior to Vy, makes it very clear that no one is to be intolerant, he won’t stand for it. 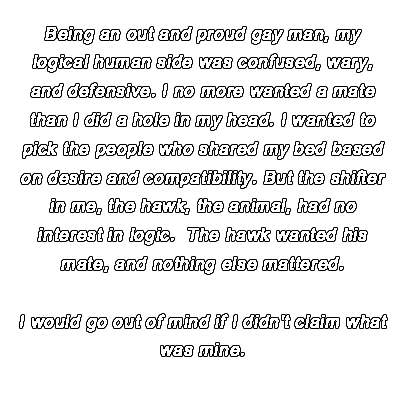 a female. Fate can be a fickle bitch, but he will accept what it has in store for him because, even though he is a contemporary man, he believes very strongly in his roots and the ket. Luckily his answer/mate comes in the form of a big, strong, gorgeous bear of a man, Robert Cimino. Robert is also immediately drawn to Vy, finds him sexy, and before you know it, they are bumping bits in an alley. Afterwards,  Robert is going to move on. Vy is confused and frazzled, you don’t do that with your mate. Mates bond and stay together. It is someone special you hope to find in your lifetime –  there are shifter rules to this whole mate thing and Robert doesn’t seem to get it. Nevertheless, Robert asks Vy out on a date when he sees how frazzled he is and…interesting –

I’ve never met a more stubborn and unnecessarily defensive man in my life. It was charming as hell.

Maybe they can be even more intimate. He doesn’t normally hang around. But for this little hawk he just may.

Robert Cimino works with nature, he lives in nature, and he wanders around. A lot. More specifically, he is a vegan bear shifter who meditates, does yoga and is quite zen-like. Oh yes, he also doesn’t shift. Ever. Robert feels he is a man first and foremost, not a bear. This comes to 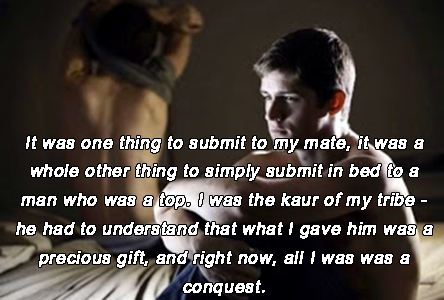 light after Vy and Robert have sex. For the first time Vy lets go and submits to another man, and it’s beautiful. But that feeling doesn’t last long. When Vy flies out to surprise Robert where he is working, Robert doesn’t recognise Vy in his bird form, thinks he is just another hawk. Mates always recognise one another. He now learns that Robert keeps his animal half under wraps so his mate bond is not activated. He can’t know Vy is his mate. Vy believes he can only ever be just another man, another fuck to Robert. Vy feels Robert coursing in his veins but Robert won’t be able to feel that. Sure, Robert’s scent changed after they were intimate, but only Vy will know it and feel it. Not Robert. This totally devastates Vy.

I read a lot of paranormal books, always have, and the world-building is not really the primary arc here. Yes, there are some hawk descriptions and the sparest story of some territorial trouble with wolf shifters from White Springs. There are also titles like kaur, ket and ahir, and a story involving the concept of fate and a mate-bond, but that is really it. It is a romance book first and foremost, not a full-on shifter book. However, the backdrop serves as fuel for some romantic tension and some good points on how different people believe different things. Do we believe in tradition? Do we believe in fate? Should we be more logical about our choices? Should we discount things that someone close to us believes in? And sometimes we do need control, other times it’s important to be able to trust enough to let go knowing things wont crash and burn.

“You’re a blessing,” I told him, because it was true in more ways than one. “Please,” I begged him, holding out my arms. “Please, my bear, come to me.”

The pairing of Vy and Robert was really quite lovely. Sweet word lovely, 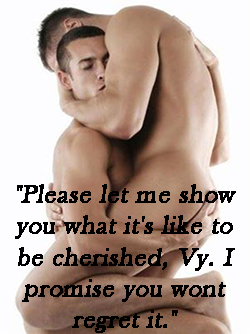 but apropos for Control. As the book progressed my initial feelings toward Vy flew out the door, every pun intended. I grew to love him and Robert was always very relatable – patient, calm (for the most part), accepting and sexy. Very, very sexy. He had his reasons for not shifting and you know some event will occur, it is easy enough to guess, but the telling of the story was a joy and the way two sides of a dilemma were presented was empathetic storytelling at its very best. I smiled about Robert’s impressions of Vy’s cottage, or is that den? How it is lovingly recycled inside from building sites that Vy has worked on, and it is warm and cozy and comfortable. And I loved that the book has the mandatory word I must have in my paranormal romance reading…mine –

I slammed my mouth against his as a reward for both of us, biting, licking, sucking, claiming. Something deep inside me rejoiced. Mine. Mine. Mine. The thought pulsed through my veins and throbbed in my mind.

It takes good writing to pull a reader back from thinking, ‘will I or won’t I continue reading this,’  to then giving said reader no choice other than to give the book 5 stars. Cardeno C and Mary Calmes did just that with me. I struggled initially with Vy (often) saying, ‘I’m the kaur of the ket,’ with the ket’s quick-to-jump-to-conclusions attitude about Robert. But I ended up engrossed in the MC’s and their story. It is a story full of love and emotion and strong characterisations. The sex is earth-movingly high on the sexual Richter Scale. Even if you are not a huge shifter lover there is a lot to like about Control as a contemporary MM romance. If you do like a paranormal with an emphasis on shifters and romance, some engaging MC’s, and a few interesting secondary characters, then I recommend  Control very highly to you.  Control is beautifully named, the cover is beautifully crafted and it all suits the writing to a tee. 5 Stars!

“There are many things I want to do to you, little bird.” I moved my finger lower and massaged his perineum. “Things I never thought about before we met.” I slid up his crack and pressed against his pucker. “I bet you’d let me, wouldn’t you?” I nibbled gently behind his ear and down his neck. “Tell me.” I tightened my grip and scraped my teeth across his sensitive skin, feeling my dick throb when he cried out. “Say it, Vy.”

“Say you’d let me do anything to you.” I increased the pressure against his rosebud, pressing the tip of my finger inside, while at the same time drawing circles over his slit. “Anything I want.” I slid my finger inside his hole. “Tell me you’d like it.”

This book was provided by the author in return for an honest review.

This looks like a nice shifter story. I can tell right off that I would like Robert. It sounds sexy and maybe a little sweet in some places. Your photos and quotes are (as always) hot. I really loved “… and before you know it, they are bumping bits in the alley.”

It is a nice shifter-light story. I really got involved.

They were indeed ‘bumping bits…’ Always good to do, er, research for the quotes.

You, my friend, are the QUEEN of research. I love that about you.

I’m glad someone appreciates me, lol.