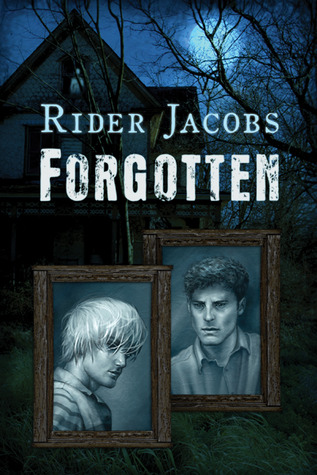 This review has spoilers. Keep that in mind before reading.

Some houses come with secrets, and some secrets should never be forgotten.

After eight years together, Peter and Rhys have finally achieved success: good jobs that keep them comfortably fed and a happy married life. The icing on the cake is their move from a small city duplex to a large farmhouse in need of repair.

Peter instantly senses something going on in the house that he can’t put his finger on, something a bit sinister. Things start to happen: whispers in the night, crying only Peter can hear, faucets that turn on for no reason. When Peter starts to dream of a dark-haired young man who tells him how much he loves him, he feels like he’s losing his mind, especially since Rhys doesn’t see or hear anything.

Only after suffering accidents and injuries does Rhys agree the house is haunted, and they’ll have to figure out how to fight a lovesick ghost.

Peter and Rhys have been together for eight years. Peter is an author of paranormal fiction and Rhys is a successful video game designer. Eager to leave the city, they purchase a large house in a small town of around 4,000 residents. The house has been empty, with the exception of renters here and there, for decades. The owner had stipulated that the house could not be sold under any circumstances. That changed when he died and it was put on the market for a steal. The minute Rhys walks in the house, he wants it. Peter, on the other hand, is hesitant. The house is huge and it sits on over 300 acres of land and will require a lot of work to make it into any type of home for the two of them. Rhys is insistent, so Peter agrees to purchase it and they begin making changes to the house almost immediately.

Peter and Rhys are as different as night and day. Rhys is all about organization and never having anything out of place. He’s a bit more out there and has a nice, quirky personality. I adored him from the very first page. Peter is a bit more serious in some ways, though scattered in others.

Before they even move into the house, things start happening. A shadow here and there and voices heard in rooms where there is no one. There are also the heart-wrenching sobs that only Peter can hear. Rhys experiences some of these things but he brushes them off as shadows and the old house settling. Peter, on the other hand, gets the full force of whatever being is in the house. He also dreams of a man named Alexey. Alexey, the ghost, is an interesting character. He had a horrible life while he was living and is wanting Peter to love him, to protect him. This, of course, is a problem because Peter is in love with Rhys. Alexey wants Rhys gone so he can have Peter all to himself.

I love how Alexey came to Peter in his dreams. They not only had real conversations but they did other things as well. Herein lies one of my issues with this book. While others may not have noticed it, I did. Forgive me for being anal, but Peter has a dream where he and Alexey have oral sex. Hot, sure, but later Peter and Rhys are in a library researching the history of the house and its former owner and not only is Peter asking the librarian about Alexey, but so is Rhys. When exactly did Peter tell Rhys about the ghost in his dream? Did he tell him about the sex part? If I missed it, my apologies to the author, but those lack of details bug me.

There are other issues as well. I am all about sappy sweet in books as I am a sap myself. However, there comes a time when the words “I love you” can be overused. Saying it often is nice. Saying it to the point of Rhys and Peter is a whole other thing entirely. Perhaps I would get it had they only been together a short time, but eight years? Hell, my husband and I have been married for more than a couple of decades and we still stay it often. But we do not say it almost every single time we look at each other.  It got to be too much rather quickly.

Then there is Alexey the ghost. I love how the author started telling his story. He was making himself known to Peter and he was wanting his story to be told. But I’m seeing Alexey as a missed opportunity. He had such a horrible life while he was living, yet this wasn’t fleshed out. I would find myself thinking more of his story was about to be told and then it would immediately go straight back to Rhys and their sappy sweet love for each other.

How did Alexey make it to the United States? What were the circumstances behind the former owner of the house, Demetri, coming to the states and bringing Alexey with him? What about his childhood? His family? How long was he here?  I had hoped that these questions would be answered during the actual resolution of the story but they weren’t.

This book builds up to something major. Alexey starts doing more than giving veiled threats in regards to Rhys. He actually starts to physically harm him to get him out of Peter’s life. He even tried to kill Rhys, though that made little sense to me. Alexey wanted to possess Rhys’ body so that he could be with Peter physically (and he had possessed Rhys’ body quite a bit during sex) but yet he tried to kill him? How could he possess a body and remain in Peter’s life if said body is dead? Then we get to the end and I’m saying “What the hell just happened?” Don’t get me wrong, I’m all about a happy ending but I felt more should have been added there so that I wasn’t saying “No way that just happened!” The forgiving of Alexey was done too easily. If Alexey was going to continue coming to Peter in his dreams, does this mean they would continue having sex in those dreams? How would Rhys feel about that considering they are supposedly so devoted to each other? Sure, I’m referring to a ghost, but isn’t that still cheating when you know you’ll be doing it? When the dreams aren’t really dreams. If you read the book, you’ll know what I’m referring to. It’s more like these things are actually happening and not in a dreamlike state. The “Let’s forget all about the ghost trying to kill my husband and let’s all three live in harmony – together – as one big happy family” was more than a bit much.

“One happy family,” Rhys agreed, giving him a hug.

Overall, I did enjoy the story, even if it looks like I didn’t. I just wish more time would have been given to Alexey and Demetri. I wish that the sappiness would have been toned down a bit. And I wish that the ending would have been more inline with the rest of what I had just read.  This could have easily been a 5-star read for me had the author focused a little more on the actual ghost instead of focusing so much on Peter and Rhys.  I actually found myself saying “You guys love each other. I know. We get it.” I will say that the sex is pretty damn hot between these two. The author wrote that very well.

I loved the sound of Alexey it would have been nice to know more about him. A ghost deserves a full-on backstory after all

Thanks. You know me and ghosts in books. I would have liked to have seen more about Alexey’s back story.

Your PS cracked me up. Lurve you too (smart ass).. LOL