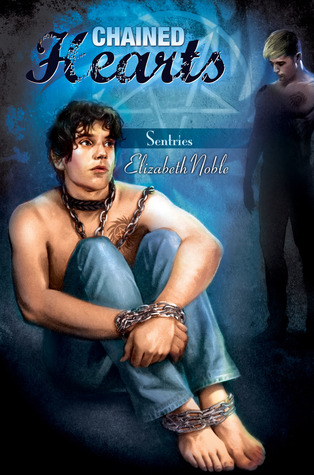 This book follows where Todd and Nick survived the attack from the kelbit and ran away to not be forced to join the army Vice Chancellor Victor Raleigh forced on sentries and Gifted humans. Todd and Nick are “Wanted.” They try to find a place where people do not care about their past, but about the help they can do and to live a “normal” life again, without fear from monsters and evil people that will try to force them to do things they do not want.

Todd’s ill and the bite that Nick got from the kelbit are worse, for a long time they try to live in Nature and survive that way, but Todd’s so ill that Nick fears he will die and finds help in the town Elk Ridge.

Todd’s unconscious many days and he needs medicine to survive the illness, Nick will not have the doctor to take care of the bite before he knows Todd’s ok. Only after Todd’s conscious, and Todd says to him that he needs to get the bite treated, Nick will finally let the doctor see to it. The doctor tells Todd and Nick that he’s seen that bite a long time ago from another sentry, that bite will over many years change Nick to a kelbit, too, without the bite being treated.

The doctor’s taking Todd and Nick into his home and they are like sons to him, the doctor is taking Nick as apprentice and learn him to help people that way, almost every person in the town are nice to Todd and Nick.

There’s a woman that from the start wants to force Todd to be her husband. She does not care that Todd and Nick are Mates and bonded. She stalked Todd everywhere and even if he says ‘no,’ she hurt Nick physical and psychological with evil words and she’s a traitor, because she uses her own free will to tell Chancellor Raleigh to find Nick. That only made Todd angry and he threatens her ‘if Nick are hurt and die, then I will come back to kill you and your children can not save you.’ Only the grandmother saves the bitch from the dead and says the one thing that’s important is to save Nick and make sure he survives, “I will take care of this.” Even the grandmother have enough of her grandchild and she’s angry too, not because of Todd but of her grandchild that misuses her power as a free woman and hurts people. The grandmother loves Nick and really wish Todd and Nick the happiness and freedom.

The Chancellor Raleigh uses other sentries without conscience to hunt down and even kill innocent people to get to the Gifted ones. The Estate’s a prison now and many innocent people are already killed, because they have no use to him. Here you will meet a cousin to the kelbit a pyrahni = they feast on emotions and use some kind of telepathy using their own poison. This makes a hell to the one that tries to resistat the poison and it feel like the pyrahni are trying to choke/strangle you and find all the nightmares in your memory.

Nick’s in hell and knows not who can help him, he only wishes Todd’s going to save him and for every day he lost more hope that Todd will save him. Jah’lar the pyrahni are controlling Nick more and more, can Todd save him before it is to late? Nick only wants the poison and the happy memories of Todd and Nick together.

This is a fight to regain control of your body and mind, to know that your mate will always fight for you and never give up hope to have a “normal” life and freedom to choose to help people. That even if some people are evil, there always will be good people that fight and help each other for the right things, love, equality and freedom.

There as some surprises in this book, that I do not want to tell about because that will ruin the surprise and I want you to feel how Todd and Nick are fighting again to be together for the rest of their life.

Recommended to the ones that love supernatural made gay, out of comfort zone and the way that love always will win against evil and darkness. I love this series and I love Todd and Nick <3 <3 <3 Five Stars

On to the next book in the sentries series and hopefully a HEA to Todd and Nick, they can forget to find peace and safety in Elk Ridge after what that bitch have done 🙁

Thank you so much for your review of Chained Hearts, Helle. I had never seen this series before you made me aware of it. You’ve really made me want to read it now.

I also love that cover so much.

Thank you kazzak, I love reviewing books for you and happy that I make aware of the series 🙂
The series have really beautiful covers and I would have buy the art if I know where to find it 🙁

Like Kazza, I wasn’t aware of this series until I started reading your reviews. It looks like a great series.

Thanks so much for the review, Helle.

I LOVE the cover.

I think it’s official, we are keeping Helle …and we are nicking that cover

Thank you Kazzak and Cindi

I love the cover too

Thank you for such a great review! I’m honored. If you contact Dreamspinner customer service they might be able to help you get a copy of the art if you want a big sized print. I have my covers printed out but have to verify that I own the rights, so I’m not sure how someone else does that.

ps…I’ll pass your compliments onto the artist.

Kazzak and Cindi I am really happy to be stuck with you and I am happy that you want me to review books with you *happy dance* ;-D 😀 <3

Thank you so much for such a lovely review!