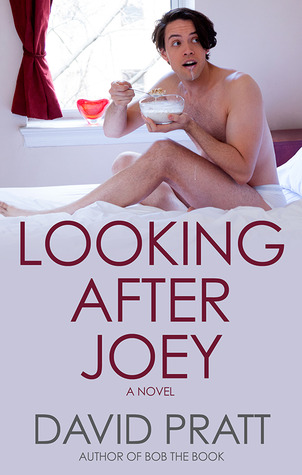 Now and then they ogled the first male calves of the season passing in the street, a season in which Calvin hoped he would finally find the calves with which he might spend the rest of his life.

Looking After Joey is about two friends, Calvin and Peachy, who live in Chelsea (Manhattan), are older, and reflect on being younger, things ‘relationship,’ fitting in, and what may or may not lie ahead. Calvin is nearly forty and a CPA. He is not feeling at all that shiny and special.  Peachy is slightly younger and an events planner who doesn’t voice his concerns like Calvin. He is more upbeat but has his moments whenever he stops long enough. Peachy rarely stops. They have been good friends for close to twenty years, each possesses a quality the other doesn’t and they look out for one another.

Joey is hard to explain. He knows nothing about real life. All he knows is stereotypical gay porn world – pizza boys always have the last delivery to your place, pool boys never have a costume and are always willing to skinny dip with you, tradesmen don’t have much in the way of actual tools, but they still have the right tool for the job…drilling and banging other guys. Oh yes, cops don’t arrest you, they do…other things to you. And last, but not least, guys in his world are ‘not gay, their girlfriends have just gone away for the weekend and they are having some fun.’ Every situation in Joey’s world is about sex and porn perfection – from toned, flawless bodies to their sizeable, uh, Rodd Packers, youth, and the sun that is always shining on nice houses, nice cars and their nice bodies. But what life in porn-world has in spades in pure fantasy, it is lacking in other areas, particularly relationships and the emotions and connections that life actually involves. That is not necessarily saying that real life is great. Real life can be quite confusing, and confronting. But, despite that, maybe because of that, it can also be nice.

Once Joey is out on this side, Peachy and Calvin see it as an opportunity 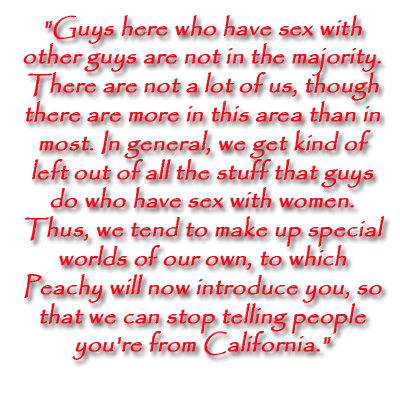 – Calvin to get back at sex toy and lube baron Fred Pflester for a grudge that Calvin is still holding onto, fifteen years on. For Peachy, it is right up his events alley to organise some social climbing. It would be fab for Peachy and Calvin to be a part of the beautiful people and the gayristocracy. It’s also added incentive that Fred seems to have some new boy (Jeffrey) up his sleeve who will have an unveiling at Fred’s Labor Day fete on Fire Island. No one knows who Jeffrey is and they simply must see. The quick-step manoeuvring that Peachy has to undertake to get them invited to not only Fred’s, but Bunce van den Troell’s beforehand, is something to behold. At times I ran out of  breath just reading.

While Peachy is calling in favours, Calvin finds himself a father figure to young Joey, teaching him about life and things necessary to be unafraid and independent this side of the screen. Joey Rhodes goes from porn star obsession and hunk to someone real and needing guidance for Calvin, and he takes up that need and role. In amongst the favours, Peachy takes it upon himself to school Joey in all things fabulously gay for the soirees – from Sondheim to Stravinsky, to musical theatre and Isherwood, not to mention gay royalty like Judy and Liza, and twentieth century Hollywood icons. Not an easy task –

“He’s at my place so much because Bunce’s little fete is in a week and we have to cram.
He said this thing just two days ago about Liza Minelli being Joan Crawford’s daughter. Even Doug fell off his chair. He corrected himself, but can you imagine if he said that in front of Bunce’s crowd? We’d be off every guest list in town before you could say ‘Metro-Goldwyn-Mayer.'”

“He’s really coming over to check out Doug and Joey. It’s like World War II. If Desmond thinks you’re hiding lads in the Annex, he breaks in.”

Stuart Bergman, a publisher who likes to say a hearty  ‘fuck you’ to whatever he feels is current. And Stuart’s a bit of a crass animal –

“Fuck you, diet.” said Stuart. “The diet schmeer is the end of civilization as we know it. When do I get to blow the limey?”
“Stuart, it used to be I couldn’t take you anywhere. Now, I can’t take you to the sidewalk outside of anywhere.”

There is an interesting and amusing look at religion

Cabaret, obviously the movie with Liza Minelli… and Nazi confusion

That the race doesn’t always go to the swiftest. Opportunities don’t always present themselves to the best candidate

That not everybody is cut out for, nor wants to be a part of, the gayristocracy

Calvin had imagined Doug as flawlessly beautiful. In fact he had an unruly mop of curls, a lopsided smile, a bit of a spare tire and a penchant for plaid. He was nonetheless adorable holding Joey’s hand…

I never knew cheese could make me laugh so much, and engineered lube and toys makes for hilarious reading

There is this funny book on the surface of Looking After Joey, but at a 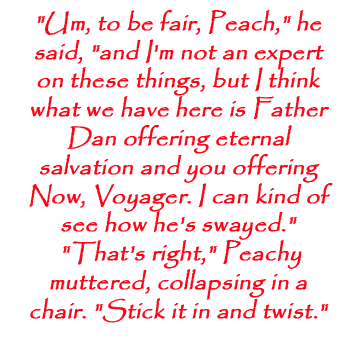 core level there is plenty of meaning. Life can be as complicated or as simple as you choose, it is not always fair. Aging scares some people more than death, and they will do anything to look youthful. Religion works for some, not for others – some true believers are good people, some are hateful. Sometimes, if we want people in our lives, we have to open the door for them to come through and let the chips fall where they may. Just because someone looks like they have it all doesn’t mean that they do. Just because someone doesn’t fit the mould of today’s standards of ‘attractive’ doesn’t mean they aren’t. People can appear one way, but be another – don’t judge a book by its plaid cover. And, as an aside, I will not be washing anyone’s feet very soon, I’m not that (metaphorically or literally) humble…or keen enough.

Looking After Joey is a very well written, witty, clever, laser-sharp, OTT look at being gay, and of being human. It is also very relatable. Most of us have self-doubts and not all of us can be classified as ‘cool,’ or exciting, often for no tangible reason, simply perception and preconceived notions. Plenty are looking for love. And so many are wanting to understand how to get into Club Cool, or say and do the right thing –

He was no “fun.” He had actually liked Beckett Shorts, Peachy should be educating him, not Joey.

I am older and I loved the movies, the references, I could also debate the merits or likes of one theatrical production over another. I had fun with it all. Maybe that helped my enjoyment level, but I am not American and I am not a gay man, so there is that, too. I found the book to be genuinely  laugh out loud funny –  I sat in the oncology ward at the local hospital and I did, indeed, laugh out loud as I read. Place that in context and it gives you an idea of just how funny “Joey” truly is. If you are looking for something   intelligent that will also make you laugh, feel connected, slap you across the face sometimes, because Looking After Joey can be very non-PC, God bless its clever writing – oh, to have David Pratt’s mind – then this is calves of doom good reading. 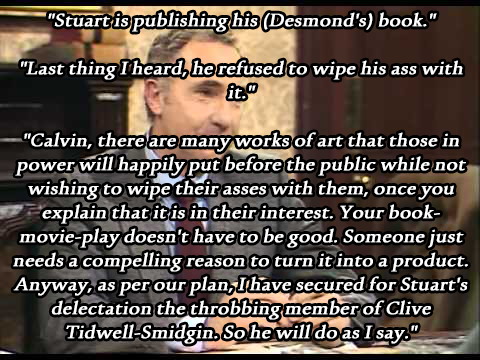 This is a “Cindi” book if I’ve ever seen one. I love a book that will have me laughing. The cast of characters looks like a blast and I can tell I’d love the story.

Yes, for sure, it is definitely a Cindi book because you like well written humour.

I hereby love your use of Sir Humphrey with that quote. Great review.

Ah, ‘Yes, (Prime) Minister.’ You are a person of true taste, John.
Thank you