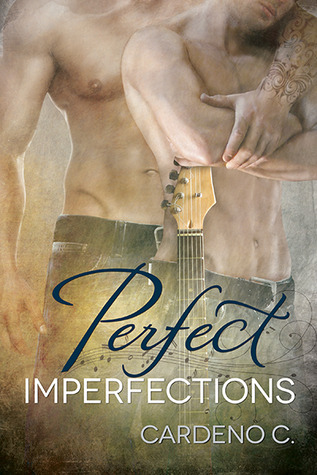 Hollywood royalty Jeremy Jameson has lived a sheltered life with music as his sole focus and only friend. Before embarking on yet another international concert tour, he wanders into a bar in what he considers the middle of nowhere and meets a man who wins him over with his friendly smile and easy-going nature. Accountant slash bartender slash adventure-seeker Reg Moore has fun talking and drinking with The Jeremy Jameson and can’t say no when the supposedly straight rock star makes him a once in a lifetime offer: keep him company on his tour by playing the part of his boyfriend.

Listening to music, traveling the world, and jumping off cliffs is fun. Falling in love is even better. But to stay with Jeremy after the stage lights dim, Reg will need to help him realize there’s nothing pretend about their relationship.

The official burb gives a pretty clear outline of Perfect Imperfections. Jeremy Jameson is Hollywood and rock royalty. When he sneaks off on his own one night for some private down-time, he meets a nice, easy going guy tending bar at a small town pub. A guy who doesn’t seem at all star struck in his presence. More than this, he seems incredibly genuine and has the ability to make Jeremy feel calm. Jeremy ends up staying for six hours at the pub and he and Reggie talk for a lot of that time. Because Jeremy has had a few to drink, Reg makes sure he stays at his place the night. Jeremy soon discovers that Reg loves adventure and he wants to travel, he just doesn’t have the funds to be able to do it. As it happens, Jeremy is about to head off on a world-wide tour and he would like someone to accompany him, no strings attached…except, well, Reg is perfect to be his “pretend boyfriend.”

“You should come with me,” Jeremy joked. “I’ll tell everyone I stopped dating starlets, and you’re my new arm candy.”

Reg feels that Jeremy has had a few and when he wakes up in the morning the offer will be rescinded. But it isn’t. Reg is offered the same pay he is on now, only with first class travel and being part of a tour thrown in. What starts out as Reg being Jeremy’s pretend boyfriend, keeping him company on the tour and organising adventures in different cities between gigs, ends up as more. Before long, Jeremy finds that Reg is not only good company but he has the ability to calm him down and help him cope more. That he enables him to deal with other distractions in his life – like interviews that are more frequent than usual, and at the worst possible times, and the paparazzi that seem to know every single movement he makes on this particular tour.

This is a nice book, a character and romance driven story that has no dramas or miscommunications. It is driven very much by the development of the relationship between Reg and Jeremy. That Reg may initially see this as travel and an adventure, but soon finds a lot to like about Jeremy. That Reg is gay and that he believes Jeremy is at least bi, if not gay himself, but he will take his time and see where it goes without scaring him. That Jeremy has never thought highly about the act of sex before with women but he has this increasing friendship-cum-relationship with a man who sees him as more than a celebrity. Who he begins to see as more than just a friend. That there is a basis for the relationship that develops between the two men to beyond ‘pretend boyfriend.’

I want to add this, I actually thought Perfect Imperfections was about a gay muso who didn’t want to be ‘out.’  It isn’t. I know it is fiction, and I get that, but I am really not big on GFY/OFY, I rarely read them. Mostly it’s because I feel they play into the hands of people who believe that being gay is a lifestyle choice. But Cardeno C went to great pains to work with this in a manner that made me comfortable reading the book. When Jeremy tells his manager, Bill, that Reg is to be his new love interest, Bill doesn’t like it much. He’ll spin it for his client, but he also shares his feelings about it being used as a ploy –

Not to mention several other points that were very well handled and respectful. I totally bought the fact that Jeremy fell for Reg and nothing felt forced or awkward.

My only niggles with Perfect Imperfections are that Jeremy reads younger than his age (thirty one turning thirty two) and that Reg says ‘cool’ and ‘awesome’ far too often for my liking. Hence the 4 stars. 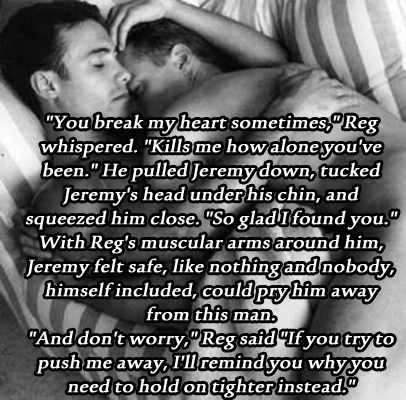 couple. They didn’t shine individually for me, but together they worked very well, but, really, that was the idea. It was also the time taken by Cardeno C to work out their relationship – this book is over a period of a year – Jeremy’s realisations, and the slow burn to them being together, that were particularly well written. Recommended for those who like rock star or celebrity stories, an OFY storyline and a sexy, sweet gay romance with its fair share of ‘aww, isn’t that sweet moments.’

This book was supplied by the author in return for an honest review.

I’m going to say first that the quote you used from the book had me saying “Aww…” and that made me interested in the story as a whole (you know how I read your quotes before the review… lol) Like you, I’m not a fan of GFY story lines for the same reasons you aren’t. However, I can see where this one might work for me with it being a slow-build over a period of a year, instead of “Bam! I’m falling for a guy when I never have before.” I know you get what I’m saying. Great review of… Read more »

Yes, the quote is lovely and indicative of the sweet nature and writing of the book. The relationship worked well and Cardeno C really did it justice. Reg is so much like someone very dear to me which made this review hard to write.

The cover is very nice and reflects the story..