If you have never read a Cardeno C book and thought you might like to, but weren’t sure about the writing or what to expect, or if you thought ‘argh, they’re part of a series, I can’t,’ here is your chance to get a good idea of the writing. I’m not much of a series reader but sometimes I see a blurb and I think ‘that sounds like me,’ but I’m not sure as I get all uptight about reading them in order (if I do read one). I’ve discovered with Cardeno C’s series that they are written as standalones within the series so you can read whichever book you fancy.

The following is not a review but an excerpt from Strong Enough. If you click here it will take you to ‘Mary’s’ review of the book as well.

On May 8th Strong Enough will be at a special price of 0.99cents at Dreamspinner Press. The buy link is below the excerpt. 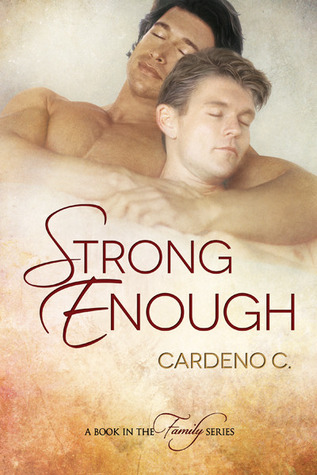 Spencer heard the voice behind him and was torn between following the demand or running the remaining few steps to his Accord . Ignoring the person calling out to him would be socially awkward. Not that he was a top authority on social graces, but he was pretty sure running away would be considered rude. So Spencer stopped, took a deep breath, and slowly turned around, keeping his briefcase against his chest.

Of course, he had no idea what kind of protection some leather and paper could offer, or even why he needed protection. Other than the first day he’d seen the handsome man, he hadn’t been caught staring. Plus, they were in a public parking lot, in broad daylight. He was safe.

Now that he was face-to-face with the big man, or actually face to neck, Spencer realized he had been wrong in thinking Emilio was as attractive in person as he had been through the window. No, as it turned out, up close and personal the man was even more stunning. The first time he had walked by the construction site and locked eyes with the stranger, Spencer had turned away within seconds. But this time, the broad chest was right in front of him, the sweat-damp T-shirt stretched over muscles Spencer wanted desperately to touch, and as close as they were standing to each other, the scent of sawdust and musk born of hard work permeated his nose. And that quickly, Spencer felt his cock filling.

Not since he’d been a teenager had he experienced spontaneous erections. And in recent years, he had often found them hard to achieve or maintain even when he was naked in bed with a man. Orgasms, whether alone or with someone, were so infrequent that Spencer couldn’t remember the last time he’d had one. He had chalked it up to age, to stress at work, to some bad relationships in his past, to the fact that he hadn’t ever had a particularly high sex drive. But none of those factors were stopping him now.

Just a few seconds next to this man and Spencer was already achingly hard. Then he gulped and looked up into chocolate-brown eyes and shuddered as his balls drew up and his dick pushed against his zipper. It was as close to cumming as he’d been since an unusually active night with his ex over a year prior. Spencer would have been terrified—should have been terrified—that the man in front of him would notice his erection, but it felt so good to want again, to experience that pull in his groin, he couldn’t bring himself to feel anything but relief as he lowered his arm so his briefcase covered his bulge.

“We’ve been doing work close to your office, so I’ve seen you around,” Emilio said, making Spencer realize he had been staring, but not talking. Then the stranger held his hand out and added, “I’ve wanted to meet you.”

“Oh!” Spencer looked down at the offered palm and then back up at the handsome face. He switched his case from his right hand to his left, making sure to keep it in place, shielding his groin. Then he took the man’s hand and shook it. “I’m Spencer,” he said, proud that his voice shook only a tad. “Spencer Derdinger.”

“I was right,” Emilio said, sounding quieter, huskier. Spencer waited for clarification about that statement, but it didn’t come. Instead Emilio held his gaze and his hand.

“Right about what?” Spencer finally asked, his curiosity getting the better of him.

“That you sound as great as you look.”

Not knowing what to say or how to respond, Spencer started blinking rapidly and stammering. “I don’t… I… what?”

“What are you doing for dinner tonight?” Emilio asked before Spencer had finished processing the earlier comment.

Feeling completely flummoxed, he didn’t know what to say. He looked at his wristwatch instinctively, then back at the man standing in front of him and said, “It’s only three thirty.”

The contrast between Emilio’s shiny white teeth and his deep tan skin and five o’clock shadow made his smile all the more powerful.

“Start the weekend…. Wait, what are we talking about?” Spencer asked.

“Well, right now we’re talking about hanging out for a little while and then getting dinner together.” Emilio hadn’t moved his gaze from Spencer’s face for even a second. He didn’t remember ever having someone look at him so intently. It made his legs quake. “But I’m hoping I’ll be able to talk you into stretching things out longer. At least until after breakfast.”

“Breakfast?” Spencer repeated, hating that he couldn’t seem to put together a sentence. He was a numbers guy. Words weren’t his specialty and neither were people, so he didn’t expect to be charming or a brilliant orator, but a complete sentence would have been nice. Of course, before his mouth could work, his brain would need to catch up to the situation at hand.

“Yes.” Emilio raised his free hand and covered the back of Spencer’s with it, making him realize they were still holding on from that handshake. “I make a mean omelet,” he said as he moved his fingers over Spencer’s skin with barely there touches. “Do you have jalapenos?”

“No.” Spencer shook his head and then wondered why he had answered the question. The entire conversation made no sense. “But—”

“That’s okay. We can always pick some up later. I’ll come by now and check your fridge to see what else we’ll need.”

Truly, the entire conversation was confusing to the point where Spencer wondered if he was dreaming. He half expected a frog to ride by on a flying bicycle at any moment. He could think of only one possible explanation that would lend some logic to the situation, but it seemed very unlikely. No way was this man looking to hook up with him.

At the risk of getting punched, or worse, Spencer steeled his courage and said, “Uh, Emilio.” He swallowed hard and took a deep breath. “Are you, uh, coming on to me?”

As soon as he said the words, he realized how ridiculous they sounded. Emilio was all cut muscles, chiseled features, and perfect hair. Someone who looked like that wouldn’t have given Spencer a second glance ten years ago, when they would have been closer to the same age. To think it was happening now, when he was softer, grayer, and more lined, was positively preposterous.

But then, contrary to any expectation Spencer had for the response to his question or, for that matter, the entire conversation, Emilio lifted their joined hands to his mouth and gently kissed Spencer’s palm. Spencer was pretty sure nobody had done that to him, ever, and it made his heart flutter.

“Yeah, I am,” Emilio said. “But if you have to ask, I must not be doing a very good job of it.” Emilio grinned as he spoke and his eyes sparkled. “I’ll see what I can do to be more clear once we get to your place.”

The corners of Spencer’s lips tilted up in response. How could he not smile with this man looking at him like that?

“Oh, holy shit!” Emilio gasped as he let go of Spencer and pressed his own hand against his chest. “You have dimples.” He sighed loudly. “I think I’m in love.”

Spencer’s jaw dropped and all the color drained from his face. “What?”

Without bothering to answer his question, Emilio pointed at Spencer’s Honda and asked, “Is this your car?” Spencer nodded. “I’ll follow you to your place, okay?” Emilio didn’t wait for an answer, just dipped his face down, planted a kiss on Spencer’s cheek, and jogged back to his truck.

It was the single most perplexing exchange of Spencer’s life. He wasn’t sure what had just happened, what he was supposed to do now, or what was going to happen. With his entire body trembling, he decided to perform simple, familiar tasks: walk, open his car door, put the key in the ignition, and pull out of the parking lot.

He drove home on autopilot, his brain still in that parking lot processing his interaction with the handsome younger man who had looked at him in a completely unfamiliar way. Then he glanced at his rearview mirror and saw the big white truck following him. It was terrifying, like having a freight train barreling straight at him.

No, that was a bad analogy. With a freight train he’d know what to do—jump out of the way as fast and as far as possible. But this was a gorgeous man with an unexpectedly gentle touch. So, contrary to any logic he should have been smart enough to have or self-preservation instincts he was old enough to have developed, Spencer didn’t drive to the nearest police station or a friend’s house or a public place. Instead, with his heart slamming against his ribcage, his breath coming out at an unusually fast clip, and his dick still hard as steel, he continued to drive straight home.

I have been interested in this one since I read the review of it on here. It looks like a great story.

I read the next one along and really enjoyed it.
🙂