Cardeno C Adult Excerpt, Wake Me Up Inside (Mates Series)

If you have never read a Cardeno C book and thought you might like to, but weren’t sure about the writing or what to expect, or if you thought ‘argh, they’re part of a series, I can’t,’ here is your chance to get a good idea of the writing. I’m not much of a series reader but sometimes I see a blurb and I think ‘that sounds like me,’ but I’m not sure as I get all uptight about reading them in order (if I do read one). I’ve discovered with Cardeno C’s series that they are written as standalones within the series so you can read whichever book you fancy.

The following is not a review but an adult excerpt from Strong Enough. If you click here it will take you to ‘Kazza’s review of another Cardeno C Book, In Another Life, as well for a look at something different.

On May 8th Wake Me Up Inside will be at a special price of $0.99 cents at Dreamspinner Press. The buy link is below the excerpt. 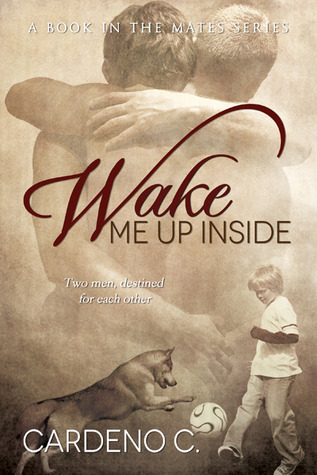 Wake Me Up Inside (Mates Series)

Jonah was reeling. What would Zev have done if Jonah hadn’t essentially dragged his ass out of the closet? Would he have ever realized he was gay? Jonah was truly starting to wonder whether his friend lived in a bubble. Maybe “cult” wasn’t as outrageous a description of Zev’s church, or whatever it was, as Jonah previously thought.

“It doesn’t have to hurt, Zev. In fact, I’m pretty sure it feels good. Guys enjoy it. At least, I think I’d enjoy it.”

The disbelieving expression on Zev’s face made Jonah laugh. He was actually explaining the ins and outs of sex to a six and a half foot, two-hundred-twenty-pound man as if he were a pubescent teenager. The whole thing was kind of endearing. He looked at Zev tenderly and kissed his way across that strong jaw. Letting his tongue lead the way, Jonah traced a path down Zev’s neck and over to his ear, where he took a few moments to suck on the lobe.

Zev pushed his hands under Jonah’s shirt and massaged his back.

The idea hadn’t even crossed Zev’s mind. Zev’s every sexual fantasy involved Jonah, so he hadn’t ever wanted to watch other men. Plus, he didn’t have a computer in the tiny trailer he was now calling home. It was an improvement over the tent, especially since he’d dug a well and put in a septic tank, but it was still pretty rudimentary. Zev spent very little on the trailer so he could keep saving to build a house Jonah would want to call home.

After nuzzling Jonah’s neck, Zev moved one hand from Jonah’s chest to the back of his friend’s head and drew the blond into a kiss. He gnawed on Jonah’s lip, sucking it into his mouth, and licking it. Jonah gave as good as he got, and it wasn’t long before he was straddling Zev’s lap, pushing his hard dick against Zev’s stomach, and sucking Zev’s tongue into his hot mouth.

When the men finally separated in search of air, Jonah rested his forehead against Zev’s shoulder and continued their conversation.

“I wanna show you, Zev.” He reluctantly moved off Zev’s lap and pulled him off the couch. “Come on.”

Zev followed Jonah to the desk and stood behind him, massaging his shoulders as Jonah clicked a few buttons on the keyboard. It didn’t take long for the screen to be filled by a view of two naked men in a bed. One was on his hands and knees and the other was behind him, pressing first fingers and then a hard dick into his waiting ass. The blissful expression on both men’s faces and the happy moans that streamed from their mouths seemed to prove Jonah’s point.

“See. It feels good.” Jonah’s husky voice was accompanied by a motion from his rear end against Zev’s crotch. Zev was leaning over his shoulder, staring at the screen. “Damn, Zev, from the feel of things back there, I think you might be interested. Wanna try it?”

Jonah’s hands went to the sides of his track pants and he hooked his thumbs in his pants and briefs together, pushing both of them down to his knees. Jonah felt a large, warm hand moved over the globes of his ass reverently, and Zev’s mouth took purchase of Jonah’s neck, sucking and nibbling.

Zev moved his hand to the button of his pants and managed to get them down. His briefs were next, and then his cock was free to rub against Jonah’s ass.

“Lotion.” Jonah gasped. “I have lotion in the right drawer.” Jonah scrambled to the side, pulled open the drawer, and found the bottle of lotion he used to beat off when he was alone, watching his favorite videos on the computer. Then he flipped the cap and pulled Zev’s hand in front of him, squeezing some of the liquid onto it. “Coat your dick with it. Do whatever you want to me, Zev. I want it. Want you.”

And with those words, Jonah stopped talking. He bent over the desk, rested his face on the surface, raised his ass in the air, and reached back, spreading his cheeks.

Zev moved his finger up and down Jonah’s cleft and soon replaced the finger with his cock. Once the hard member was settled between Jonah’s cheeks, the two men moved together, back and forth. It wasn’t the penetration Jonah had been seeking, but just having Zev pay attention to that part of his body was enough to spin Jonah into overdrive. He met Zev’s thrusts and moaned his pleasure. When Zev’s hand reached around him and started stroking his cock, Jonah shouted and came all over his desk.

“Jonah! Oh, Jonah.” Zev bucked against his firm body, groaned and shuddered, coating Jonah’s lower back with his seed and biting into the muscle where Jonah’s neck met his shoulder.

Although he’d previously licked and nibbled on that part of Jonah’s body, Zev had never truly bitten him. Even at that moment, he hadn’t let his wolf canines out or broken the skin, but this bite was definitely harder than any other he’d bestowed on his mate. Before he could worry about whether he was hurting Jonah with the firm grip his teeth had on the other man’s neck, Jonah cried out his name, and Zev felt the dick he was still holding come back to life and climax once again.

With his muscles too spent to hold himself up, Jonah’s knees buckled and he collapsed. Zev put one arm around his mate’s shoulders and the other under his knees. Then he lifted Jonah in his arms and made his way to the bed. His motions were slow and awkward since his pants were still pushed down around his ankles, but once he reached the bed, he yanked off his clothes, undressed Jonah, then wrapped the other man in a tight embrace.

“What the hell was that, Zev?” Jonah asked as he burrowed against Zev, trying to get warm and curb the shivers that had taken over his body. “I’ve never come that hard in my life. Or twice that quickly. Damn, I never thought I was into pain, but when you bit me, my entire body felt like it was on fire. A good fire.”

“It’s not the pain.” Zev stopped himself before he said anything else and blew his secret. He wanted to tell Jonah everything. Wanted to explain shifting, mates, and the claiming bite. That’s what had aroused Jonah, a bite so very close to the one Zev would one day use to permanently mark his mate and let the world know Jonah was taken. Based on Jonah’s reaction, Zev knew his mate’s body was ready for that step, but it couldn’t happen until they finally tied together.

Oh God, did Zev want to explain tying. He’d been wondering how tying would work with a male mate and now he knew. And if his mate’s words earlier that evening were any indication, Jonah was very much up for it. Well, Jonah was up for sex. The human didn’t know about tying.

But there was no way for Zev to tie with Jonah and then let him go. It was already hard enough to live apart from his mate. The distance between them went against every one of Zev’s instincts. He had to regularly remind himself that he had to let Jonah follow his dreams and couldn’t drag his mate back to Etzgadol and force the man to stay by his side.

Once they were tied together, Zev knew his wolf wouldn’t allow Jonah to leave. Hell, Zev wasn’t at all convinced his human could remain civilized enough to allow the distance between them after he tied with his mate. So there was no other choice. Tying would have to wait until Jonah graduated from college and moved back home.

This looks like a nice story and a nice start to a series.

This is my kind of excerpt. 😉 You needed some pix, Kazza. Pix. I’m just sayin.

I thought I should behave, Jay, lol.