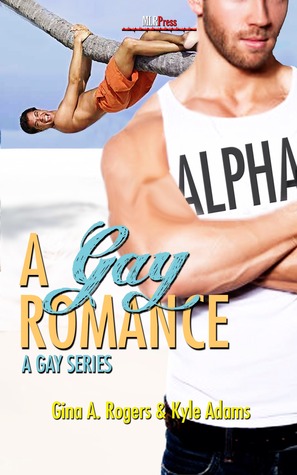 Before I get into to my review I need to stress something. A Gay Romance is not meant to be taken seriously. It’s a parody and it covers every single gay stereotype (and others) you can imagine. It’s in no way politically correct. It is meant to be taken in fun. Keep that in mind before reading it and if you get offended (or have no sense of humor) give it a pass.

Ram Rage is an alpha cop who loves his applesauce.

Ram Rage, alpha cop and all around badass, was not to be fucked with under any circumstances.

The story starts out after a ‘major’ crime had been committed (hehe!) and Ram is looking for the culprit – a dirty, rotten cop!

Rage would solve this case, he always did, and those snake-bastards would regret the day they slithered out of their moms’ vaginas. 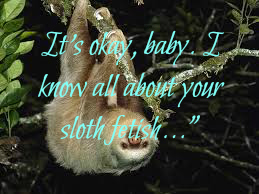 This sets the stage for the reader to see exactly the type of person Ram (who prays to Rambo) is. He’s big, he’s bad, and he’s a growly badass. Along the way (of Ram solving the horrible crime) the reader is introduced to a unique cast of characters, Ram’s partner Blake being one of them. Blake is a huge man. He looks alpha and masculine and (like Ram) total badass – on the outside. The minute he spoke I fell in love with Blake. Oh my gawd! He’s the ultimate ‘gay’ character. Who doesn’t love a guy who cries over bad hair and horrible organizational skills?

Blake was like a giant rainbow mascot for gay men. Everywhere they went the man pumped people up and made them act stupid.

“Rammy, out of everything we’ve seen today, and we’ve seen a lot, this is the absolute worst! It’s downright chilling.” Blake’s shudder went from his head to his toes.

Ram watched as Blake stepped further into the closet and began stroking the fixtures, talking gently. “If you were mine, sweet closet, I’d hang the most lavish clothes in you and color coordinate my ties on your racks.”

Blake sounded like he was on the verge of tears. “Ah! Wire hangers, Rammy. Wire! What kind of gay would have wire hangers?”

Ram and Blake work for the Homosapia Police Department, where all employees are gay. There’s even Andrea, the ultimate lady, who loves writing fanfiction involving some not-gay-in-real-life characters. I want to see Andrea’s story. She’s hilarious.

“Boy, I know you’re as hopeless as Jacob trying to win Bella’s heart from Edward. Not that she deserved either, that cheating whore. Which is why I rewrote the story. Let’s just say Jacob and Edward didn’t miss the skank. They were too busy fucking like bunnies,” she paused and looked more thoughtful, “or more like immortal and very energetic bunnies. Although I guess maybe Jacob would just eat–“ 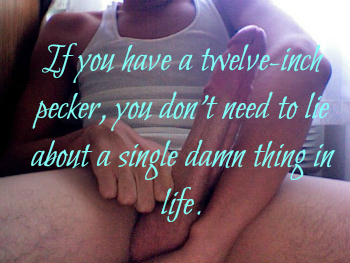 Once the ‘bad’ crime (the story opens up with) is solved, there is a murder and Ram and Blake are rushing out to solve it. The murder took place in the *gasp!* velvet section of a fabric store, Sew What. The victim was the coworker and best friend of Kory Pleyes, who called the crime in to the police.

Let me tell you about Kory. Kory is perfect. No, really. He’s the most gorgeous and perfect man (gay or straight) on the planet and everyone wants him. Even Siri (on his phone) is in love with Kory.  He reminded me of characters I’ve met in other specific gay romance books. You know the ones where there is one person who is so perfect and everybody loves? I won’t name names (I am so not that girl) but you know what books I’m referring to. Reading about Kory had me thinking back to some of those books, which made me giggle even more than the story already had.

To meet Kory Pleyes is to instantly fall in love. Literally.

Warm brown eyes were the first thing he noticed when he looked up at the Good Samaritan. He smiled and opened his mouth to thank the man but was cut off when the stranger suddenly blurted, “I think I love you.”

“Um, thanks for catching me,” Kory said.

“I want to catch you forever. Come home with me,” the man pleaded.

“You’re so nice and completely not creepy but I’ve got to get to work.”

Kory started working at Sew What when he was forced to leave his home in Wereville. In Wereville, Kory wasn’t considered perfect, he was considered odd. If you knew about Wereville, you’d be thinking of all places to be considered odd? Seriously? Anyway, Kory was hired by Adrian with two A’s and they became the best of friends. They both share a secret, though this secret is not revealed until long into the story (though I question anyone who didn’t actually figure it out almost immediately, especially considering that Kyle Adams co-wrote this). 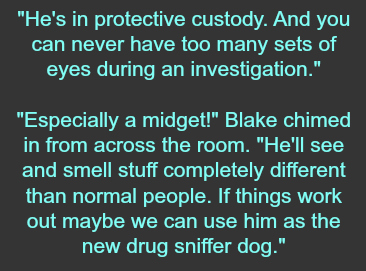 Ram and Blake show up at Sew What to investigate the murder of Kory’s friend, Kimber. For the first time in Homosapia, someone wasn’t falling at Kory’s feet (so to speak). Ram is a growly alpha beast who only wants to investigate the death of Kory’s friend and to keep getting his applesauce. Kory wants Ram but Ram is not to be distracted by some pretty boy who makes his um, muscle, twitch. Kory is the prime suspect in the murder but it doesn’t take long before Mr. Alpha Ram Rage rules him out and decides (in his alpha-ness) that Kory is his and his alone. When more people start dying and there is an attempt on perfect Kory’s life (right in the police department!) Ram makes it his mission to protect his man and find the killer. They, along with Blake and Adrian with two A’s, embark on a journey to do just that.

Adrian is a little person, though I’m not sure what term is politically correct these days. But then again, this book is so not politically correct so it doesn’t matter. He is a fiesty little guy and he and Blake clash immediately. The reader knows it’s only sexual tension between the huge cop and the little man, but they have yet to get that particular memo.

“Discount on black velvet. Twenty percent off if you don’t step on Kimber and fifty if you pause to say your respects.”

The language in this book is so out there and so damn funny I couldn’t stop cracking up. It’s like every bad romance novel and every bad chick flick rolled into one. The descriptions for certain parts of the male anatomy had me literally laughing out loud.

There is a kidnapping, more interesting characters introduced and lots and lots of very hot sex between Kory and Ram Rage. The mystery of the murders is solved eventually and Kory and Ram are allowed to go on to have their perfect happily-ever-after in perfect Homosapia with their perfect friends. I am loving the fact that this is book one in a series because I can’t wait to see more of Kory and Ram and I must see Blake and Adrian with two A’s get their story.

There is so much about this book that I absolutely loved. I love a good satirical story (or a parody in this case) and this is that in spades. I’ve read other reviews where some didn’t quite get the humor but I got it all and laughed from the first page all the way until the end. All the characters – from Kory and Ram to every secondary – were hilarious.  It has been a long time since I laughed so hard, and so much, while reading a book.

Highly entertaining. Very sexy. Absolutely hilarious. I can’t recommend A Gay Romance enough. I can’t wait to read the second in the series. If you read this, make a point in reading the header at the beginning of each chapter. You won’t be sorry.

This book was provided by the authors in exchange for a fair and honest review.

Previous post
Missed Connections: I Swear to You, Sloan Parker
Next post
Cardeno C Adult Excerpt, Wake Me Up Inside (Mates Series)

This sounds like a lot of fun. My favorite part of this review was when my eyes were assaulted with twelve inches of goodness. 🙂

That’s my favorite part of the review too.

The book was a blast. I finished it yesterday and I’m still giggling.

That’d be right, Devon. Crossed eyes and all
😛

Great review, Cindi, but I see no “No more wire hangers” memes anywhere!!!! Pfffttt, what were you thinking?

I love the 12 inches of goodness as well. Was there anymore after that??

There was almost a “No wire hangers!” meme but I stopped myself. I could have filled this one up with GIFS and memes but my review was already long enough. Gotta love the 12 inches of goodness. I got to channel Kazza K while I was doing my ‘research’.

I really loved this book. I laughed from the very first page to the last one. Definitely a new one added to my favorites list.