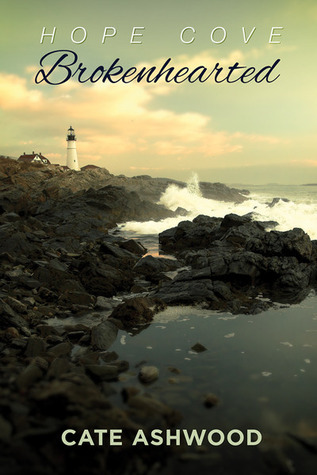 Nothing like this had ever been easy for Oliver, He wasn’t used to the simplicity of just being with someone. He wondered if he should let go of his misgivings and go with it.

Oliver Parrish is twenty five and a sous chef who likes cooking and lives in a small apartment in Seattle. He likes being behind the scenes as he isn’t really a people person. He grew up in the foster system and it hasn’t left him with hugely warm and fuzzy memories of people. His life is fine and he doesn’t wish for too much –

All he wanted was a restaurant to run, a hot guy to pick up every once in a while to scratch the itch…

Owen Macklin is the Sheriff of Hope Cove, Maine, but he has flown across the country to Seattle to let Oliver Parrish know that he had a half sister. A half sister who has recently drowned. Maggie was adopted by a local nurse when her mother, Oliver’s mother, didn’t want her, wasn’t capable of looking after her. Before Maggie died she was keen on knowing more about her biological mother and in so doing she discovered that she had a brother and she had planned on meeting him. Oliver didn’t know any of this until Mack shows up at his apartment. Maggie has left behind an apartment and bakery that is now Olivers. Mack feels Oliver should come and get a feel for Maggie and her life. The community she lived in and loved all her twenty eight years, Hope Cove. Mack and Maggie were best friends from fourth grade until they day she died, and while he wasn’t keen on this trip, and even Oliver as such, he wants to do what is right by Maggie and her wishes.

Oliver thinks about it all and decides that he will go and check out Hope Cove. See something about his sister and where she lived. He doesn’t know how to feel as a lot of his life has been avoiding feelings and not letting people in. This is the basic premise behind Brokenhearted, along with the fact that Mack and Oliver develop feelings for one another. Oliver isn’t sure at first, he thinks Mack is gorgeous but straight – but he leans closer at times than he should, seems to flirt just a little. Is he straight, or maybe bi? Could the gorgeous whiskey-eyed sheriff like him?

There is not a lot going on in Brokenhearted other than a lovely romance between characters I liked. Mack is as good a character as you will find anywhere – he is kind, caring, strong, loyal, patient, understanding and just plain nice and uncomplicated. Oliver is unsure, anxious, a bit guarded,  shy and his character was mostly a nice guy who just wasn’t socially aware.

The other aspect that was nice to read was the short diary entries that allowed Oliver to get a sense of his sister and how they had some similarities. Although Maggie was a social person, and Oliver isn’t, they both liked cooking. That Oliver is in the restaurant business and Maggie owned a bakery was something that was a commonality, along with their biological mother. And as fate would have it, Mack likes to eat.

Mack had only been with women before but he had no difficulties with feelings for Oliver and being intimate with him. There was no great dramas or fuss about the gender fluidity of his character. Oliver was surprised Mack was gay and that maybe it was because Maggie and Oliver looked alike in some ways. That Mack was having these feelings for him for the wrong reasons. Maybe the other shoe would drop and Mack would wake up and realise he was mixed up about Maggie and Oliver. Mack isn’t ‘out’ at work because he has never needed to be, and while he isn’t going to jump on in and tell everybody he doesn’t worry about it like Oliver does. Oliver worries that he is an interloper in Maggie’s life and that he doesn’t deserve the things that Maggie obviously wanted him to have – her apartment her bakery. He feels Mack should have them –

“You obviously loved her very much, and I can’t take this from you.”

“Oliver, I got to have her for twenty-five years. You’re not trespassing or taking over anything.”

There were a few minor niggles – if someone dies and there is no will, I don’t see how the estate goes to a half sibling you didn’t know. Maybe it is different in America. I also found the swearing jarring, particularly given Mack’s character. That is a funny thing for me to say as you can throw a lot of swearing at me – and there certainly isn’t tonnes of it here – but it just seemed off-kilter for the characters.

There is no antagonist in Brokenhearted. There is no major angst or drama. There are some nice secondary characters, like Haydn who is out and proud, and Declan, one of Mack’s colleagues. Not to mention eleven year old budding scientist, Jeremy.  There is something that surfaces to do with Maggie and in turn that affects Oliver, which causes a bit of momentary drama. I can understand why Oliver acts as he does because of it. Oliver comes to his senses. Mack is so patient. Gee, I liked Mack  –

Recommended for lovers of nice characters, a homely-sense-of-community town, a brother discovering his sister, and himself,  a character who is dead having a lovely voice. Also for those who like a romantic and sweet book that has a nice build and some good but not too overpowering sexual encounters.  This is book one in the Hope Cove series and I will definitely be coming back for the next book in the series as it is too nice to miss out on.

He had the urge to cover up or run, but he fought it. He let Mack look, let his eyes wander over every contour, every mark and every scar. He struggled against the wave of insecurity for a few seconds longer, until Mack exhaled. “You’re so beautiful. I’ve never seen anything so beautiful.”

Book supplied to me by the publisher in return for an honest review.

This looks like a really nice story – one that I could tell by reading your review that I would really enjoy. In regards to your comment about U.S. law and the estate going to a half-sibling – I’ve actually seen this happen with someone who my family knew years ago so it is possible. I don’t know much about those types of laws but I have seen it happen. Dying without a will here is a nightmare for family members. Everything has to go through probate, etc. and it can take years. I’ve added this book to my list.… Read more »

Yes, that is what happens here as well – probate. It takes a VERY long time to get through it all. Oliver just ‘inherits’ his unknown half sister’s things without a will. It didn’t seem correct to me. Anyway, the book is very nice.