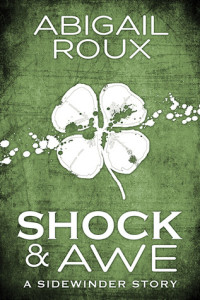 If you have not read the Cut & Run series by Abigail Roux then my review will be spoilerish to you. If you have, then no big deal. If you haven’t and plan to, you might want to skip this review. I am not giving away spoilers for this particular story but I am in regards to the back stories of the two main characters, Nick O’Flaherty and Kelly Abbott (Nick in particular).  Also, if you haven’t read the others, my review may not make sense as I am not describing the Sidewinders in detail. Keep that in mind before reading.

Nick O’Flaherty. I have hated his character since Divide & Conquer, the 4th in the Cut & Run series. (My Goodreads review for that one can be found here.) I hated him in that book and my lack of love did not change with the three books that came later. Nothing could make me like this guy. He did everything in his power to instill doubts in Ty about his relationship with Zane and come on!  If you’ve read the series you don’t want anyone fucking up that relationship as they (Ty and Zane) do a good enough job of that themselves. Granted, Nick is Ty’s best friend in the world but remember – he tried to fuck up Ty and Zane’s relationship!  Yeah, yeah. I can hear some of you now saying “But Nick more than made up for that later”. Okay, so yes he did in a sense but I still hated him. I liked hating him, damn it!

As much as I love the Cut & Run series and I pre-order each book in advance, I admit to not being that enthused over the release of Shock & Awe for the above reasons. The only thing that had me purchasing the book today was knowing there was a chance of seeing Ty and Zane again before their next book is released.

Now to the story –

Shock & Awe picks up almost immediately after the 7th book in Cut & Run, Touch & Geaux (my review can be found here).  Told in two parts, a before and after if you will, there’s Shock & Awe and another short, Bait & Switch. Kelly Abbott had been injured in New Orleans while saving Nick’s life. There is never any doubt when Kelly got out of the hospital of who was going to take care of him during his recovery. Nick was going to take care of him as that’s what he and the other Sidewinders do – they look out for each other. They are a group of best friends who have been a part of each other’s lives for years.

In Kelly’s remote cabin in Colorado, the story of Nick and Kelly picks up almost immediately. Nick had confessed to the others a year prior that he was bisexual (the reader was already aware of this because of his thing for Ty). Suddenly with the two men alone together in the cabin, Kelly is interested. No, he’s more than interested. He wants Nick to kiss him – to show him – how it is to be with another man. After a bit of hesitancy on Nick’s part, there is a kiss and then as the days go on, more. Nick doesn’t do relationships. He doesn’t do commitment. But Kelly is one of his best friends in the world and that one kiss feels more natural than anything he’s ever had with anyone, male or female.

The two go back and forth with Nick trying to hold off on caring too much. Kelly is known to fall hard so it is only a matter of time before he does start caring too much. As soon as a decision is made for the two to start working on some type of relationship, Nick and the other Sidewinders are given orders to be deployed, only not Kelly. One, Kelly is still recovering from being shot. Two, there is another reason why it would not be happening even if Kelly was well. I won’t give that away. So Nick and Kelly are forced to separate before they can explore what they have.

I really can’t say more than that without giving the story away. Ty and Zane make a couple of appearances, as we knew they would. God, I love those guys and I got a little teary in one place. The others (Owen and Digger) are there as well and I am hoping we’ll see their stories unfold one day too.

This is a gay-for-you story with Kelly. Or maybe it’s an out-for-you situation. A couple of Kelly’s thoughts have me believing the latter might be the case.

Even now the thought sent a pang through his chest that made his wound throb and ache. He placed his hand over it.

The sex (as always with Abigail Roux) is unbelievably hot. I found myself rooting for these guys from the very beginning and I ended the story thinking maybe Nick wasn’t so bad after all.  I have a very long memory with characters so I doubt I’ll ever love him completely but now I can say I no longer hate him. Kelly, I adore, and I have since the very first time he was introduced many books back.

Overall, a really good short. I loved revisiting with these guys and any time I get a chance to catch a glimpse of Ty and Zane I am happy. I look forward to seeing where the author is taking the Sidewinder series and I will continue to count down the days until the next Cut & Run book is released.

Hmm, I think I am one of the few reading in the genre who has never read the Cut & Run series. This sounds good for followers of Ty and Zane and the secondary? characters. Nice review, stealthy – you gave just enough without spoiling anything, Cindi 😀

It really is a good one for followers of Ty and Zane. We’re already familiar with the MC’s because of the Cut & Run series. This just continued their story without focusing strictly on Ty and Zane this time. Thankfully they (Ty and Zane) did make a couple of appearances though. I enjoyed it.

Awesome review Cindi. Like Kazza said…you gave just enough without spoiling anything. I was looking forward to this book not just for my Ty & Zane fix but I also wanted to see where things went with Nick & Kelly. I hated Nick just like you in Divide & Conquer but he redeemed himself in the later books for me.

I LOL reading this line…”you don’t want anyone fucking up that relationship as they (Ty and Zane) do a good enough job of that themselves.”

I just reread that line and am a bit surprised I put that in the review to be honest. But you and I both know it’s true about Ty and Zane. 😀

Thanks, K.M. I was hesitant to read this book but I knew I would because of Ty and Zane and because I really liked Kelly. Nothing will make me love Nick but my opinion got a little better after reading this. It was a really good story and made me eager for more. I can’t wait to see where she takes the other guys.