About The Love Song of Sawyer Bell 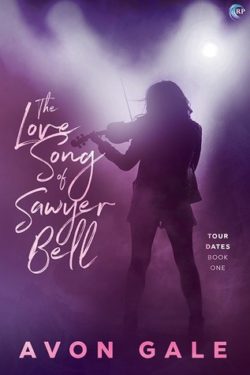 Victoria “Vix” Vincent has only two weeks to find a replacement fiddle player for her band’s summer tour. When classically trained violinist Sawyer Bell shows up for an audition, Vix is thrilled. Sawyer is talented, gorgeous, funny, and excited about playing indie rock instead of Beethoven. Their friendship soon blossoms into romance, even though Vix tries to remember that Sawyer’s presence is only temporary.

Sawyer’s parents think she’s spending the summer months touring Europe with a chamber ensemble. But Sawyer is in dire need of a break from the competitiveness of Juilliard, and desperately wants to rediscover her love of music. Going on tour with her secret high school crush is just an added bonus. Especially when Vix kisses her one night after a show, and they discover that the stage isn’t the only place they have chemistry.

But the tour won’t last forever, and as the summer winds down, Sawyer has to make a tough decision about her future—and what it means to follow her heart.

To celebrate this release, one lucky winner will receive a signed paperback copy of The Love Song of Sawyer Bell! Leave a comment with your contact info to enter the contest. Entries close at midnight, Eastern time, on September 30, 2017. Contest is NOT restricted to U.S. entries. Thanks for following the tour, and don’t forget to leave your contact info!

Love Avon’s hockey books, would love to read this one. bellabarratt (at) yahoo.ca