Whoa, Life Comes At You Fast!

So, if you’re following along on this blog tour, you might notice these original posts getting a little shorter as time goes on. No, it’s not because I’m bored—I’m incredibly grateful to have so many awesome blogs hosting me. And it’s not because I’m uninspired—there’s always something interesting to say. It’s actually because the amount of time I was going to devote to doing these blog posts got cut down by a LOT, and at this point it’s better to give my hosts something rather than nothing. And actually, that thought turned into a decent segue for a post, which I’m going to explore now.

Life is full of unexpected twists and turns. Very cliché, I know, but it’s so freaking true. You’ve surely felt it at some point, the steady chugging of your everyday life suddenly turning into SMASH!BAM!WHOOSH! as a random event interrupts your plans. Maybe something changes at work, or at school. Maybe you have to travel unexpectedly, or lost someone you’d anticipated holding onto for years yet. Maybe it’s good news, like it is in my case—I’m going to be a mom three weeks earlier than expected, not because of anything really dire, just a precaution on my doctor’s part. But…three weeks early. I had stuff to do in those three weeks. I had blog posts to write! I was going to be eloquent and brilliant and share all sorts of insights and-and-and—

Ha! Tough cookies, my little snickerdoodle. Hence pounding these posts out hard and fast (which is not quite how I hope my labor goes, ow). It’s kind of weirdly fitting, though, because one of the main characters in Off The Beaten Path finds his regular life turned utterly upside down by the sudden realization that his three-year old daughter is a werewolf, and because of that, not safe in general society. She’s taken away, and he has to hunt her down and beg, bribe, or threaten his way into the pack trusted with her caretaking. That’s no simple thing, since werewolf packs are very deliberately isolated and guarded by the government. But my guy won’t let that stop him. He’s committed to his child and lets his life change utterly to be with her.

It’s an attitude I hope to emulate in the very near future ???? 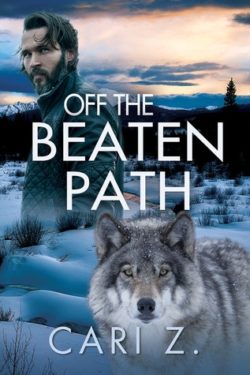 Cari Z was a bookworm as a child and remains one to this day. In an effort to combat her antisocial reading behavior, she did all sorts of crazy things, from competitive gymnastics to alligator wresting (who even knew that was legal!) to finally joining the Peace Corps, which promptly sent her and her husband to the wilds of West Africa, stuck them in a hut, and said, “See ya!” She also started writing then because what else are you going to do for entertainment with no electricity? She writes award-winning LGBTQ fiction featuring aliens, supervillains, soothsayers, and even normal people sometimes. You can contact Cari at carizabeth@hotmail.com. In fact, please do. She’d love to hear from you.