The Body in the Backyard by Hollis Shiloh 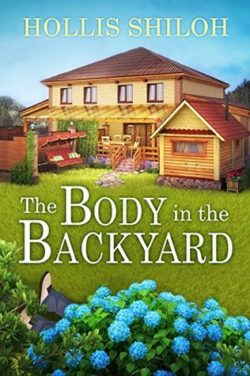 Clarence Collin is pushing up daisies—in Abe’s bed of zinnias!

When the caustic critic of a TV gardening show winds up murdered in Abe’s well-groomed backyard, both Abe and his hunky-but-irritating neighbor Gregory might be on the suspect list.

Abe starts amateur sleuthing in self-defense…and to spend time with Gregory. When the two green thumbs look into their neighborhood’s dirty little secrets, who knows what they’ll dig up?

I had no idea what a “cozy gay mystery” was before, but I guess I do now after reading this book. It has a cosy vibe, it’s a mystery and it’s… well, it’s kind of camp and delightful.

From Abe to Zinnia, this fictional suburban neighbourhood is full of houseproud residents who are all alliterations. There’s the attractive and widowed Winnie Winters who seems to be having fun with local lothario and gardening hunk Rick Radford.

Rick Radford was a gardener who worked regularly in the neighborhood, mowing and landscaping. He had a reputation for fertilizing quite a few ladies, as well. Whatever role the apocryphal milkman had once held, local gossip said that Rick now filled.

The older gardening doyenne, and baker extraordinaire, Mary Mink has an adoring fan in Fiona Fairchild – she of the solid character and strong hands. There’s Hannibal Hughes, the head of the gardening club, Lorraine and Larry Lockwood, who don’t approve of Abe’s ‘sort’, and Henrietta Heaton and her blackberry wine. Then there’s next door neighbour Gregory Gallop, that most dreaded of gardeners in a garden-proud residential neighbourhood – a permaculture devotee.

All of them are about to take part in a local garden competition run by their garden club. They are rather excited when Clarence Collin, a local man made good, agrees to be the judge. Clarence, of the white teeth and perfect hair, has just been given his own gardening TV show, and the blurb has its alliteration right for Clarence – he’s as caustic as Drano. Not one nice word for anyone in the club, reducing many to sadness and a realisation they aren’t getting any younger. If there is a single doubt in one of the competitor’s minds, Caustic Clarence seems to dredge it up and snap a dream… or five..

But Clarence is not long for this world. He’s found dead, smack-dab in the middle of one of poor Abe’s zinnia beds. Abe calls the police but he needs a bit of extra fortifying, and even though he isn’t sure about all that muddy permaculture business, Gregory Gallop is his neighbour and he’s awfully easy on the eye. He might be straight but Winnie can’t have all the local men, that just isn’t fair.

After the police do their initial investigating Abe is worried he may be a suspect. After all, it is his zinnias Clarence met his untimely demise in. It can’t look good, what with Clarence being extra mean in his critique about Abe’s garden. Abe loves a good murder/mystery, Midsomer Murders and Wallander included. He decides he might do a bit of digging now he’s gotten over his initial concerns about his herbaceous hippie neighbour and feels somewhat bolstered in Gregory’s company. So the lonely Abe realises there is more to Gregory than he allowed himself to believe. Over one of Abe’s culinary creations they decide they might do a bit of amateur investigating to see if someone else had reasons to bump off Clarence.

Abe looked at him helplessly. He hadn’t volunteered to cook, had he? He’d simply meant… Gregory’s eyes sparkled at him with delighted intent. He really was unwholesomely good-looking, for a garden nut. Sighing, Abe resigned himself to the inevitable.

There are rumours about most people in the neighbourhood. Abe is one of the newer residents, he moved from the city to the burbs after his ex, Lenard, cheated and left Abe lonely and quite hurt. His best friend now is Winnie, but there have been rumours she might have aided her wealthy deceased husband into his grave. Abe refuses to believe that though. Gregory is the latest in town and all Abe really knows is that Gregory likes to rip up lawn and grow productive plants, and he’s eco-minded in general. What started out as Abe and Gregory not knowing much about each other, Abe feeling Gregory was a bit mucky and macho, leads to them becoming good friends over Gregory’s growing and supplying the produce for Abe to cook. But it’s a shock to Abe that Gregory is actually bi – there is a god after all!

The book is solely from Abe’s POV. At first I thought Abe was going to be a bit bitter and judgemental but as he opens up, as he thinks about his neighbours, you see he’s a kind man who feels a little old, a little lonely, a lot lost and worse for wear from the breakdown of his marriage. He’s also delightfully camp at times and I loved him more for that. He’s the one who knows or notices little details about other people – looks, behaviour, desires, needs, clothes. He’s the one the neighbours often talk to. Through his kind and blessedly everyday eyes the reader sees that there are reasons plenty of people might have to have pulled the curtain down on Caustic Clarence. It doesn’t just stop in the burbs. Ollie, an old friend of Abe’s from the city, knows of reasons other people around Clarence in showbiz might have an axe to grind.

For those who need to know, there is no sex in this book, but there is a blooming relationship, pun intended. The book is not perfect, it gets a little rush-rush in the last chapter, some details can be repeated, but Abe is charming, Gregory calm and helpful. The secondary characters are all so based in reality and interesting while purposely being a tad larger than life. The murder/mystery is good, just when you think you might have a bead on the killer things shift and make you rethink your ideas. The story remains upbeat throughout while making you feel at a deeper level. I’m an older reader, I lament some of the activities I find harder to do at this age, so I could relate. No ages are given but the MCs would have to be at least in their late 40’s, probably 50’s, and the rest older, and that made it refreshing. I’m a mad-keen gardener, so that appealed, and I do enjoy some burbs-related behaviour and humour. For the joy, the fun of it all, for the cosy gay mystery – 5 Stars!

This looks so good. I’m not sure I’d heard of a cozy gay mystery either but I know I’m wanting to read Body in the Backyard. 🙂 Not all books need sex to be entertaining. Some do, but not all. I know I’d be all over this one. Great review.

It really was a terrific read, and I found it while I was cruising around Amazon.

I agree, no sex is needed when there are other things going on – a murder/mystery, for example. I loved all the people’s names as alliterations, it just added that extra dimension too. Clever.

I think you’d like it, but don’t breathe near the plants, okay? LOL