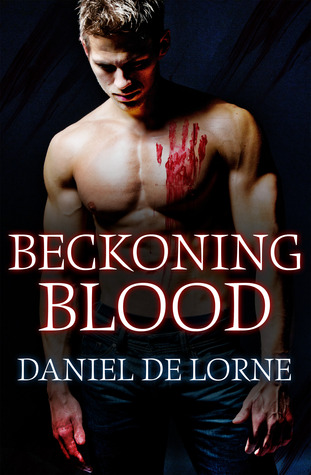 Thierry and Olivier d’Arjou are twins living in 1390, Carcassonne, France. They work at the local abattoir. Their family consists of Henri, their nasty, abusive father, and Aurelia, their younger sister – although she assumes a maternal role. Olivier feels she is closer to Thierry, and Olivier resents anyone being close to Thierry that isn’t him. The twins have a bond, one where they feel one another and each other’s moods and whereabouts intensely. Olivier uses it to sense where Thierry is as much as he can. One fateful night leads him into the woods outside the city where Thierry and the town’s apothecary, Etienne de Balthas, meet up to tryst in secret. After  Olivier has finished spying on his twin and brooding on it, he is mistaken by a vampire (Rellius) for Thierry – who the vampire has been watching for several weeks. Irrespective, Rellius turns Olivier. Olivier cannot be immortal without his brother so he sets about manipulating events to ensure Thierry is also a vampire. Nothing is altruistic for Olivier. 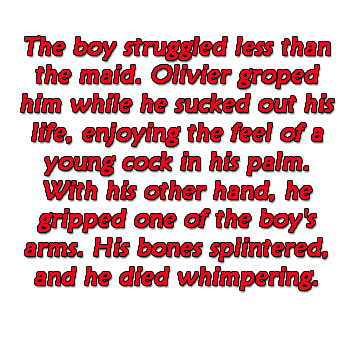 twin. He is dominant, sadistic, opportunistic, unfeeling and, quite frankly, a sociopath. All with immortal power. Thierry loves Etienne but this is a problem for Olivier who makes sure to take care of it. Thierry initially refuses to believe his brother could be capable of events that occur, but he is consumed by blood lust and his turning so he is somewhat distracted.

Before they leave Carcassonne they decide to go home and say their goodbyes. Olivier’s idea of goodbye and Thierry’s don’t exactly match up. However, Aurelia intervenes – it seems their younger sister has some  power of her own that no one knew about.

From 1390’s France, Beckoning Blood jumps to 1792 Saxony. Olivier and Thierry are still undead and together. They are now, however, Orlando and Tomas. Olivier is continuing to play games and using people for what he considers their worth – their fear and their blood. And he is also very much possessive, obsessive and jealous over Thierry. Olivier can be with anyone but who he really yearns to be with is Thierry. Thierry will not be with Olivier and is not inclined to be with anyone, except to feed and have sex as needed.  There hasn’t been anyone for him since Etienne, and four hundred years later he still mourns his loss. Unless he is with Olivier there is always fear of repercussions and brutality. This soon becomes problematic when they are invited to Baroness Liesel’s castle for some fun, games and the hunt. Once again, Olivier’s idea of fun, games and the hunt are not the same as everyone else’s.

In Saxony three important things occur – Aurelia appears to them again, she has 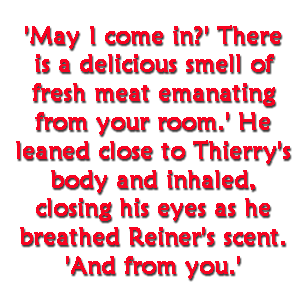 popped in and out of their lives on a couple of occasions over the centuries, Olivier sees some major sport to be had with a Duke and his son, Wolf, and Thierry falls for someone. Reiner. Reiner is handsome, interested and Thierry believes he has found the reincarnation of Etienne – it’s in the eyes – and Aurelia does not discourage that train of thought, that a soul can be reincarnated again through the ages. Interestingly, Reiner can heal, Etienne was an apothecary, so….They become lovers and now Thierry’s fear kicks in (justifiably) that Olivier will work out that he is with Reiner and brutally dispatch his ‘opposition.’ Events occur and games are played in Saxony. But I shall leave it here and move on.

The book fast forwards to modern day Perth, Australia. The twins are now in excess of six hundred years of age. They have spent some time apart after Saxony, as Thierry is angry at 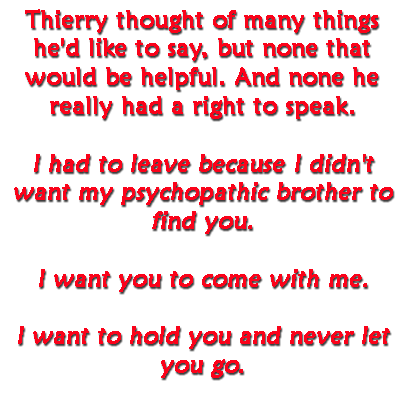 Olivier, but that time is off page. Now they are back together. Instead of castles and the hunt, there are nightclubs to grind away at and find your fuck and food. But life can become a tad boring, or meaningless, when you are immortal and your twin doesn’t love you as you would like, or your twin kills the people you fall in love with. Here, some more developments occur along the reincarnation theme – good and bad, with some extra mojo-kicker. Other characters are introduced and I am keen to see what happens with Oberon, as well as Alex. The book ends in a satisfactory manner but lots of questions arise, as is obviously meant to be the case. I’m assuming another book is planned and I wait patiently for that. I have been looking for a darker MM paranormal series for a while.

What I would have liked more of:

I would have liked more sex. It’s not always necessary, but here I needed raunchier. I wanted a bit more bite and I wanted it hotter, dirtier and nastier to suit the rest of the book. But that could say a lot more about me than the book.

World-building. I would like even more on the vampires and their world. Other vampires added. And more on Oberon, more on dear sister Aurelia – but I’m assuming the latter two will pop up in another book. I definitely wanted more on Thierry’s ability to read Olivier but keeping Olivier out of his mind. The bond is interesting and I wanted more exploration of that.

I have been waiting for a book and a (possible) series like this for a while and I enjoyed Beckoning Blood’s violence, vampires – they are brutal and they kill people – and I would now love to read more on the…protagonists(?) – I use that word in a loose fashion. This is a first time published author’s book and if this is anything to go by Daniel de Lorne has a very bright future as a writer ahead of him.

(vampire) paranormal reading, who like some blood and gore, some teasing-sibling- kink, games, a vampire with daddy issues, somewhat unsympathetic yet highly interesting characters who draw you in. And an edgy ambience. I am   hoping that Daniel de Lorne decides to run free with his characters. There is an incredible opportunity to take this somewhere very twisted. I’m interested to see where it goes. I do not buy into Thierry as a good guy. Part of me wants to but the other part, no. I know he is not as crazed as Olivier, but…he is no saint either. There is more to him. At times I felt he was the Louis to Olivier’s Lestat. Buckle up! This could be one interesting series if the author is planning on it being one. Oh yes, that is one hot cover.

As he lifted the drink to his lips, Olivier caught the sight of the tattoo on his left forearm: aut inveniam viam aut faciam.

I’ll either find a way or make one.

I added this to my TBR after reading your brief review on Goodreads. After reading this, I know I’ll be reading it as soon as it is released. I love a good dark story that doesn’t shy away from on-page violence. The characters all seem complex and interesting. The story sounds exactly like one I would be sucked into when I’m needing something outside of my norm. For it to be written by a first-time author, and for it to be written well, says a lot about the author’s talent. I can’t wait to read this. You know my love… Read more »

I think you would REALLY enjoy this, Cindi. You love a good spilling of blood in your stories. I love some edge and some enigmatic characters who are not as clear cut as one would think on the surface. I LOVE darker paranormal and vampires are my supe de jour, ha ha!
😀

Carcassonne holds a piece of me and I’m Aussie – had me at those two things. Throw in some vampires, and I was hooked. Daniel de Lorne is a very promising writer. I was very fortunate to read this as early as I did .

This sounds so good Kazza. When is it out?

It is good, Jana. Very good. I don’t know dates. May some time is all I know

Love good vampire stories and the fact that it’s m/m… well, that’s just icing on the cake! AND that it’s also set later in my home city of Perth, Western Australia, I’m hooked! Definitely will be reading this one!

Could not agree more with you, Kelsey. You have to love vampires. And these are some interesting vampires at that.

And Perth, bonus! Great to hear from fellow Aussies loving the genre.

Good review – must check it out.

Ha, Ha Cassie. Someone else is making *cough cough* jokes on here with me. It really is fangtastic. I think you’ll like it.

For those who wanted to know, it is up for pre-order at Amazon. Links now available above.

[…] “I have been waiting for a book and a (possible) series like this for a while and I enjoyed Beckoning Blood’s violence, vampires – they are brutal and they kill people – and I would now love to read more on the…protagonists(?) – I use that word in a loose fashion. This is a first time published author’s book and if this is anything to go by Daniel de Lorne has a very bright future as a writer ahead of him.” – 5 stars from On Top Down Under Book Reviews […]