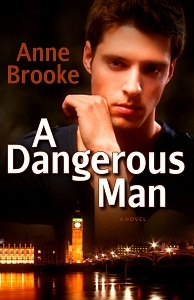 Purchase At:  ARe, Amber Allure, amazon

This book is incredibly dark. But it is real and beautifully written. It haunts you during and after.

I originally read A Dangerous Man in July 2012. It has recently been  re-released. It truly is an incredible piece of literary fiction. It is an LGBT book, because the main protagonists are gay men, but it is not what a lot of people classify a M/M book. It is not about romantic HEA’s and round-peg-in-round-hole writing. It is stark and real and an incredible piece of writing by an extremely good author. It took me a couple of days to centre after I read it. Basically put, here is a book that pieces together a very disturbed, traumatised mind. That shows you the effects of the physical on the psychological and vice versa. This is one of the most intense books I have ever read.  I feel as if the review is a debrief.

Michael is an aspiring young artist who sells himself for money to help him survive. But more importantly, to help him survive until he can reach his artistic dream of his own exhibition, and beyond. When we first meet Michael, he is living with a local gallery owner, Joe, and Joe’s partner, Paul. I have trouble typing Paul’s name as, to me, he is the most horrendously disgusting individual. Throughout this book Michael cleans up, picks up after everyone, it’s a means of control over his chaotic, seemingly powerless life. After one night, where Paul uses Michael sexually in lieu of rent money, Michael cleans –

Alone, I tidied up my cupboard-sized bedroom, resisting thoughts of what had happened that morning and the night before. It wasn’t hard; putting things away where I didn’t have to think of them again was something I was good at.

Again all was so clean it made me want to stay forever.

Jack needs some art work for his reinsurance company. He wants to contemporise their collection. Joe feels Michael may (or may not) be what the company is looking for. Jack meets Michael when Michael takes his portfolio in for viewing at the company. Michael then decides, after the original portfolio viewing, to chase Jack to get the commission. He wants the job, needs to prove he can do this. Plus, he is attracted to Jack.

The book is from Michael’s POV, which makes it far more powerful and allows the reader to see him struggle talking to people, coping with his life, and what most others consider to be everyday situations. How Michael views love and his ongoing and, most powerfully, deep seated issues of trust. His increasingly disturbed inner machinations.

A Dangerous Man tackles the subject of ones environment, abuse, obsession, and the bleak outlook marginalised people – particularly those with mental health issues – suffer in our society. The effects of childhood abuse is horrendous. This book may be fiction, but it is grounded in fact. I am very picky on the psychological aspects of a book. Frighteningly, I can’t fault this book.

I loved Michael, poor soul that he is, and I read this book with constant grief in my heart and tears in my eyes as I knew where he was going. As I felt his life come together yet unravel before me. To see Michael is to see attachment disorder or a personality disorder in motion. Not necessarily easy to like, but I was drawn to Michael and to his plight.

I also loved Jack. He was, at heart, a decent man in a relationship that could never go anywhere but down. Jack could never fully understand his lover’s perspective. It was mission impossible – emotionally, economically they’re poles apart. Michael loved the idea of comfort with Jack, whilst feeling physically ill because of it at the same time. Jack sees a beautiful and vulnerable young man, someone who needs him. Someone he wants to rescue but can never, ever help. Jack is vulnerable after the breakdown of a recent relationship and he isn’t into ‘the scene.’ Along comes this aesthetically pleasing, emotional, but edgy, young man, who chases Jack with such fervour. Unfortunately for all concerned, Michael is beyond broken, he is ruined – broken implies you can fix something, ruined is beyond repair.

This book is very, very dark. There is no happiness here. Given the way it started, the undertone, the direction, the characters, it would have been disrespectful to the book and the reader if it went in any other direction. So, having said its bleak, it’s also amazingly well written, and starkly, beautifully real. I cannot fault the characterizations, the setting, the technical aspects, or the psychology. The impact of the book comes from the depth of meaning and feeling the characters convey and the reader gets to feel – something that Anne Brooke conveys so powerfully. For example, Michael draws in charcoals and pencils and Joe keeps (ironically) telling him he needs to soften things, change style. But Michael can’t, he is incapable of seeing anything but blacks, greys, monochromatic tones to life – you know for Michael to see anything else will somehow lead to a frightening annihilation of his mind. His life is a series of light and dark moments, pure and simple. And even in the light Michael portrays darkness. If he sees in colour you fear it will all be too much. A dangerous man could well be set loose as all final emotional checks and balances become null and void. All the places are vivid – Hackney, Islington, Surrey, they are so strongly juxtaposed against one another to show you how Michael feels and behaves when he’s in these places – confused, sick, scared, out of control or resigned. Never comfortable.

I recommend this book to those who are interested in a well written book about fragile psychology, tenuous control, with real cause. It is an intense (LGBT) book where romance is not the all encompassing theme, rather an individual’s complexities are. It shows how easily tragedy can collide with everyday life…and that is a scary thing. A Dangerous Man is not an easy read, but it is an incredibly powerful and haunting book. One that I have never forgotten over a year since initially reading it.

An excellent review. It is certainly good to see the range of LGBT books reviewed.

Thanks, John. Not a comfortable read but it is excellent reading. Cheers!

Your review alone made me feel the emotions of the story. I can tell that the author wrote Michael’s story well, even if it was difficult to read. I will be adding this to my TBR shelf as it’s rare to find books written so realistically and I can tell this one was.

Outstanding review of a book that I have no doubt broke your heart to read.

Thanks, Cindi 🙂 In all sincerity, Anne Brooke is a wonderful author and she writes across several genres. I have never forgotten these characters, that says a lot right there.

Yes it does. It says a lot when an author can affect you long after you read the book.

Wow, that was pretty interesting. Inspiring, as nicely. Thanks for sharing these kinds of inspiring knowledge with us. Great site, congrats!