The Trouble With Elves (Heartwarming),Therese Woodson 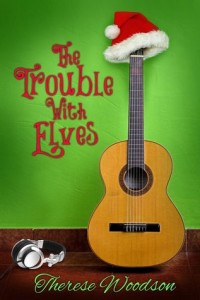 Cal Martin loathes Christmas music, especially the clichéd carols pumped through the mall speakers on endless loop. Even worse is the holiday-themed hell of Santa’s Village that looms right in front of the sports store he manages. It’s yet another hurdle for Cal as he tries to survive the world of retail during the soul-sucking holiday season… until he catches a glimpse of one of Santa’s elves and becomes infatuated with the cheery, gorgeous guy dressed in candy-cane tights.

Of course, just walking up to the guy and asking him out isn’t easy, and a botched attempt at matchmaking ends up turning a simple courtship into a mess for the gossip page. What can Cal do to overcome his social ineptitude, correct erroneous assumptions, and maybe have a merry little Christmas of his own?

This is one of the cutest stories I have read in a very long time.  I read Twelve Tasks by Therese Woodson not that long ago and was eager to read her new short. I was so not disappointed. First, check out the cover. It’s simple and understated but describes part of the story so accurately. Only when I added the cover to this review did I notice the big headphones – also in the story.

The blurb describes a lot so you know going in that Cal seriously hates Christmas music and all the decorations and craziness of the holidays. Unfortunately, he’s stuck dealing with all of it because the sporting goods store he manages in the mall is only a feet away from Santa’s Village where little kiddies sit on Santa’s lap all day long. The music is blaring constantly and he must look at the decorations during all of his working hours from before Thanksgiving until after Christmas. It’s a nightmare for someone like Cal.

Santa would sit there, take requests, and hand out sugar to spoiled hellions who would then run into Cal’s store and proceed to touch everything with their candy-sticky saliva-wet fingers.

There is only one bright spot and he discovers this the day Santa’s Village is open for business: One of Santa’s elves. The man is so gorgeous that Cal can’t take his eyes off of him and finds himself watching him as often as he can.

Eventually Cal and “Santa’s Elf” meet and unfortunately there is a very big misunderstanding and not one the reader would expect. It was comical in a sense but yet not. Poor Cal. He’s shy and awkward and only wants to get to know the hot elf but his crazy employee Mia manages to unknowingly mix things up a bit.

Cal was forced to give up his dream of being a professional baseball player after a career-ending injury.  He is drifting through life as a store manager until he can find out what it is he wants to do with his life. Only twenty-four, he feels washed up not just in his career of choice but in life as well. I am a huge professional baseball fan and I’ve watched many careers end publicly as Cal’s did so my heart broke a bit for him.

Then there is the elf and note that I am purposely not giving his name in this review and I hope that others keep it out of theirs as well. To do so would be giving a huge spoiler and I want future readers to discover what I did the way I did. It was a major surprise and definitely not something I was expecting.  It was so confusing but absolutely perfect. To say more than that would be too much.

The secondary characters are awesome. That’s the only word to describe them. From Cal’s hilarious brother Brock to Mia (Mia was a horrible employee. She knew it and she didn’t care, so his presence was a good thing if it meant she was actually paying attention to customers. Also, she was pretty fun), one of the worst employees in history. You can’t help but love her because she’s so damn funny and so confused.

Cal and Brock together will have you giggling at times with their interactions, like when they are about to visit their father and stepmother for Thanksgiving.

Cal and Brock stood shoulder to shoulder on the stoop in front of their dad’s house.

“So when Dad launches in about baseball,” Cal said, toeing at a misplaced brick on the sidewalk.

“I swoop in and remind him of my questionable choices regarding traffic violations.”

Cal nodded. “Good choice. Nothing gets him more riled than the fact that you don’t drive anymore.”

Brock nudged Cal with his shoulder. “And when Sandy starts talking about the neighbor’s sister’s daughter who is so sweet and nice….”

“I comment on the neighbor’s sister’s son’s ass and remind her that I’m gay.”

Brock held out a fist. “Fist bump of solidarity, bro.”

This story is so sweet. I adored the elf and just wanted to hug him a few times. Poor Cal. He wanted the elf so bad but kept bumbling up everything. When they finally get it together, it is a true “awww” moment.

Excellent short story. I can’t wait to read more by this author.

This short story was provided by Dreamspinner Press in exchange for a fair and honest review.

This sounds so nice. I loved that bit of dialogue between Cal and Brock. Perfect and funny 🙂 Great non-spoiling review, Cindi.

Thanks. I seriously loved this story and I will be so angry if I see reviews spoiling it. The brothers are hilarious together. 🙂

Reviews for The Trouble With Elves | therese writes things

[…] at On Top Down Under Book Reviews gave it 5 stars and said: “Excellent short story. I can’t wait to read more by this […]