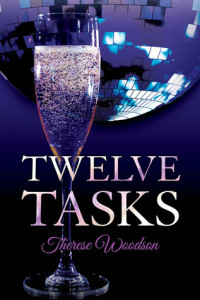 Eliot and his two friends are in a rut. Roommates and best friends for years, Eliot, Jen and Pete have settled into more of the same. Pete is a serial one-nighter, never seeming interested in anything more than hook ups with random girls. Jen hasn’t had a real date in forever. Eliot suffered a great loss three years prior and is having a difficult time moving on. The last date he had was around the time his entire world fell apart. He’s content with his job at the college library, doing his studies and watching the occasional Doctor Who marathon. The three have a great relationship but it’s fairly obvious that they are enabling each other and this prevents them from getting out and exploring new things. Eliot feels that changing things will take them backwards, not forward, but he goes along when Jen comes up with a crazy idea because he’s never been able to say no to her.

It’s New Year’s Eve and the roommates are having their annual party. Eliot is not much of a drinker but (as he does every year) he accepts the drinks thrust on him by Jen and Pete.

They were well aware of Eliot’s inability to function after more than one drink. They had witnessed his most embarrassing moments, which ranged from vomiting in a woman’s hat, to waking up in someone’s bathtub, and the ever memorable wearing of lipstick and eyeliner…….. the result was that Eliot had looked like a disturbing, bespectacled clown.

It’s moments before midnight and neither Jen nor Eliot have anyone to kiss with the ringing in of the new year. Best friends, they do a quick peck with each other and that’s that. The next morning Jen has had enough and she comes up with a plan. Her New Year’s resolution (that will also be Eliot’s) will be trying one new thing a month for the next year with hopes that the new experiences will help them both find more. Eliot, still more than a little tipsy from the night before, goes along with Jen’s plan though he really doesn’t want to. Pete refuses to be part of it (smart man) though he does have his own funny resolution.

“Eliot, the last time you had a date was two and a half years ago, right after your mum – “

“I know when my last date was, thank you.”

The first task is joining the gym where Pete works. Eliot is a klutz of epic proportions so joining a gym is not exactly on his list of things he must do in his lifetime. Dreading it with every fiber of his being, he agrees to meet Jen there the next day. The moment he walks in is a disaster. First, a jerk wearing an expensive suit bumps into him and almost knocks him down, without so much as an “excuse me” aimed in Eliot’s direction. Then his scarf gets stuck in the door and he almost falls on his butt. This later leads to being made fun of (supposedly behind his back) by the jerk who practically ran over him moments before. Here’s where we meet Matt Parker.

“You!” Eliot pointed. “You’re the jerk that knocked me into the door.”

Matt crossed his arms, the muscles flexing beneath his shirt, and looked Eliot over, amusement barely contained in the quirk of his lips.

“Do I know you?” he asked, tone dripping with condescension.

“And what type is that?”

“A muscle-bound jerk who likes to pick on the little guy to make himself feel better and to overcompensate for things that might be lacking,” Eliot answered hotly.

Matt chuckled. He smiled at Eliot, arrogant and gorgeous. “I bet you were pushed into a lot of lockers when you were in school. I bet you still have a little of that inferiority complex,” he said taking a step closer.

Matt Parker is a bastard who has zero social skills and this is evident from the moment he is introduced in the story. The entire time I’m thinking “Oh please don’t let this guy be the other main character”. But of course he was. Matt is a young, successful attorney. He went from being the popular jock in high school to being the attorney he is today. Accustomed to having people seek him out (for his money or popularity) he has never exactly learned how to interact well with others and to make new friends. He instantly gets on the wrong side of Eliot but Eliot is no shrinking violet. He gives as good as he gets. This begins an interesting story of Eliot and Matt.

Each month, there is a new task for Eliot and Jen. Jen has taken to the manager of the gym Carlos, who just happens to be one of Matt’s friends. With each task, somehow Matt, Carlos and their friend Joey always show up. Carlos, to try to get in Jen’s pants. Joey, because he’s a sweetheart. Matt, to try to get close to Eliot, though he totally goes about it the wrong way.

Eliot is bisexual and has not had a relationship in a very long time. The last one he had was with a woman who almost destroyed him. He knows he should hate Matt Parker (he definitely has reason to) but for some reason he is still drawn to him. Matt just wants to find a way to get close to Eliot, if not romantically then in friendship. His mouth prevents him from doing so though. He is constantly saying the wrong thing. He’s hateful and mean and compliments from Matt come out as insults.

“You’re not completely horrible at running. You look quite like a wounded bear instead of the clumsy duck you are.”

Each new task is entertaining for the reader. There’s karaoke, riding motorcycles, ballroom dancing and even getting a tattoo – among others. Eliot goes along with everyone because he secretly enjoys being pulled out of his comfort zone. Of course he’d never share that with Jen. He must continue to pretend to be put out by all of them. Each new task brings Eliot and Matt closer together as somehow Matt finds a way for he and his friends to be part of them all. He claims it’s to protect Eliot from his clumsy self but the reader is privy to the fact that Matt really just wants to get close to Eliot.

It’s much easier to be considered a jerk and to have people avoid him because of it than to try to relate to someone new.

… in the giddiness of the moment, Eliot thought that if Matt didn’t have the personality of a dick, they might get along and it might be… nice.

The secondary characters in Twelve Tasks are unbelievably entertaining. Jen is the typical, funny female friend and Pete? You honestly can not read this book and not fall head over heels in love with the guy. I found myself laughing out loud many times with some of the things he said. Carlos, Joey and the others are fun to read as well.

“And you want to suck his dick,” Pete added.

I have to say that I really despised Matt early on (as mentioned above). He immediately came across as a rich, arrogant bully who took great pleasure in knocking down those who were smaller than him. He tried doing it with Eliot but Eliot did not put up with it. He fought back, regardless of how big and bad Matt came across. Later, my opinion of Matt changed greatly. He was still an ass but he became a lovable one. Eliot, my heart broke for. He had been stuck in a rut for so long as a result of two devastating losses and he was afraid of moving on. Matt and his friends help him to do so later. It was nice watching him as he finally was able to let a few things go.

Overall, this is a nice story. There is quite a bit of humor and a sweet romance. My only problem with the book is that I felt that a couple of things dragged on a bit too long. I felt that there were so many details leading up to something but too few when they were necessary. The build-up was a bit slow for me and at times I found myself wondering when or if the author would finally get there. This didn’t take away from the story as it was all made up for in the end. Also, there is next to zero on-page sex in this book so don’t go into it expecting graphic details. There are a few sexual situations but none that are really described.

An entertaining read with a great cast of characters. If you can get beyond Matt’s early behavior, the rest of the book is fun.

Great review, Cindi. The book sounds a little different. I think I will try something new each month now 🙂

It was a bit different and I really liked that. I think we should both try something new each month. The funny thing is that most of these things I would so do (not the bungee jumping.. I draw the line at hanging by a rubber band). 😀

Good idea though. Maybe I’ll step out of my reading comfort zone once a month and try something new. It’s a thought.

[…] On Top Down Under Book Reviews gave my novel 4/5 stars and called it “An entertaining read with a great cast of characters.” […]