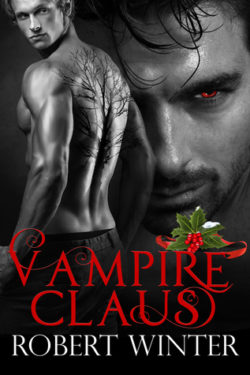 ’Twas the night before Christmas, but what’s stirring is a little more dangerous than a mouse.

Taviano is nearly two hundred years old and never wakes in the same place twice. Weary and jaded, the vampire still indulges in memories of childhood Christmases in Naples. He lingers in shadow, spying on mortals as they enjoy the holiday.

When Taviano spots a handsome young man in Boston loaded down with presents and about to be mugged, he can’t help but intervene. Soon he’s talking to joyous, naïve, strong-willed and funny Paul, a short-order cook who raised funds to buy Christmas presents for LGBTQ children. Before he knows what’s happened, Taviano is wrapped up in Paul’s arms and then in his scheme to get the presents delivered by Christmas morning.

A vampire turned into a Christmas elf… What could go wrong?

Vampire Claus is a 30,000-word standalone gay romance about a lonely vampire and a fearless mortal with no instinct for self-preservation. A heartwarming ending, no cliffhanger, and a young man who discovers he has a thing for fangs. Isn’t that what Christmas is all about?

These are my thoughts rather than my usual in depth review. This book and I didn’t hit of off for all the reasons I mention here. Plus some I’ve left off.

I love paranormal, it’s my favourite, and this sounded like a really interesting Christmas spin with a vampire – they’re my penultimate paranormal character. But I cannot see why there is so much love for this book on Goodreads. It’s like a gay quasi-Twilight – including running carrying the human love interest – with characters I just could not get into and dialogue that left me cringing. There is nothing new here either. If you bring me characters that pop and great writing, I’ll be fine with the vampire status quo. Sadly, nothing popped for the right reasons in Vampire Claus.

Taviano is one hundred and ninety years old, but twenty-two at his turning, and Paul, whom he jumps in and helps when he’s being mugged with gifts for local LGBTQ+ kids, is twenty-four.

My first issue is that I didn’t understand the attraction of either man, there is nothing to suggest chemistry, it’s insta-lust, which I can totally excuse in paranormal books, but it never developed into something more for me. However, that’s the least of what got on my last nerve. Taviano isn’t supposed to understand any modern terminology, it made me laugh because the guy’s been around through different decades and eras and changing language. He would have picked things up. Paul, however, makes up for Taviano’s loss with oodles of modern speak, talking like a twelve to fourteen-year old. There was no need for this heavy-handed juxtaposition of eras and characters by the author. The difference is handled perfectly in books like Vespers, where Thaddeus is an old vampire, and quite old fashioned, and Sara youthful and current.

“Awesome-sauce.” Paul blinked a few times and cleared his throat.

I buddy read this with someone more than half my age and they rolled their eyes at the language throughout. It seems it isn’t just me being older.

Anyway, when Taviano is on a rooftop he spies some guys stalking someone, threatening him. Does he think muggers? No. He thinks bandits. He could’ve learned another name by 2017.

He slipped away into the darkness and repeated his instructions to Mike and the other bandit he’d dealt with first.

Ah, but he did know muggers because pretty soon after he thinks this –

Taviano had to grin back. “You’re remarkably calm for someone who was mugged tonight and cut with a knife.”
“No, I got this, bruh.

And, of course, Paul still speaks like a pre-teen/teen, bruh!

After he’s mugged and Taviano mentions a potential for a scar, Paul is not perplexed or worried. No, badass dude is badass about it all-

“Put a bandage on it, keep it clean, and I suspect you won’t scar.”
Paul’s eyes widened and he smiled hugely. “I didn’t even think about a scar. That would be gangsta! A real war wound, right?”

And this is how Paul smells to Taviano. I don’t know, I’ve never thought like this about anyone’s scent. I guess I’m not a vampire, but in my reading this is a new one for me, and it’s really specific… and random.

His senses filtered out the mundane traces of life so he could savor the essence of the man beneath. Rosemary and lemons and the wind through a grove of olive trees.

But Taviano is nothing if not specific –

Taviano threw his head back and laughed. It had been sixty-seven years and nine months since he laughed like that.

And the prose occasionally switches to shades of purple. I do love some purple prose but it doesn’t work or fit within this book.

Paul still wouldn’t look at him so Taviano audaciously, unexpectedly, reached out to stroke his cheek. The slight stubble scritched as he curled his finger under Paul’s chin and tugged until their eyes met.

“You’re neat. Do people still say that?”
Paul buried his face against his chest again. “Not for, like, thirty years.

Come on! If Taviano learned “neat” in the 50’s/ 60’s he could have learned some more contemporary words for these last few decades.

And this analogy by Paul sat badly on me as I read. These gifts are for “kids.” This is tasteless, in my opinion. Guess I’m a prude –

Paul rolled his eyes. “I guess the ninja monastery didn’t have TV. Anyway, these kids were gonna get shafted come Christmas morning, like, by the biggest dick without lube.”
“That’s…painfully descriptive,” Taviano chuckled.
“Whatever. Prude,” Paul muttered with a grin as he tried to gather his bags of gifts.

The positives about the book? It’s easy to read. You can kick back and not think and just let the concept of the story wash over you – it’s happy and festive.

In the end, I felt a huge disconnect from the dialogue and the characters of Vampire Claus but plenty of people seem to love this one. So check out the other glowing reviews, and you can always try a sample on Amazon and see for yourself.

“Everyone’s awake now. Do you want to knock on the door so they can thank you?” When Paul shook his head, he asked again, “Are you certain?”
“Hundo-p,” Paul exclaimed as he straightened and tried to get himself under control. “That means I’m one hundred percent sure.”

And, on that note, I rest my review.

Actually, that smell description is pretty par for the course. I have a post in progress that literally just lists all different ways I’ve seen character scents described (shhhhh don’t tell anyone since I haven’t posted yet), and this isn’t even the weirdest scent I’ve got on the list, but I am absolutely adding it lol.

Anyway, I was thinking of reading this one cuz I like a paranormal Christmas read or two this time of year, but I’m already cringing at the stereotypical-frat-boy-sounding dialogue :-/ Not for me. Great review, bruh.

You must have some doozy scents on your soon-to-be post. I have to read this post. I think it was the added “wind through a grove of olive trees” that got me on this one, combined with the memory of his last laugh. Taviano seemed so precise 🙂

Yes, I read it because I like a paranormal Christmas themed book too, and vampires, but this one left me cold. Others are enjoying it. I did see your TBR for this one and thought it might not be your cup of tea so I’m glad you read my review.

I’ve been seeing this book all over the place. I love the cover but I can tell the book wouldn’t work for me. The first time I see awesome sauce or bruh in a book I’m out. Maybe I’m just old. 🙂 I seriously had to read the ‘kids were gonna get shafted’ quote twice. Uh, no.

Great, honest review, Kazza. Not every book is going to work for us. I think I’ll pass on this one.

The cover is really, really good but it truly does not reflect the style of the writing. Awesome sauce and I’m out. Amazeballs too, that was also in the dialogue. Oh yes… that analogy should never have been used and I’m quite surprised people have not arced up about it.