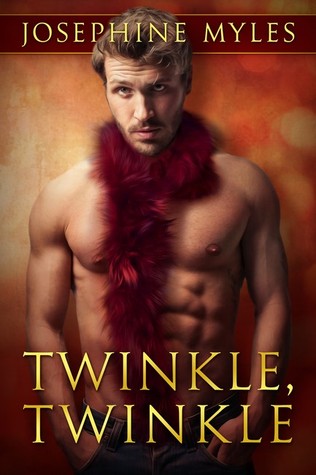 It’s Christmas Eve, and down in Accident and Emergency Dr. Tom Berriman really hasn’t got into the festive spirit. Newly returned to his home town, he’s missing the big city he left behind and can’t get enthusiastic about a holiday he’ll be spending on his own. That is until he catches sight of the attractive electrician fixing the lights—who promptly crashes down out of the ceiling and becomes Tom’s patient. Tom can’t believe his luck…until he realises he knows the man already.

Electrician Vince has changed out of all recognition since they were at school together, where Vince was the butt of all the bullies’ jibes—and worse—while nursing a hopeless crush on Tom.

If the newly-hunky Vince can forgive his former tormentor, and Tom can get over his lingering guilt, maybe their Christmases won’t be quite so lonely after all.

This review is for the second edition of Twinkle, Twinkle, published in November of 2015.

Tom Berriman has just returned to his hometown. A doctor, he takes a position at the local hospital. He’s not out of the closet at home, so he’s not exactly gone out of his way to hook up with anyone since he returned. He dreads Christmas because he pictures himself in an empty house with a frozen dinner. How sad is that? Things change when he’s at the hospital and he spots the sexy lower half of an electrician that was hired to install Christmas lights. I say ‘lower half’ because the other man is on a ladder and the rest of his body is in the ceiling running wires. With a sigh, Tom walks away from the lobby and is forcing himself to get back to work when he’s interrupted by a loud bang and sparks flying. Rushing back into the other room, he hurriedly checks the electrician, who got a bad shock (literally) and fell off the ladder. When Tom sees the face of the man he’d been lusting after only moments before, he’s shocked. No, it can’t be, can it? Vincent? From high school? The same Vincent who was bullied mercilessly by Tom’s friends all those years ago?

Tom has carried the guilt of what was done to Vince for over two decades. Back then Vince was overweight and a bit clumsy. Not that that mattered, of course, but it gave ammo to Tom’s horrible friends to constantly bully the other boy. In the here and now, Vince is anything but overweight and clumsy. Sure, he fell from the ceiling, but there’s a reason for that (revealed later in the story).

When the two men recognize each other, sparks fly – the good kind this time. 😉 They agree to a drink later and meet up in a local bar. Vincent is wearing a wedding band, so Tom figures it’ll be a quick drink and then he’ll go home to his empty place. But there’s more to it than Tom realizes. Of course, Tom has a bonehead moment (seriously…. this formed my opinion of him) and rushes out of the bar, pissed. If anyone should’ve been pissed, it’s Vincent. Just sayin’.

“I’m not going to sit here and listen to this shit.” Tom stood, slamming his hands down on the table and slopping his drink. “I’ve spent my entire career patching up people who’ve been injured and saving lives, and I don’t need to earn the approval of an electrician, thank you very much.”

I’ll just throw this out there…. if there’s one thing I despise it’s when a person makes someone feel “less than” for whatever they do in life or their circumstances. While Tom’s comment was said in anger, it did not endear him to me in any way at all.

Things between Tom and Vince get fixed not long after at a charity event that Tom just happens to go to after storming off from Vincent earlier. They come together in a strange way and end with a HFN, though I believe the ending was meant to show a HEA.

This is a cute story and I enjoyed it. However, and while I know it’s a short story, I felt more should’ve been added in regards to specific parts of the story. The ‘wedding band’ thing (I won’t give it away) – I understood where the author was trying to go and how she wanted to add a bit of fantasy to the story, but I felt that it kind of fell flat because it was too rushed. I love the idea behind it, but I don’t feel that the author brought it out to my satisfaction. Maybe a couple of more details would’ve worked better for me, or maybe had a few more pages been added… I’m not sure, to be honest.

I didn’t like Tom at all. Vincent? Sure, he was a good guy (and much too forgiving, in my opinion), but Tom came across as a pompous ass and not just when he rushed out of the bar. Usually if I don’t like one of the main characters that affects the entire story for me. Unfortunately I believe that’s the case here with Tom. Another thing that might have made the story work better for me is if Vincent of the here and now was still similar to how he was in high school (as far as appearance) when the two men meet again. Why did he have to turn into this thin, hunky guy in order to get Tom’s attention? I get that people want the two ‘perfect’ characters, but it kind of comes across as “You weren’t good enough then, but since you’ve lost the weight, c’mere!”

Overall, a nice short. If you’re looking for something light, this should work for you. Don’t go into it expecting more than just a light and quickie Christmas story.

Nice review, Cindi. I totally agree with you about the physical changes. Why? Are we all the “E Channel” now, vacuous and superficial? However, it does sound like an easy bite for Christmas and I’m all about that in my Christmas reading 🙂

Thanks, Kazza. I enjoyed the story, but I felt like had Vince not changed so much that Tom wouldn’t have given him the time of day. That bugged me a bit. Otherwise, a nice, quick read.