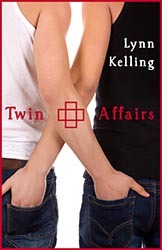 All Evan Savage wanted was a quiet night at the bar, waiting for his boyfriend to finish his shift; what he gets instead is a nightmare. Things were complex enough when his biggest problem was the tangled sex life he and his brother Brennan share with twin lovers Alek and Luka. When a selfless act ending in terrible violence lands Evan in the hospital, Brennan and Evan’s father returns to loom over their lives, asking questions none of the four want to answer.

The young men’s relationships to each other begin to unravel as carefully drawn boundary lines are blurred and crossed. The four must question the nature of their commitments to each other, what they each want, and what to say to those relentlessly demanding the truth. When the most dangerous thing you can do is admit to who you love, and jealousy is a luxury you can no longer afford, brutal honesty is the only remaining key to salvation…

**Banned by Amazon for content but available for purchase from all other major vendors (Fantastic Fiction Publishing, All Romance Ebooks, Smashwords, & Barnes & Noble)**

My Review: (BEST TO HAVE READ BOOK #1 FIRST)

Twin Affairs picks up from where things left off in My Brother’s Lover. Alek and Evan and Luka and Brennan are all together and mostly living at Evan and Brennan’s father’s house in Whippoorwill. Sometimes the Popovic twins go back to their shared place with Presley and Carter in Mitchellsburg, but they are now a twin foursome. Alek is working at the bar, as usual, and Evan is going to the bar with him waiting for Alek’s shift to end. Alek is protective ordinarily, but ever since the truth came out that four years ago Evan tried to 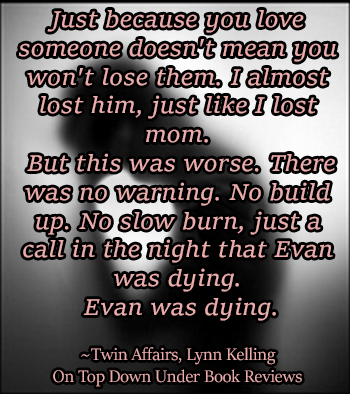 commit suicide, actually died but was revived, he is worried. Evan goes outside when he sees a young guy about to get into some major trouble and ends up bashed, stabbed and fighting for his life. This puts the relationship of everyone into a tailspin. Alek, who is constantly at the hospital, can’t be in the room with Evan, as he isn’t family. Only Brennan can be in with his twin. Alek feels helpless and guilt-ridden for not knowing and not being there to protect Evan. He’s also struggling with the fact he can’t be by Evan’s bedside. Luka  proves himself to be resilient and a much needed conduit between what’s occurring at the hospital and friends, Presley and Carter, and the boys’ dad, Charlie, as well as Jimmy, Evan’s confidant of many years. Brennan is beside himself that he’ll lose his identical twin brother who he didn’t even know existed until several months ago. Who he has become emotionally and physically entwined with. Who he is in love with. Who he now feels at a soul-deep level – when Evan was being attacked, Brennan felt ill and in pain.

It takes Evan months of recovery and during that time things have changed everywhere he looks. He can’t go back to work for a while yet, his broken ribs are still healing, and incredibly painful, as is his left side where he was knifed. Alek and Brennan are acting like Evan is fragile to the nth degree, which upsets Evan further, and is a constant reminder of what happened. Alek has 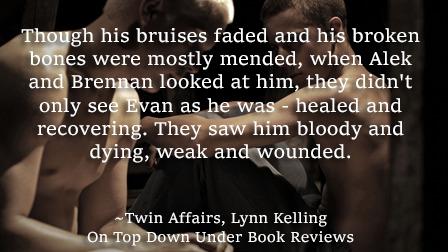 taken on a new, white collar job in HR, instead of working at the bar. He’s in a suit and taking care of bills and (almost) acting as a father figure. Making sure Evan doesn’t smoke or do anything taxing. Brennan is looking further into nursing studies locally and, frustratingly, seems to side with Alek on all things Evan. Two of the people he loves the most aren’t listening to him and Evan feels claustrophobic, unloved and micromanaged. On top of previously dealing with feelings of being a fuck-up for a lot of his life, and battling depression, these new developments are not helping him whatsoever. Luka remains a constant, though. He is still a personal trainer and, even though Alek is against it, worries like only Alek can, Luka is running with Evan every morning and doing some personal training with him to help him get fitter after the attack and hospitalisation.

Pretty soon Luka and Evan are drawing closer and they cross the line of fucking each other on the quiet because Evan needs to be touched, loved,  desired, and Luka will always give of himself. He’s done it with Alek for years.

Alek and Brennan won’t have sex with Evan. Evan wants to feel like everything in his world is the same with Alek, and Luka offers him the alternative. He also offers him the attention and love he so desperately craves. He’s eighteen and he needs to feel like an eighteen year old, he needs to lose himself in passion,  and not feel so hemmed in, which Luka understands. It also comes to light that Luka loves Evan as well. It’s not that he doesn’t love Brennan, he does. He just happens to love Evan as well and admits he has for a while. Both Luka and Evan know they have to be honest with their respective twin and also their primary lover. There are some jealousies initially, it isn’t like they haven’t done things with the other twin, but there has either been permission given or the others have been present. And this has gone against Alek’s advice and rules. Plus, Brennan is in the middle, but he’s like the rest of the guys, pretty fluid.

“Can you at least admit what he and I did yesterday upset you?
“Yeah, it upset me. I’m kind of really angry, jealous and turned on all at the same time.”

On top of this, Jimmy works out that there is more to the relationship than 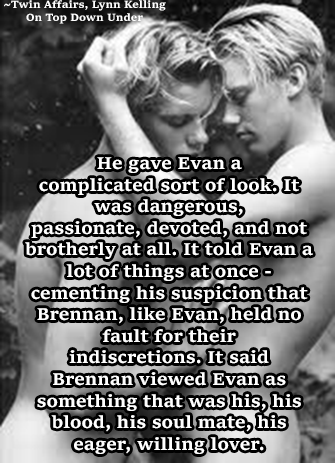 Alek being with Evan and Luka being with Brennan. Evan has never been able to lie to Jimmy and tries to do some fancy footwork when he flat out asks if there is also incest involved. Things become tense between Evan and Jimmy as Evan realises that maybe Jimmy hasn’t been quite as confidential with the talks they have had over the years. Evan suspects Jimmy’s been feeding information back to Charlie. Then the news comes through that Charlie is coming home – he couldn’t be there when his son nearly died in the hospital but he is coming home now. This is problematic given the poly and incestuous relationship his son’s have. It is also problematic as he hasn’t seen Brennan for a very long time and Brennan really does want to be a part of a family, their family.

When Charlie does come home things hit the fan. Brennan misses Maggie, the boys’ mother who he grew up with, and is hoping that he and Charlie will be able to forge some sort of a bond. Unfortunately, it isn’t that easy. Charlie was an interesting ‘development’ in the book, he is not father of the year material, that’s for sure, but he could have been worse. Seeing your eighteen year old sons dating twenty five year olds – and that is a significant difference at that age – is not easy. That they are both twins is…odd. Knowing there is more going on, impossibly hard. Lynn Kelling wrote it well, given the type of story it is, but doesn’t dwell on this too much, just enough to give an edge.

Now I’ve written the backbone of the story, it would be remiss of me to leave out the meat. Twin Affairs is a great title because there are multiple ‘affairs’

He loved Alek, Luka, and Brennan so much, he couldn’t believe his luck. As unlikely a unit as they were, they worked. They filled gaps for each other, and every one of them was essential for creating just the right balance.

When I read your review of My Brother’s Lover I said I could tell I’d love Evan. After reading this review, I know I’d really love him. I love when a sexy book also has a good story behind it. I’m so eager to read this series and I will as soon as time allows.

Great review and those GIFs and pics? Wow. 😉

I hope you do read these books one day, Cindi. I know you’ll like them both. Evan is a good character but so are the others, including toppy and sexy Alek and Cupcake calling Luka. They compliment one another really well 🙂

LOL, Judy, and that’s why you review here. TMI is not TMI. I highly recommend getting ‘acquainted’ with Lynn Kelling, she writes well and she is passionate about her characters.

Wanting to read these books has shifted gears to where the fuck is this book on my ereader? Dont’cha love Tumblr? 😉

Haha, I DO love tumblr. It allows that extra… artistic flair 😀 You should be right into these, Jay.

This sounds sexy. Tumblr is a great add. Lynn kelling is now a fave naughty writer for me. I have to thank you because of your arctic absolution review and lonesome cowboy. 🙂

Oh god yes, it really is intense, isn’t it? Never a dull moment or a break. But so worth it all – this is one of my favourite series.