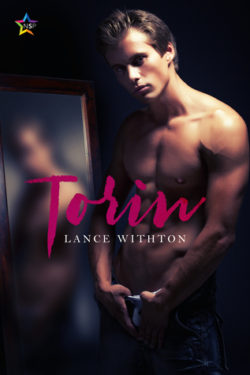 Tags: Gay Erotica With Some Romance

Torin’s anxiety has made it difficult for him to navigate romantic relationships, so instead of trying, he keeps himself occupied with his work. But just because he doesn’t chase relationships doesn’t mean he doesn’t want something, even if he has to get it with a dash of taboo.

At Pillar, the only all-male brothel in the city, Torin makes an appointment with a charming sex worker who goes by the name “Davies.” It becomes hard for Torin to keep his emotions out of the intimacy, and his feelings become more complicated when a designer he works with starts to let on that his interest is more than platonic.

First of all, the blurb doesn’t give any potential reader much to go on and I didn’t realise that this is erotica. Well, actually, it’s kind of erotica – it’s a hybrid of erotica and an attempt at romance. The romance develops part of the way during the book and is at the beginning stages between Torin and another guy, and the L word is used. So romance is part of what the book was striving for. I just found that aspect… odd, but I digress.

Torin decides to go to Pillar, a local brothel. He worries about being caught going there or being seen by someone who knows him, that he’s also not “normal” needing to see a “whore.” So I raised my eyebrows because he was allocated a nickname for anonymity, Mr Rabbit, and yet –

“Mr. Rabbit? It’s nice to meet you. I’m Davies, but you already knew that.”
“You can—uh—you can call me by my real name. I’m—it’s Torin.”
-Davies laughed, took his hand, and shook it. “Torin, then.

Hmm,  what was the point of establishing a pseudonym at all? I mean, he really couldn’t have been too worried.

This book is set around six sessions. It’s about taking things one session at a time because Torin is an apprehensive client. Although initially his contract with Pillar, and therefore Davies, is for limited touching and limited sexual activities, it becomes established fairly quickly that Torin wants more. The ‘more’ Torin wants and enjoys is centred around being humiliated and treated somewhat roughly. That he also likes dirty talk.

“You’re pretty quiet to be such a slut. Let’s see about changing that.”
Torin exhaled, shivering, and made a short sound when Davies’s wrapped his hand around him and gave his cock a squeeze that bordered on both pain and pleasure. Davies pressed his thumb against the underside and Torin muffled a moan behind his lips.

“Pretty little thing like you likes to be manhandled, huh?” he asked. Torin’s cock throbbed again, and Davies laughed. “Yeah, you do.”

There was potential in this novella, I liked the idea of someone apprehensively going to a brothel and discovering things about themselves sexually. Discovering their kink. It’s a good concept. Although Torin seemed to have some different ideas on kink. I liked the idea of the chapters being headed up as sessions. Afterwards Torin would discuss the next session he booked with the manager at Pillar who allowed Torin to confirm what he needed. I liked that Torin was opening up. However, the continual stammering used to portray nerves quickly became jarring. I’m not being insensitive, Torin is not a stutterer, it’s simply the way the author chose to present a nervous man. Initial nerves, okay, I get it, but it wasn’t necessary to continue down that route. I found it took me out of the story.

The problems I had with this book are predominantly twofold, as the book developed I didn’t like Torin as a person. Torin was aggravating, manipulative, in my opinion, and judgemental of someone who was nice to him and doing a job. He also stereotyped. In Torin’s mind if you’re a brothel and a sex worker you must be nefarious or a whore.

While he understood this establishment was a business, the formality of the notes made him anxious. The personal stigma he held against sex work made him unwilling to believe that this brothel was a legitimate business that paid taxes and screened its employees.

But how could he get talked to like a whore, by a whore, and then have a normal dinner with Russell? It sounded kinky. It was like walking on a sexual edge. “Yeah. Yeah. I can do that,” Torin said. His smile reappeared, though quirked at one edge.
Russell raised an eyebrow. “Are you sure? You looked pretty freaked out for a second.”
“I, um—I thought I had a family thing that day, but I remembered we changed the date.”

Whore, again. And on his first date with Russell he’s thinking about hooking up with that “whore” Davies. He also lies to Russell when Russell asks him about a date and time. Torin had organised the day and time with Davies already but said it was a “family thing” instead of tabling information and allowing Russell to make a decision too. Russell may have been up for an open relationship with Torin. So part two of my issue with this novella is the skirting of a line between erotica and romance. It didn’t work for me.

“There you go. Just like that.” Davies unbuttoned and unzipped his jeans, then pulled out his cock. “Do you want it raw, bitch?”
Torin paused. While he neither expected nor wanted this encounter to be romantic—the last thing he needed on his mind was to remember making love to a whore—he did want to see more of Davies than just his dick.

There is nothing wrong with the dirty talk during sex, it’s what Torin wants. It’s a very popular part of sex, a kink for plenty of people. It’s the inner thoughts about Davies by Torin that are disingenuous and hypocritical and don’t do the book or character any favours. This was a theme for Torin throughout, one I railed against as I read.

There’s also this religious-style guilt narrative which is unsexy and sad. In erotica it’s an uncomfortable fit. In romance it’s going to upset people who hate cheating. If you write something, one way or the other, just go for it. Plus whore is used again – seriously, I hated that word (even more) by the end of this novella.

Torin was panicking again. In under an hour, he had to meet Russell at the restaurant for dinner. He’d fucked a whore, cleaned up, was going to primp at home to cover or at least rearrange the sin on his soul, and then he’d go out on a date.

I got to the point where I thought to myself that this novella should have been called Torin and the Whore.

What I’m not fond of in my reading, in general, are people being hypocritical. Torin stumbling and shy one minute then deflecting questions like a pro the next made him look deceptive. Making deliberate decisions to lie at the very beginning of something he actually wanted, a relationship with Russell, was not a concrete foundation for the romance aspect of this book, it felt confused and awkward. I’m also going to be all judge-y and call you a selfish, hypocritical arsehole, Torin.

The emotions inside him were conflicting. He felt guilty that he was going to go on a date with Russell after this, but the thought of interacting with both Davies and Russell on the same day was a turn-on.

I found the above tacky, not to mention unsafe – I’m stressing this for the romance because in erotica I’m not phased. The problem with this book lies with the fact that it tried to straddle two things, and as far as I’m concerned it did it unsuccessfully. If it stayed purely within erotica, I believe the story would have been better for it – with whore chopped right down as Torin (perhaps. I’d like to think) grew sexually and emotionally in the story. And there needed to be no Russell to confound things. Mind you, I believe Torin has been well received on Goodreads (as of writing this review) so check the other reviews out. If this is your kink, if it sounds like you, then maybe you’ll be good with this book. For me it’s no more than 2 Stars!

I wouldn’t like seeing the word “whore” all over the place either. It looks like Torin had some pretty serious issues. The quotes you used say a lot.

It kept slapping me in the face the whole way through. The quotes tell the story of why I felt accosted by the word “whore.”