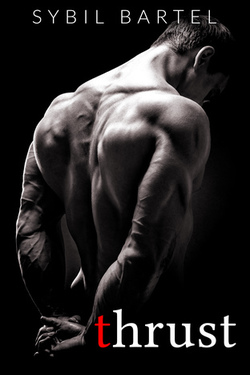 My hands on your body, my mouth hovering over yours—I’ll tell you everything you want to hear. Ten inches of real estate never felt so good.

But don’t take my word for it. My client list is long and my motto is short—one single thrust and you’re mine. I’m not good at what I do, I’m fantastic. But satisfaction doesn’t come cheap. So open your wallet and prepare to forget your name. I’m about to ruin you for any other man.

One single thrust and you’re mine.

There are so many reasons why I shouldn’t have loved this book. Hell, the title and blurb should’ve had me running far away from it. Not that there’s anything really wrong with the blurb, but the ‘ten inches of real estate’ kinda turned me off. Also, I’ve not read hetero romance in quite some time so I went in waiting on the inevitable moment where I’d remember why I stopped reading them. That reason? Doormat female characters who come across as strong and then turn to mush because a big, bad alpha man comes into their lives. Turning to mush on occasion isn’t a bad thing. What’s bad is when the females automatically revert to being 12 again and stop being the strong women who stand up for themselves. Thankfully, Olivia in Thrust wasn’t like that. Had she been I wouldn’t have finished it. She had a few TSTL moments but not so many I was turned off.

Alex Vega is an escort. Not just any escort. He’s making tens of thousands of dollars a month. He knows exactly what to do to satisfy his clients and he makes sure he gets off too – every single time. It also helps that he’s very endowed. 😉 Alex has a five year plan. He’s three years out of the military (the Marines) and his plan is to make as much money as he can in five years before deciding what else to do with his life. He drives the most expensive cars, owns a lavish penthouse, and only wears the best designer clothing. From the outside looking in Alex looks like the ultimate wealthy businessman. In a way that’s exactly what he is. He has the wealth and isn’t ashamed to flaunt it. The women love him and are willing to pay whatever he charges because they know he’s going to give them the best sexual experiences of their lives.

Early on, Alex was a little too cocky and vain for me. There’s being confident and there’s being Alex Vega. He thought he was God’s gift to women and if they weren’t interested he got pushy. This is what happened when he met Olivia, the heroine of the story.

Olivia has worked for years with one goal in mind – to open a charitable organization that trains service dogs for veterans with PTSD. She’s so close to accomplishing that goal. She’s planned an art auction and hopes to make enough to get the business off the ground. Everything is going well at the auction. All the paintings have been bid on and she’s seeing the light at the end of the tunnel. That is, until Alex Vega breaks his own rule of not taking it out of the bedroom and arrives with one of his clients.

I had a waiting list as long as my cock. I could’ve pulled a few names and made more money fucking than ten grand for a charity event. But I didn’t. I was driving to a half-finished penthouse to look at paintings because I wasn’t about to admit that after three years of screwing my way through Miami’s wealthiest women, I was burnt out. 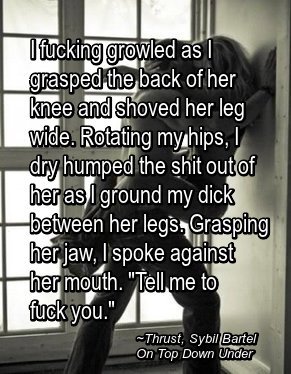 He sees Olivia and immediately sets his sights on her. He wants her and will stop at nothing to have her. This includes not breaking up a fight between the client he’s with and one of his other regular customers. The other regular customer just happens to be Olivia’s boss. Can we say cat fight? The fight between the women does more than cause a scene. It ends up getting Olivia fired and all the bids disappearing. The fight could’ve ended before it really got started but Alex was too busy playing games with Olivia. He’d stop it but only if Olivia gave him something in return.

This begins the relationship between Alex and Olivia.

A big argument between the two ensues when all the patrons disappear. After too much alcohol on Olivia’s part, and even a few thrown liquor bottles (I bet you can guess where they were thrown), they end up having rough, angry sex against the bar. I have to say that that particular sex scene was hot as hell. Hmm… every sex scene in the book was hot as hell. 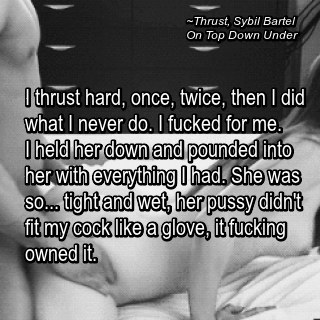 Over a VERY short time period Alex pursues Olivia and she gives in because the sex is so good. She’s the first woman Alex has slept with and not charged in over three years. It scares the hell out of him. When emotions get involved – with both characters – is when the story really takes off. Olivia is no doormat, as I stated above. She has no desire to have any type of relationship with the ‘player’ that is Alex Vega outside of sex but she damn sure plans on using him to get off. Alex has other plans. For the first time ever he’s wanting a real relationship and is willing to give up his profession without looking back. The problem? Olivia doesn’t know what Alex does for a living. There’s a bit of drama as the story plays out but thankfully it’s resolved quickly. I really loved the way the author wrote both characters. They each had issues that had to be dealt with from their pasts but the story wasn’t bogged down with unnecessary details in regards to them.

Which brings me to the secondary characters.

First, there’s Jesse, Olivia’s best friend and the man she thought she was secretly in love with for years. I couldn’t get a good feel for Jesse which is why a half star was knocked off my rating. I felt like Jesse was kind of a missed opportunity and that his part of the story wasn’t resolved to my satisfaction. Saying any more than that will give too much away. There is a resolution but it wasn’t enough for me. Maybe others won’t feel the same.

Second, there’s Talon, a friend of both Jesse and Alex. Talon is only in the story briefly but it was enough to confuse me. He was written to sound like he’s single. I’m basing this on flirting and sexual comments to and about Olivia. When I finished this book I checked out others by this author and discovered that Talon’s story had already been written and published – several months before Thrust.

Third, there are Jared and Dane, who are also only in this book briefly. Jared and Dane will have their own stories soon. Dane’s, I’m interested in reading. Jared’s, not so much. I wasn’t a fan of him in this one for reasons I can’t say in this review. Maybe that’ll change later.

Overall, this is a really good book. It really surprised me because I thought it would be nothing but sex and no real story. I also expected to hate Alex all the way to the end. Not only was Alex and Olivia’s story good, but I loved Alex before I was done. Told in alternating points of view, the reader is allowed inside the heads of both main characters. This is very important because you’re able to see that all is not as it appears on the outside with either one.

Also, look at that beautiful cover. I’m known to buy books based solely on the covers and that’s why Thrust was a one-click for me. I’m glad I ended up loving the story.

Highly recommended if you want a good love story and some hot as hell sex scenes. I’ll definitely be reading more by this author.

Okay, I have to start with the ’10 inches of real estate’ – bahaha.

The quotes in the pics and GIFS are hot, and that one GIF and quote from in the shower? I’m inspired :):) I love a good het romance whenever the woman is strong, the guy is not a total alpha jackass and there are good, mature actions and resolutions. Glad you liked this, welcome back – great review – and I’m a cover book buyer too.

The 10 inches of real estate cracked me up. Alex was very proud of his 10 inches. 🙂 It doesn’t say it but they were actually in the shower when Olivia was begging him. So of course I had find the perfect GIF for it. 😉 I had entirely too much fun ‘researching’ for this review. The book was really good. It’s not often I find a good het romance where I like both characters. I’ll definitely be reading more by this author. Thanks! I’m happy to be back. You and I share the cover love. I lost count of… Read more »

My stars! this sounds sexy. As a reader of all kinds of books I was happy to see your review of this m/f book and now it’s on the must read list! 🙂

Thanks, Deb. If you love a sexy M/F story I highly recommend Thrust. You won’t be disappointed.

Damn on that shower vid! Dont usually like MF stuff but I really wanna know about the 10 inches of real estate. LOL!