The Shadow Mark by Mason Thomas 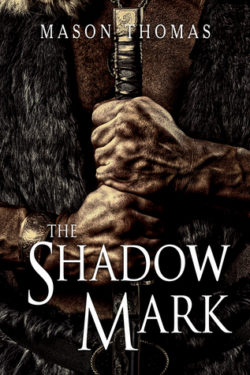 But the runes are far more significant than they realize. They are a message from the shadow realm, a dark memory of the past—one holding evidence of a bloody massacre and its savage architect; one that will shake the kingdom to its foundation. Risking arrest and execution, Auraq fights to get Kane to the capital city where the cryptic marking can be unlocked. And with assassins close on their trail, Auraq might never get the chance to show Kane what’s in his heart—or the way their journey together has changed him.

Auraq Greystone is on the road when two men come upon his camp. Old Tan and his apprentice  don’t appear to be trouble but there does seem to be something about them that Auraq isn’t certain of. Old Tan has a workshop in a small town but he needs to visit the nearest city with Kane, his apprentice. Both Auraq and Old Tan were in the military at different times, Auraq more recently, and both fought in the Lendera province against the Volfic barbarians so a quick but respectful camaraderie is established. It isn’t too long before they find themselves attacked and the book turns into a cat and mouse story from here. Old Tan is killed by people using weapons and wearing garb with an insignia Auraq hasn’t seen before. Before he dies Old Tan asks Auraq to promise to take Kane to mages to help him, to finish what he now can’t. Auraq is a man of honour and his word and he takes Kane under his wing as he promised a dying man he would.

The Shadow Mark is an action packed book for the most part – Auraq and Kane have to outwit a dark foe that has eyes everywhere, one that engages deadly wolvren to help hunt the men down. Auraq knows there has to be more to Kane than a simple tanner’s apprentice. No one like these men would choose an apprentice to continually chase. Kane is left with no option but to trust in Auraq and he shows Auraq his arm, telling him the story behind a tattoo which seems to have

a life of its own and is giving him piecemeal visions. Because the people hunting them probably believe they will most likely head to the nearest city, Auraq decides to take them in another direction, north to Har Tesera – his home town, somewhere he knows well and has contacts in. There are many districts to Har Tesera, plenty to get lost in, and there’s the Academy District where the best mages are trained. If he can get Kane to the Academy he will have fulfilled his promise to Old Tan. Along the way they discover that the people hunting them are the formidable but clandestine group the Order of the Jackal and it takes a hefty purse to hire them, so who’s behind it all and why?

There is plenty of action in the well named  The Shadow Mark – swords, explosions, fighting, and I swear Auraq is the Terminator of Davenia, you cannot best that man.

It is a well written fantasy with excellent world building, it provides the reader with a great sense of 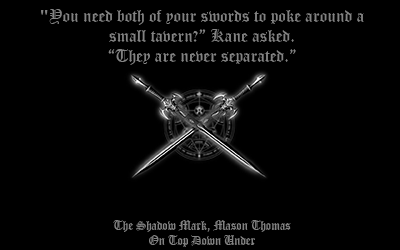 life in another time and another world. The escapism is first rate. The journey from their initial camp then to inns, Har Tesera and it’s different districts, to the capital of Davenia is one big adventure where you can’t wait to see what’s going to happen next.

I liked the main characters – I thought Auraq was a man of his word and Kane kind and uncomplicated – although they both have difficult backstories and are  attempting to deal with them and remain intact. The secondary characters have depth. Old Tan, for as little as he was in the book, loomed large over their quest/adventure. Malgar, Auraq’s father, and his initially strained relationship with Auraq was very well fleshed out. I felt Auraq was well developed, if not the most communicative at times. Kane was sweet but not as easy to get as close to throughout which impacted the romance and diluted chemistry. I would have liked this book better if Auraq and Kane simply became close friends.

read book #1, so for those who would like to know, it is a definite standalone book within a series.

I liked the backstories about both men and that it comes out bit by bit, especially in regards to Auraq. Kane is understandably guarded about the tattoo on his arm and his past, but once he shares he truly does come clean.  Auraq was pretty tight lipped and extremely guarded with good reason.

When I started this book I was really hoping for a good quality fantasy book, I’d DNFed three books just prior to picking this one up and I was nervous. As it turned out The Shadow Mark was just what I was looking for, a rollicking good fantasy/action/ adventure /suspense story. As for the romance aspect, I just didn’t feel any chemistry between the MCs, others may completely disagree on this point, but I wasn’t particularly worried because I felt a strong friendship and respect between Auraq and Kane and the rest of the book took care of itself, it was thoroughly enjoyable and engaging and I was reading for the action and fantasy arcs.

Recommended for people who want to feel like they are truly reading fantasy – complete with a non-contemporary style to the language used, for those who enjoy being spirited away to another place, and enjoy action, suspense, and characters who are eminently likeable all wrapped up in some very nice writing. Bring on book #3 in the series. 4.5 Stars!

This looks really good. It says a lot when a book that’s 2nd in the series can truly be read as a standalone. I can tell I’d enjoy the world building and I’m curious about the tattoo. Love the visuals.

I was glad it was a definite standalone, but I’ll go back and read Lord Mouse now because this was so enjoyable.