The Left Hand of Calvus (Warriors of Rome #1), L A Witt 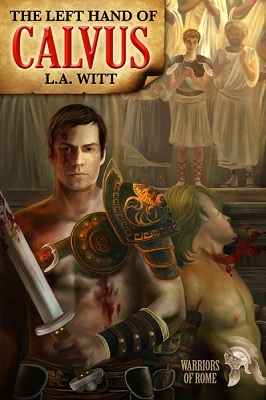 A nice introduction to the Warriors of Rome series. A well written and interesting LGBTQ read.

First of all the official blurb on the book gives plenty of information about what The Left hand of Calvus is basically about. I’m adding my perspective, but I must say I found it a difficult book to review.

When the book opens Saevius, the primary character, has finished as a gladiator in Rome. He and three other men from his familia gladiatori are assigned to be a Pompeiian politician’s bodyguards. The other gladiators believe it’s an easy job, they say Pompei is bountiful. Saevius would prefer to have a choice, to be in either Hurculaneum or Pompei as a free man, and sees this position through wary eyes –

Not that I have a choice now. Pompei is my home until I’m sold or I die. or my new master sees fit to free me when I’m no longer of use to him.

Saevius’s new master, Laurea Calvus, is a piece of work, and he does have a use for Saevius. He decides that he will not be his bodyguard, rather he will enter the life of a gladiator, again, to spy on a ludus, a gladiator school, he feels his wife, Verina, is visiting to sleep with another man. It’s common practice for wealthy men’s wives to sleep with slaves – they won’t talk – and the men have their own bit on the side. But a freedman or another man of wealth does not bode well socially for the man who’s wife is bedding them. So Saevius is given forged documents by his new master, Calvus, that identify him as a auctocratus, a freedman who volunteers as a gladiator/slave for a contracted term to a specific ludus. So Saevius is back where he doesn’t want to be, yet again.

Written in first person from Saevius’s POV, it gives the writing a somewhat tense and  suspenseful feel. It also gives good insight into what it’s like for Saevius to be caught between a rock and a hard place. Saevius is a man well and truly caught in the middle, with his life in the balance. Saevius knows he’s damned if he does, damned if he doesn’t –

Regardless of Calvus’s reasoning or what he plans to do once he knows the name of his wife’s lover, is there any place more dangerous for a man than the middle of games played between a wife and the husband she’s scorned?

Yes. There is. So much for an easy job, being a politician’s bodyguard, as Saevius is thrown into a covert position in a ludus that has a lanista, or owner of the gladiators, with a brutal reputation. Drusus. He is starting all over again as a gladiator in unfamiliar territory, with a master who is not known for his easy going manner. Being with gladiators who don’t trust easily, Saevius has to establish his position in the pecking order amongst the other men, one of whom he has beaten in the arena previously; who does not take too well to Saevius being there.

Being caught between a husband, wife, and now two masters is no easy task. Certainly Saevius is constantly worried. He fears that his beating heart can be detected, that Drusus can see right through him, and knows why he is at his ludus. Which is only heightened when Drusus feels that the numbers don’t add up. Drusus interrogates the five newest men citing a scroll being found which points to someone within his ludus as traitorous-

“Five citizens,” he says now, his voice even and cold. “All joining my ludus as auctocrati in very, very rapid succession. I rarely get one in a year, but suddenly five, since the start of Spring.” He smiles, and I swear it makes his eyes colder.

Saevius, himself, suspects that Laurea Calvus has sent other slaves to spy and anytime now someone will roll over on him. Calvus purposely sent Saevius to Drusus with 500 sestertii (Roman coin) instead of the original 700 as a set-up. So he constantly has the fear of Calvus’s threat going through his mind –

I will see to it the magistrate asks Drusus if he received the full seven hundred sestertii. Am I understood?

To make matters more intense, as weeks go by and Saevius proves himself an asset, he is a left handed, skilled gladiator, and a man not prone to gossip, Drusus asks him to spy on his gladiators for the traitor. This intensifies Saevius’s feelings of …stress. The book follows the life of a slave, a gladiator, in Roman times. The life in a ludus – the beatings, tussles for position, threats, constant eyes watching you – from not only the lanista, but the other gladiators. Saevius’s life is always in someone else’s hands and it’s painted well here. I despise slavery and gladiators were just that, slaves. They lived with death looming large over them as well as being totally at the whim and ownership of mostly unscrupulous masters –

Enslaved, and tagged. I barely keep my stomach from coming up my throat as the tag is fastened around my neck. I had fully expected to wear one for Master Calvus, but something about the coolness of the chain as it settles against my flesh makes me shiver. I’ll always be owned by one man or another – have been since I was born – but today I am once again owned by a ludus. By a damned lanista

One part of the book covers the arena and the events around it. There’s not much on that, however It could be unpleasant for some –

Thank the gods the two men who had their bowels ripped open were removed quickly, but even now, that foul smell lingers.

While training at the new ludus, Saevius discovers that Drusus is a shrewd, intelligent man, younger, slighter, and fitter than the other lanistae. That he is hard, but a reasonably fair taskmaster. Which is intriguing to Saevius. There is a lot more to the story than most parties know and I found myself racing through the pages to see what would happen. I liked Saevius, I grew to like Drusus, and dislike others. But it’s hard, as this is a more realistic book than some in this genre.

The Left Hand of Calvus is a book of quite a few parts. Yes, it is historical, it is set during the Roman Empire, it is also a mystery. Who, if anybody, is sleeping with Verina? Why is she suddenly coming to the ludus with a child, the son of Laureas and Verina’s deceased daughter? Why is Drusus slipping out of the ludus without bodyguards? Which master will Saevius defer to or betray in the end, and why? Will Saevius get out of this situation intact? Can he gain freedom?

If you read The Left Hand of Calvus thinking it is going to be standard M/M fare, you will be disappointed. If you go into this book thinking it’s going to be a sex-filled gladiator romp, again, you will be disappointed. There is no sex. There is an eroticism to it, it’s even romantic, perhaps not in the strictest sense of the word. I found it romantic, but then I always do when people accept others for who they are. The ending is a good one. I can’t describe it any more than that, otherwise I will give things away that are better left to the reader. Because there are twists, and I will spoil the book if I say more.

There is a glossary of terms at the end of the book if a reader wishes to verse themselves in the terminology that Ms Witt uses, although I feel it is made clear in the writing without spoon feeding the reader.

The only complaint I have on the book is the use of certain contemporary words – I believe “gonna” and “ain’t” are the primary culprits – that pulled me out of the flow of the book; the time and the place.

I thoroughly enjoyed The Left Hand of Calvus. I particularly liked how the title was addressed in a clever manner. I love it when a title makes sense like that. The writing was neat, efficient, intelligent, and had Riptide Publishing all over it; short, sharp inner thoughts included. I was invested in both the story and the characters.

I have actually pre-ordered the whole Warriors of Rome series, and The Left Hand of Calvus is a cracking lead-in to the rest. I do like the Roman Empire, it is a fascinating period in history, not always the nicest, and I felt that a small part of it was well depicted in this book. I’ll be honest, L A Witt writes good darn sex, but, interestingly, and in quite an apt fashion, there is none here, just some very good historical and entertaining writing. I have yet to read an L A Witt book I didn’t like and The Left Hand of Calvus just strengthens that for me.