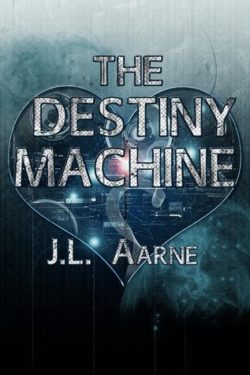 In a world cured of death, Aarom is an outlaw.

The world should have ended twenty years ago. Without the invention of the Destiny Machine, it would have and in a lot of ways it’s a blessing. No one goes hungry now, murder is a thing of the past and life is beautiful and peaceful. In other ways, for some people, it’s a lie and a curse that they can’t bear to live with. They sense the wrongness of their existence, but now they inhabit a world where it’s almost impossible to die.

You can’t even kill yourself anymore.

Aarom is a prophet, a member of a rare group of people who would have survived the Armageddon that the Destiny Machine derailed. He has the power to see behind the curtain. He can give to people the deaths they have been denied. Their true destiny.

In his personal life, he’s at a crossroad, torn between letting go of a past that made him and Jonathan, who he’s secretly loved for most of his life. Jonathan isn’t a prophet, he’s a happy, normal member of society, but he looks forward to the rare times when he sees Aarom and sadly waits for the day when he will stop visiting. Aarom ultimately has to make a choice to either be brave and honest with Jonathan or walk away completely. It’s a real life and death decision.

Aarom is a prophet, someone who seeks their own death only to find that they are one of the few who would have

survived the end of the world, irrespective of the utopian Destiny Machine’s parallel universe – think along the lines of The Matrix. He walks the streets of his district at night looking for supplicant’s flags that signal someone in that house wants to die. Since the Destiny Machine was introduced twenty years ago there is no murder, no crime, no (more) war. No illness or suicide. There is a long life expectancy in this manufactured system, but some people have developed ennui and a darker vibe of déjà vu. They sense that the life they live now is a shadow of something real but it generally seems intangible, a shadow in the background. Those who sense it the most, who have noise that can’t be blocked, call on the prophets to lay their hands on them and help them with a story about their life in the  parallel but real dystopian world as they pass over.

The man Aarom has always loved, since they were children, is Jonathan – although he’s never told him how he feels. He walks by Jonathan’s house virtually every night. Sometimes Jonathan knows he’s there and asks him in for a coffee and Aarom gives Jonathan banned books supplicants have chosen for him on the day of their death – (ironically) books like Fahrenheit 451.

No matter what Aarom feels for him, this cannot be. A cup of coffee, a book, a smile, a little light conversation; he can have that, but nothing more.

Aarom flies under the radar by using supplied retina and chip technology to give him a new identity. He survives on credits given to him by supplicants. All prophets are told to walk away from their old life, and those he knows do, but Aarom finds it impossible. He feels like leaving people he cared about completely behind is akin to losing his humanity. He can’t be caring without remembering and understanding why people choose to die, helping them over as peacefully as he can. Aarom visits his mother regularly but stays in the shadows as he watches her garden, she believes she buried her son a decade ago and he isn’t going to allow her to think any differently, it’s safer she believes as she does. Once you become a prophet you are an outlaw in this utopian society. There are public broadcasts and notices posted about punishing them, but risky or not Aarom can’t help but watch over his mother, and he can’t let Jonathan go. On occasion he tries to keep his distance, but ultimately he can’t stay away.

A lot of this book is a melancholy look at Aarom’s hidden love of Jonathon, his life seeing to the people who request a reprieve by death from their Destiny Machine lives. He also visits Iniquity, a virtual reality den – think Total Recall – where he shoots up the designer drug Sunshine and uses tailor-programmed VR to live life again with Jonathan when they were young, or telling a virtual Jonathon he loves him, allowing Aarom to touch Virtual Jonathan, something he can’t do as a prophet because it brings death.

There are some secondary characters who are totally underutilised in this book. They gave me more questions than

answers. It’s not always a bad thing if other parts of a book and the MCs are developed well, but if there ever was a book that needed length, The Destiny Machine is that book. It’s only 187 Kindle pages, although some of that page count is devoted to previews of other books by the author. This is so much story to tell in so few words. Sci-fi is not an easy genre to fulfil everything required in this page count. They are usually considerably longer. Marion Flowers, the Chief of Police, is someone who needed more, even though you do get extra when there is a tip over the precipice. Sabra, the unofficial leader of the prophets, needed more. The cold and sycophantic Sonja Fletcher-Marks is another who should rate more than a question mark mention. Most importantly, the Revelation-spouting Matthew could have had so much done with him, and his arc was unceremonious in it’s ending. Still, the world building is pretty damn believable and real, especially given the state of our world now, and while I felt deficiencies in some areas, others made up for them.

The sci-fi components are all intriguing. The religious theme is also weaved well into the end-of-days theme – prophets, supplicants, acolytes, Matthew prophesising. The romance / relationship between Aarom and Jonathan remains the primary arc though, and it’s strong and achingly sad and beautiful all at once – they are compelling MCs. I honestly did not know how the author could finish this book without heartache.

While there isn’t necessarily anything new here, it’s more the possibilities, the way the story is told, the key relationship that kept me

turning pages. The author gives a blatant nod to classic sci-fi movies and books, there are parallels to those ideas and worlds in the world J L Aarne has crafted. Because I am such a character obsessive, I’ll add once again in a book review of this author that J L Aarne is one of the most interesting writers in the queer romance and fiction genres. Their characters have depth and they never fail to make me want to know them or become emotionally involved while reading about them. Aarne mixes it up within genre, when I’m looking for more than beige in my writing, this author creates something offbeat and vibrant. Aarom and Jonathan are believable as two men who have loved one another nearly all their lives, since that first kiss at eleven, and I understood why. I bought their love. I wish The Destiny Machine was longer with further development of some characters and ideas, I hope J L Aarne revisits this novella and revises and lengthens it because I just know it would be great, such is my faith in the calibre of their writing. Overall, this is fine storytelling. 4 Stars!

This looks like a very unique story. I’m not normally a fan of sci-fi but I got sucked into reading about Aarom and I find myself wanting to know more. Great review. The visuals and quotes are, as always, awesome.

I’m not a huge sci-fi fan myself, it just depends on the author, but this is very interesting reading, and it’s J L Aarne. I’m loving this author 🙂