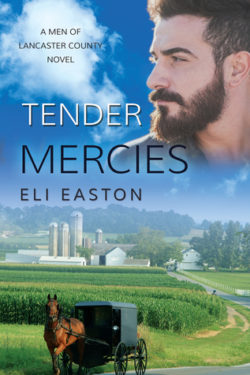 Eddie Graber’s dream of a sanctuary for rescued farm animals was about to come true when his partner backed out at the last minute. Now Eddie risks losing the twenty-five acre property in Lancaster County—and all the hopes he held for it—before the project even gets off the ground. He needs help, he needs money, but most importantly, he needs to rediscover the belief in a higher purpose that brought him here in the first place.

Samuel Miller worked hard to fit into his Amish community despite his club foot. But when his father learns Samuel is gay, he is whipped and shunned. With just a few hundred dollars to his name, Samuel responds to an ad for a farmhand and finds himself employed by a city guy who has strange ideas about animals, no clue how to run his small farm, and a gentle heart.

Samuel isn’t the only lost soul to serendipitously find his way to Meadow Lake Farm. There’s Fred and Ginger, two cows who’d been living in a garage, a gang of sheep, and a little black pig named Benedict who might be the key to life, love, money—and even a happily ever after for two castoffs.

NOTE: This title is set in the same region as book #1 but features a new couple. It can be read as a stand-alone.

This is pretty sweet book. It’s also quite fortuitous on several occasions; delightfully so. Eddie has not long bought a farm in Lancaster County in Pennsylvania with his partner Alex. Alex then decides to confess that their relationship is no longer working and a farm hasn’t ever been his dream. You can’t totally dislike Alex, not really, he co-signed so Eddie could get the place. Yes, I suppose he was selfish, to a degree, but fortuitous, remember? Meadow Lake Farm is twenty five gorgeous acres with the loveliest bones and amenities to set up a farm animal sanctuary. Eddie really doesn’t know much about running a farm or about farm animals in general, other than he wants to save them. Eddie is a city guy. A practising vegan. He’s also a sensitive, kind-hearted soul who rubs his chest whenever things are emotional or somewhat stressful – because Eddie feels things deeply. Once he’s settled in at Meadow Lake, he knows he needs help so he places an ad. He may be inundated with enquiries, but no one fits the criteria of being interested in a full time job that is based on board and $50.00 cash per week.

Samuel is a nineteen year old Amish lad who has just had the bejesus beaten out of him by his Da. Samuel’s been same sex attracted for as long as he can remember. He even has his own fantasy around a place called Green Valley 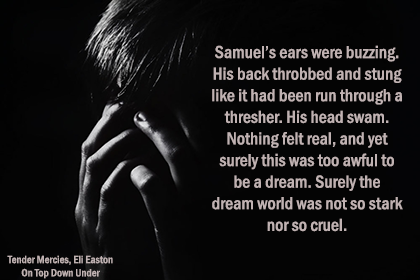 where he can be with a man and have a family and be respected. His Da knows he likes men because when he was younger he was caught with another boy, exploring. He’s noticed his son’s ‘lustful’ looks at other men since then. This time he’s looking out the window at a neighbour. This ‘abomination’ on top of Samuel’s club foot is clear evidence to his Da that this son was born wrong. He takes a switch to Samuel before he kicks him out, shunning him from his family and community. Samuel walks into Lancaster with his club foot causing pain, his ripped up back doing the same with blood on his shirt which is, I guess, luckily covered by a jacket. He knows there is a shelter in town because he’s delivered food there before. He can spend a night to rest then he can look for work. Another bit of luck because it’s so hard to find a bed at any shelter just like that.

Eddie has money worries now Alex has left him on his own. He has enough for a year, tops, assuming nothing untoward eats into that money. He ghost writes for a famous author who happens to be an alcoholic, so that’s a slight income stream. With an emphasis on slight. He is mortgage-stressed, trying to create a sanctuary where he can make extra money to pay the bills while caring for more and more animals. He’s counting on open days and donations helping out in that regard. Only things aren’t working out like his hopes and dreams. He has to refuse animals he would dearly love to take in because the ones he has now cost enough. There was another party interested in buying the farm when he was the successful purchaser – a local chemical co – that is now offering Eddie a lot more money than he paid for the property. They’ve also given him several months deadline to accept the offer, which means he has time to think and worry. He’s very tempted to sell and maybe buy something smaller, but that won’t allow him to help the animals he wants to. Another property won’t feel the same. The chemical co doesn’t sit right with him either.

Samuel walked to the pocket door but turned before heading upstairs. His face was serious. “I know I don’t look like much, but I promise you won’t be sorry.”

When Samuel walks out to Meadow Lake Farm for a job interview he looks pretty ashen and dishevelled. It’s the  day after his beating and being excommunicated from his family and religion, and when Eddie first sees him he isn’t at all sure this is who he wants as his farm hand. I was screaming at the Kindle at this point because I felt so much hurt on behalf of Samuel. For god’s sake just…. give this boy the job!!!! He needs it!!!! If you only knew what has happened to him!!!! So yeah, its fair to say some emotions (and expletives) flew around the room leading up to this point. Thankfully Eddie heard my vociferous pleas because he takes a pretty beaten down but resilient Samuel on for a trial, giving him his own room and bathroom in his farmhouse. All I can say is I felt so much better once Samuel was there. I don’t think my heart could have taken anymore and I would have started rubbing my chest like Eddie.

For a while both men have their own issues. Samuel is initially lonely, he misses his family, particularly his mother and his youngest brother, Matthew. He mourns the loss of the camaraderie of a large communal group within the religion he is used to. Eddie is dealing with a partner leaving and trying to make things work. To not let his animals down. Not let Samuel down. So they are alone emotionally and grieve and worry side by side until they realise how connected they’ve become.

Still, Samuel craved touch so badly he thought he might die. It didn’t even have to be sexual, just… he needed to feel like he was worthy of being held, that he was visible and real, young and alive. Not ugly. Not unlovable. Not forgotten.

Eddie and Samuel have a slow burn romance. They’re nice together. They find each other in a time and place when they both need one another, on multiple levels – a bit more fortune that they will grow to appreciate. If you like hurt/comfort reading then you’ll be happy to know that there is a hurt/comfort theme well and truly within the pages of Tender Mercies. I was happy when Eddie discovered what had happened to Samuel, that it allowed the tight-lipped Amish boy a chance to open up to someone who helped make him feel normal, not an abomination. Eddie is appalled by Samuel’s treatment by his father. He hates to see anyone and anything under the sun hurt or bullied. He has a big heart for life, for care, for love. Samuel is uncomplicated and innocent and takes most things in his stride. He still eats meat and doesn’t understand Eddie’s farm practices, but he admires him for what he does and what he stands for. How kind he is. Eddie sees Samuel as guileless, hardworking, gorgeous and selfless. Romance books played a part in this relationship too. I liked seeing romance used in this positive manner because love is important in our world and it’s a well used point here.

There are cute animals in this book. Mum and daughter cows, Ginger and Fred, some sheep. Then there’s Benedict the pig who mysteriously turns up on the property. Benedict reminded me of Skippy – fellow Aussies will know who I mean – because he knew things and did things that definitely aided many. It’s very cute.

My only real niggles with this book were that there is something toward the end, to do with Benedict’s backstory, that I wasn’t expecting. It bothered me because I hate animal cruelty more in my face. I wasn’t that fussed with the use of feels and adorbs used in the main narrative of the book either, preferring the extended words of adorable and feelings, but I might just be old and curmudgeonly these days. Mind you, overall this book has a more New Adult vibe to it anyway – Samuel is nineteen and Eddie is in the ballpark at twenty eight. The steam is fairly light on, with two intimate scenes, but they are full of connection and, I felt, very apt for the storyline and characters.

The body under his hands was a man’s body, not a youth’s. Samuel felt broader, more muscular, stronger, than he looked. Maybe it was his unassuming nature, the shy way he moved through the world. But in the dark, Samuel was considerably bigger than Eddie, firm and solid and steady as the earth.

My wrap up is simple. Tender Mercies is easy reading and mostly escapist fun – to a point. There is another side that makes you think and feel as well. There are families who live to a religious code, or general dysfunction, that makes love for their children conditional. There are also animals being treated poorly for profit. This book reminds us of those things through Samuel’s and Eddie’s eyes, and both of the MCs are charming which helps readers relate to their experiences. Together these moments create sweet but thoughtful reading. Ultimately, good things happen to good people in this story, which radiates out. If you usually enjoy Ms Easton’s books, and you’re happy with/ maybe looking for some serendipity in your romance reading, then I believe you’ll rather enjoy Tender Mercies. 4 Stars!

This looks like a sweet story. My heart would break for Samuel. Parents are supposed to love their children unconditionally. It’s sad that there are so many like his in the real world. I enjoy a good slow burn. I know I’d really like this.

Yes, very sweet story from Eli Easton which is their speciality, I guess. Good feelings with a happy ending.