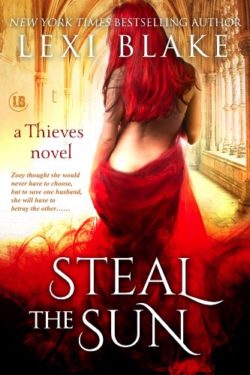 Zoey thought she would never have to choose, but to save one husband, she will have to betray the other…

As Zoey Donovan-Quinn first sets foot in the faery homeland of her beloved Devinshea, life is perfect. Her enemy is defeated, her heart is full, and Neil and Sarah are at her side. Daniel and Dev are happy, so their visit to the sithein should be a pleasant honeymoon full of wonder and joy. Well, except for the part where Zoey needs to steal an ancient gem from the Queen of Faery in order to prevent Louis Marini from killing Daniel.

Reunited with her whole crew, stealing the magical artifact should be relatively easy, but unknown to Zoey, Dev, and Daniel, there are dark forces gathering against them. As her search for the Blood Stone gets underway, Zoey makes a startling discovery that will change her life, and Dev and Daniel’s forever.

When her new enemy finally strikes at Zoey from the shadows, her newfound happiness is shattered, and to avenge the horrific attack, Dev prepares his mother’s kingdom for war. Recovering from the attempt on her life, Zoey and Daniel desperately search for the stone and in the process unmask the real monster behind the assault.

Stopping the real threat, and saving Daniel, will force Zoey to choose sides in an epic war between the Seelie and Unseelie Fae, even if it means betraying Dev and his people.

This was such a good book. Zoey was loyal, brave, feisty and kick-arse from the very beginning, never leaving off with her determination, except for a very personal moment. Great action, great world-building, a fair bit of Gaelic mythology, a bit of Norse, and a whole lot of different creatures are on page – from trolls to ogres to gnomes, to the Wild Hunt, a death god, and banshees. It has moments of gore and deep emotion but the humour was also in full swing – I couldn’t help but laugh out loud, something my husband would have preferred not happening at 2 am, but what can a dedicated reader do? When it’s funny it’s funny.

The poly relationship between Zoey and Daniel and Dev heats up. Even when Dev has immense grief and behaves… 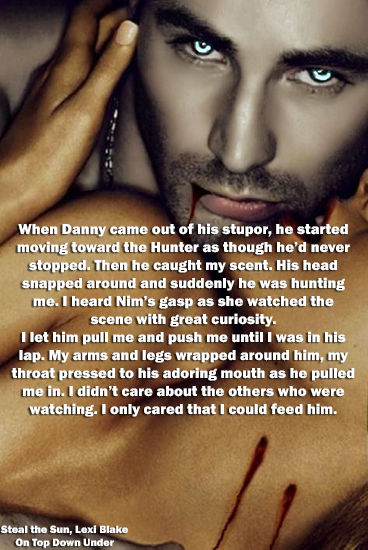 erratically and Zoey and Daniel have time alone, it is still the three of them that drives everything that happens. Their love has left the doubting phase to settle on certainty now. Hallelujah! They are a hot tamale and there is such passion and sass with these soulmates.

Steal the Sun takes place solely in Faery where Zoey is being introduced to her mother-in-law, Queen Miria, and Dev is coming home as more than a mortal Green Man, having now ascended with a fertility god inside him, Bris. Daniel is an interesting factor as vampires don’t generally enter Faery, but he is Dev’s partner as well. A war is looming between the Seelie and the Unseelie Fae, and Zoey has a heartbreaking prophecy delivered to her – someone she loves will die. Zoey being Zoey will never take that lying down.

Zoey is also in Faery to steal the Blood Stone for Louis Marini, head of the Council and all ’round arsehole. That forms part of a normal job description as thief for Zoey, except this time payment is supposed to be Daniel’s life being spared. That’s also something that is building and (I assume) should come to a conclusion in the next book.

There is also a **trigger warning for this book **SPOILER – Zoey is pregnant with Dev’s baby but there are forces in Faery that do not want her to have the baby so a combination of a hex and herbs make her miscarry. This is not a light topic for women, and their loved ones, who have miscarried or lost a child – no matter the circumstances. It made me ache. It’s only a small section of the overall book but it is an important undercurrent because Daniel and Zoey had a child, a daughter, via a transference box (you have to read the previous books) and they are now acutely aware that Summer is actually theirs because of Daniel’s deepest desires mixed with the magic of the box. Summer is being raised elsewhere and Daniel wants his daughter. That part is not resolved in this book, only their understanding of who she is and their resolve to get her back is.

All of my favourite characters had plenty going on in Faery. I love Neil and I’m glad that bit of bad blood between him and Daniel is now resolved.

Daniel leaned against Neil. He took a deep breath, his eyes tight with strain. “Neil, I am sorry. I didn’t understand what I was doing. Not really. Could you forgive me?” The question was asked in a calm voice but I knew Daniel well. He was worried about the answer.
Neil simply nodded. “I promise I won’t leave like that again. I’ll stay and fight it out with you, but I won’t leave.”

Oh yes, I am totally in love with Bris, the fertility god who cohabits in Devinsheas’ body. I will be so pissed if he

isn’t reunited with Dev again, and therefore Zoey, because Bris is the embodiment of unselfish love – he loves his goddess and cares for the overall happiness and the love within the corporeal triad.

This is my favourite book in the series thus far. I am moving on to the next one shortly, which will clearly have an Arthurian bent. I believe Steal the Night will be the last of the main series before it branches off. I wish that wasn’t happening, I don’t want it to branch off, because these characters could keep on going for some time, in my opinion, and I’d love to keep reading about the MCs and their friends.

Onwards and upwards to Steal the Night. I look forward to where the next book takes them all, although I have huge trepidation as well. Fantastic paranormal/fantasy romance reading. 5 Stars!

I’m seriously loving this cover. You know me and red. 🙂 With that being said, I can see how much you love this series. Every time I read one of your reviews I want to know more about Zoey, Dev, and Daniel. I can’t wait to have time to start reading all about them myself. As for your trigger warning, as a woman who experienced that firsthand, it’s one of the most devastating things a person will ever experience. I’m glad you made note of it and you did it with sensitivity, as you always do. I love the visuals… Read more »

That cover is SO beautiful. I do know you and red. I love red 🙂

The Thieves series has been amazing and there is one more review for me to put up, then I’ll see if I go into the spin-off series.

Yes, miscarriage has to be looked at as a trigger because of the understandable and very real emotional pain and grief associated with it for many women/people. Hugs, my friend xo