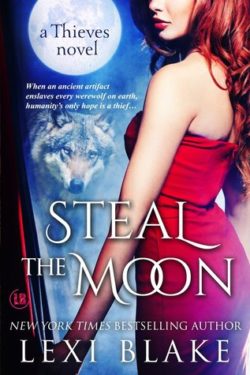 When an ancient artifact enslaves every werewolf on earth, humanity’s only hope is a thief…

Zoey Donovan should be happy. Her love life couldn’t be better, her demonic nemesis is on the run, business is booming, and no one has tried to kill her in seven whole months. But without her best friend to share it with, it all seems a little hollow. Neil, her fabulous furry wingman, is missing and two grumpy werewolf bodyguards have taken his place.

Undaunted by her humorless babysitters, she intends to track Neil down even if it means risking her newfound romantic bliss. But someone else has plans for Zoey, and they don’t intend to play nice. Lucas Halfer is desperate for revenge, and he knows just how to get it.

An ancient Roman legend tells of an artifact that will grant its possessor the power to control all wolves. No one, including Daniel and Dev, believes the Strong Arm of Remus is real but Zoey thinks Halfer might have already located it. With every werewolf pack in North America gathering in Colorado, the demon could enslave an unstoppable army.

To save the day, and possibly the world, Zoey will have to find a way to steal the Strong Arm of Remus from one of the most powerful demons in existence. Then again, impossible is kind of her specialty.

First of all I have to get this off my chest: This book started off roughly for me. I found the strong Zoey I’d come to love in books #1 and #2 was lost, seemingly overrun by the two men in her life – vampire Daniel and fae Dev. I was shitty at their cliquey behaviour and boys club mentality. Even though their motives were borne out of love and meant to protect Zoey from the ubiquitous demon Brixalnax, aka Halfer, they weren’t helping at all. The annoying ‘me man, you woman’ mentality that drove me away from het romance was initially pervasive to an ersatz ménage I happen to be getting right behind.

However, from the 56% mark onwards this book ratcheted up several notches in intensity. The UF/paranormal elements went into overdrive and kick-arse Zoey was back… and I fist pumped. Neil returned to the fold, although that was way too easy. Werewolf Neil, Zoey’s team member and close friend, left because Daniel made a decision to send his new partner, Chad, to the Vampire Council without letting Neil know. Upset, Neil ran away after but when Zoey, the good friend that she is, goes looking for him and finds him seven months later, albeit in a bad situation, he just goes with it and it isn’t discussed again. Neil and Daniel had no moment about it and they should have because they were tight for a long time and Neil was hurting. I’m glad Neil is back because he adds another dimension to the characters in this book and is such a scene-stealer. Anyway, Daniel and Dev got back on track and understood they could not keep the woman they love – a strong, fiercely independent person – back from what she does best – steal artefacts, have some fun, and march to the beat of her own drum. They’re also dropping some of the manly-man shit to move towards something meaningful as a triad with more harmony at it’s core, one where it isn’t just about Zoey, and I’m mighty happy about that.

Daniel sat behind Dev and offered him his wrist. Dev put his mouth to it and took that precious blood. Danny’s eyes closed. It’s pleasurable for a vampire to share blood. It was a big step forward. I watched my boys and couldn’t help but think it was really kind of hot. Neil would love this. It would feed his fantasies for a month. I was having a few fantasies of my own.

“I love you, Zoey Donovan. I would never allow you to do this with another man. I only allow this because he belongs to me, too. Don’t think this lessens my possessiveness or makes you any less my wife.”
I searched his face, trying to understand. “I know, Danny. I didn’t think it did. I love you, too.”

The inclusion of Lee and his brother Zack as extra werewolf muscle aggravated me at first, but I came to admire Lee a great deal and Zack played his part. I imagine Lee will only become more endearing as the next few books progress because he is fiercely respectful of and loyal to Zoey. Dev’s bother and heir to Faery, Declan, is a pompous, annoying arsehole and I’m not sure how I feel about going into Faery with him for the next book because I do not trust him,  although he is good for a laugh or two. However, go in I shall because I am committed to this series and, after having read and enjoyed over thirty books written by Ms Blake/Oak, I do trust the author.

“He’s the best archer in generations. It’s like the weapon is a part of his body. Even so, it’s a small target and we’re a long way away.”
Declan snorted behind us where he had crawled forward to listen in like the sneaky bitch he was. “I could hit that with my eyes closed and the rest of my body engaged in a bit of fornication.”

There is plenty of sex in this book, it nearly tips toward the heavy side of the sex scale. Zoey and Dev are the

headliners for a sex fertility festival to help the entire werewolf population be more fertile and to prosper, it’s one part of an overarching plot within the series. If Daniel can get the werewolves on his side it’s one step closer to be able to wrest control from the current Council. The weres do not trust vampires, but Dev helps with the politics and his ascension at the fertility festival cements Faery in the paranormal mix. Besides, I’m looking forward to a little paranormal bi activity, mind you with the new fertility god, Bris, now inside Dev things are getting, uh, interesting. Let’s see what happens. Daniel had some lasting moments of distress over being a vampire, a monster, not having the children and white picket fence with Zoey, but that seems to be sorted now.

There are some violent scenes in the series as well, Daniel is a vampire and if you piss him off he gets revenge, and 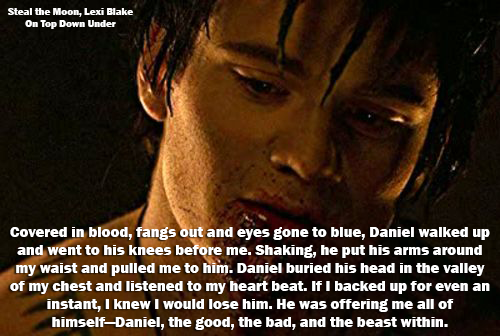 Zoey has her own moments of bloody action, as do the werewolves. Halfer is still stirring up problems and he has his sights set on controlling all weres via a stolen artefact and killing Zoey. The trademark LB/SO moments of laugh-out-loud humour and no one taking themselves too seriously weaves well throughout all these series books too.

Overall, this is another passionate read in the Thieves series by Ms Blake. A paranormal/UF book with a great romance at its heart, one that speaks of acceptance and complexity. It’s a series that stirs emotion – good and bad – and pumps the adrenaline, which I’m sure is going to keep on pumping until the very end. So it’s on to book #4 for me very shortly.

I can tell I’d love Zoey. It’s so rare to find books with kick-ass females. Like you, I’m sure I’d get a bit frustrated with the he-man stuff in the beginning. Great review. I can’t say enough how much I love that butterfly GIF and quote. Beautiful.

Zoey is awesome so I was pissed at the beginning because I love a strong female, a loyal and assertive one. She came back to me and all was right in my world. Lexi Blake kind of writes in a way to get the adrenaline up, whether that be good or bad, there is no in between. I totally respect and appreciate that heart-on-sleeve style of writing.

Thanks, Cindi, I love the butterflies too, they truly are beautiful 🙂