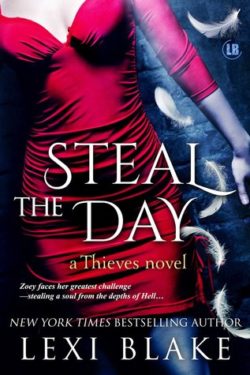 When a member of her crew is dragged to Hell by a demon, Zoey plans the most dangerous heist of her career. With her team at her side, Zoey intends to sneak onto the Hell plane and steal Sarah back.

The job seems impossible until a new client makes them an offer too good to refuse. If she can find an ancient artifact called The Revelation, she can use it to locate an angel who holds Sarah’s redemption in his hands.

Surrounded by warring angels and demons, the greatest threat may come from one of her own. Torn between her Fae lover and the vampire who has always held her heart, Zoey finds that she and Dev are trapped in Daniel’s web of secrets and it may be Zoey who has to pay the ultimate price.

Don’t let the blurb fool you, there isn’t a lot of action on the Hell plane in this instalment. They get there, but most of this book is spent on the Earth plane and concentrates on new vampires surfacing suddenly in Dallas, not an easy thing given the way vampires are created in this book. Zoey is also needing to find a new paying (theft) gig for her crew, which fortuitously leads her into breaking Sarah out of Hell. A bit of time is spent on the Revelation, aptly named artefact that it is, and those behind it who are both good and bad. There’s the evolving politics of the Vampire Council now they have their Nex Apparatus – Daniel’s vampiric designation, and Zoey, his companion – another designation for a rare breed of partner who is pretty much like vampire crack. Daniel is secretly going about some business of his own, and none too stealthily as it turns out. Luckily Dev, Zoey’s lover, is a royal fae from the seelie court so he knows paranormal politics, and in the Earth realm he is a wealthy man through business, including owning successful clubs catering to the paranormal world.

Lexi Blake knows how to give her primary demographic what they want – a strong woman and two smoking hot men who are gagging for her. Her men are Alpha, her friends are fun, and her enemies, whilst powerful, are more or less good natured somewhat slapstick caricatures of completely evil antagonists, and as always with this author it works. The sex is pretty hot, one scene in particular; when Daniel bites Dev and Zoey during a ménage and the fertility Green Man mojo rolls off Dev, it’s hot… hot… hot,  although I still maintain this series is generally more New Adult than adult.

There is a strong urban fantasy/paranormal theme weaving throughout with Brixalnax, a demon from book one, having kidnapped Zoey Wharton’s bestie, witch, and fellow thief, Sarah, and taken her to the Hell plane. Angels contract Zoey to find one of their own whose absence creates a lack of balance. Meanwhile, Daniel, Zoey’s first love, first everything, is still on the outer with Zoey at the beginning of Steal the Day and Dev is most definitely in – but they both chop and change within Zoey’s emotional spectrum.

Neil, Zoey’s other bestie and all around out and proud gay werewolf, continues to be funny, trustworthy and naughty. I adore him.

I struggled to find anything to say. “Would you believe we were all just really tired?”
Neil took a deep inhale and looked at me with an amused light in his eyes. “Nope. The nose doesn’t lie. Then there are all the condom wrappers. It’s an impressive collection. Zoey’s been a very bad girl.”
…

“You want to stop two really hot guys from putting their hands all over each other and maybe getting a little bloody and ripping some clothes off in the confusion?”
Chad stopped and smiled devilishly, proving that even blood-oathed vampires had priorities. “Put like that it seems like a stupid thing to do.”

These characters remind me of a younger Jack Barnes, Sam Fleetwood and Abby Moore – aka Abby Barnes-Fleetwood, the first and most important triad, in my opinion, from the contemporary Texas Sirens series written by Ms Blake’s alt pen name, Sophie Oak. The difference is that Jack and Sam were friends for years before Abby came into their life. In this series the two main men are opposing one another for Zoey’s love and affection, Zoey knew and loved Daniel first, but their relationship appears to be going down the same path of Sam, Jack and Abby. I want the love triangle to be done with. I want Zoey to stop vacillating between the two men and whining, hand-to-forehead, about how Daniel doesn’t really love her, he’s only addicted to her, or Dev is only playing with her nicely but purely sexually. Everyone loves Zoey, even Daniel’s vampire mentor, Marcus, whom I happen to think is an underutilised secondary character, adores her. Lucifer, pissed-off Brix, and Stewart, a mischievous and pretty hilarious demon also from book #1, may be irritated by her at times but, hey, she’s Zoey.

One thing I have to mention that bothers me, it can’t change anything as these books have long since been written, but I wish Ms Blake would not have two sexual orientations – gay and straight. This equals bi-erasure (we’ll just stick with bi here).

“Don’t leave me waiting too long because two dudes in bed gets gay after a while, even if we are waiting for a girl.”

Ms Blake/Oak does take her characters into bisexual ménages in other books and given she is a het romance writer I’m glad she’s open to that, and I love her overall writing, I just wish the word bisexual appeared in this series, but maybe it does later.

Overall, this book is fun, the humour is often laugh out loud funny, and it’s light whilst also managing to be quite emotional. You can’t help but feel deeply for the main characters and their love, their plight.  I have a connection to several of the characters, primary and secondary.

I know I may say that Zoey whinges about love, it’s part of the deal of loving two men who aren’t necessarily on the same page except for loving Zoey, but she is a badass in her profession, and also as loyal as loyal can be as a friend, one of my favourite kinds of characters, and she does not wait for a man to ride in and save her, she often saves them. I like that too.

“Any way I can talk you out of it?”
“None.”
He slapped the gun in my hand and before that no good, backwoods, homophobic, raping son of a bitch had a chance to move, I aimed and fired.

I’ll have a break and then I’ll be back to read the next in the series and hope this ménage becomes a true and free (and bi) triad, and that the action and adventure keeps on coming like they have so far. This is book # 2 in a six or so book series that I hope to finish this year, time permitting. I know this site is mostly (LGBT) gay romance, fiction etc., but ultimately I enjoy good reading. If you also genuinely like solid UF and paranormal romance with humour, strong action and flawed but addictive characters, irrespective of the romance pairing or gender, then I highly recommend the books I’ve read so far in the Thieves series. 4 Stars!

This looks like a really good series. I love when females are written as strong and perfectly capable of saving the day without having to have a man do it for her. The main reason I stopped reading het romance is because a lot of the females started out strong but turned to mush when a hot guy came into the picture. I’m not a fan of love triangles but I’m intrigued enough to want to know what happens next. Just from reading your review it’s obvious the characters are bi so I can see why the ‘two orientations’ bugged… Read more »

It is a good series, Cindi. Fun and light but also with depth, and interesting characters you can get behind.

Me too, I opted out of het romance because of TSTL heroines but Lexi Blake/Sophie Oak tends to write them with chutzpa and there is a reality to them. I’ve known what is essentially the core essence of some of these women over the years. I also need to see how things turn our for Zoey and Daniel and Devinshea 🙂