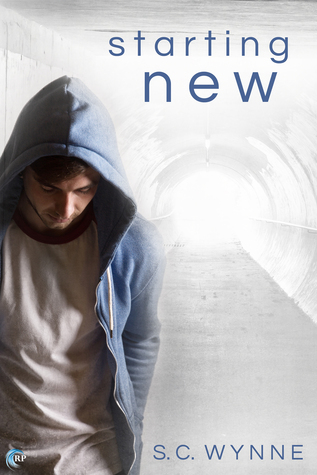 Life hasn’t been good to Francis Murphy. He’s survived twenty-one years of homelessness by hooking and taking handouts where he can find them. When the local shelter is vandalized, he’s forced to seek food at the Grace and Light Church, where he runs into the pastor’s son, Randy.

Randy Wright believes the best in others. He’s immediately drawn to Francis, even though Francis is hardened and wary. When Francis is attacked by one of his johns, Randy and his family take him in and offer him temporary work. Randy always thought he was straight, but something about Francis has him yearning for more than just friendship, and realizing he might be bisexual.

Francis is attracted to Randy too, and Randy and his parents say they’ve always believed in gay rights. But talk is cheap. What are the odds that these Christian parents will remain open-minded when it’s their own son in a relationship with another man?

Clearly I’ve gone to rent boy reading obsession land. The last two books I’ve read have that theme and both are through Riptide. They’re also completely different. Where Rented Heart is very steamy, and more gritty – in the sense that the rent boy still has sex with others, Starting New is not so much about the steamy and erotic as it is about a message, some humour, about a second chance in life, a new beginning. It’s about two guys from different backgrounds, one religious one from the streets, finding love and hope, and one of the MCs having a kind of epiphany about his sexual orientation.

Francis has been working the streets as a hooker for years even though he’s only twenty one. His 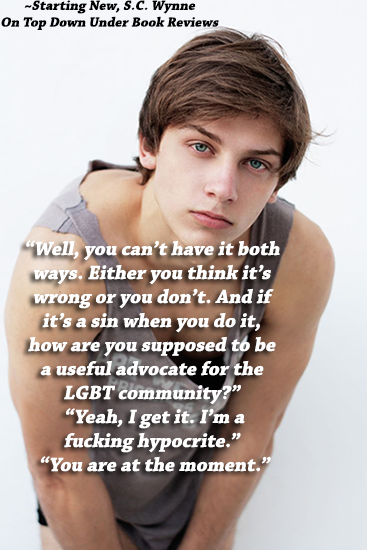 usual source of shelter and food burned down so he ends up at the local church hall. Even though Francis doesn’t trust religious types, they’re always trying to convert you, they look down there noses at people like him, he’s hungry and they are offering quality baked goods. The woman there knows who he is. Patricia is the reverend’s wife and she’s seen Francis around and about. This church is keen on having an inclusive attitude, which includes the LGBTQ community, so Patricia attempts to get Francis talking and engaged – he’s young, around the same age as her son, Randy. Being a hooker and on the streets isn’t ideal and she wants to help. Randy is also well and truly on board with Francis, trying to get him to open up and stay there for a while. Randy is well meaning, caring, and also incredibly inquisitive.

Francis is not buying their inclusive, no strings attached talk. He just needs some food and to get back to work, which means out on the street. He has a fairly long standing client in Baxter and Francis wants to meet up with him after he’s eaten and freshened up. Baxter usually pays for an extra night in a hotel when he’s in town so Francis can stay longer, and Francis needs to keep regulars happy if he’s going to keep working. He takes off but not long after an event occurs, and Francis finds himself back outside the church. Long story short, the Wrights need some young hands for a rebuild project, Francis could help in return for room and board. It would keep him off the streets and in a better environment and the Wrights would get a shelter built as well. It’s a seeming win-win for them.

Starting New is a push-pull between Francis not trusting the Wright’s motives or religion. Not 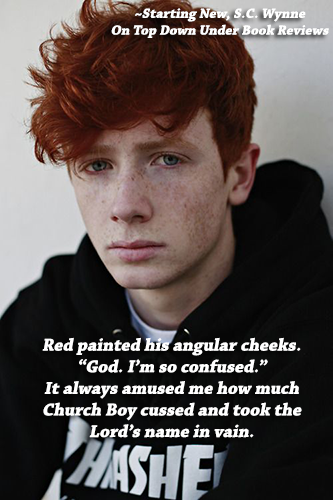 believing that he can get another chance at life, let alone find love. It’s also about Randy discovering that he’s attracted to Francis when he’s only been attracted to females before. I’m pleased there is no bi erasure in this book because Randy has only been with a female before, so he’s confused. He doesn’t want to think he’s gay because it flies in the face of religious beliefs, inclusive attitude or not. Francis does talk with Randy about the possibility he’s bi a couple of times, albeit briefly, which I appreciated. The humour is good. The messages good. The heart of the storytelling nice. Although for a part of the story I struggled with Randy and Francis – Randy would get so snippy about things, Francis would be stubborn. So, for a while, they’d bounce annoyingly off one another. Then it settled and a lot of threads came together, including Randy and Francis, and I enjoyed their friendship and growing/newfound relationship.

One of the main reasons I pick up a rent boy story is for the steam. That’s completely missing here. I didn’t like the lack of sex, I didn’t like the lack of intense chemistry because of that. This could have been a YA book, but it isn’t. It’s an adult contemporary romance rent boy story with a preacher’s son falling for a hooker. I mean, come on, that storyline is ripe for the slowest burn. So that was a bummer for this pervy reader, but I got involved in the overall story, and I’ve rated accordingly.

In the wash-up, I enjoyed the second chances Francis found in this story, he deserved happiness. That Randy found comfort in who he is and who he chooses to love. That Randy’s family were who they said they were. I liked that the author showed the Wright’s struggle, that they knew they had some shortcomings when it stared them in the face and they did something about it. I’d like to see religion being open, caring and inclusive. I totally enjoyed the sense of family that evolved – I admit I love people taking in others, offering them a chance and a sense of family and unconditional love and support. I wish more young people had that. All of that is contained within the well named Starting New. Recommended for readers who like a second chances rent boy story without a lot of steam, but one that has meaning, humour, heart, and a happy ending. 3.5 Stars!

ARC provided by the publisher in return for an honest review

You know my love of rent boy stories and I do love a book about second chances. I feel like I’d be drawn to Francis. Maybe it’s my need to go into mom mode when I see characters like him. 🙂 I’d have the same niggle you had, I believe.

Great review. I can tell it’s a very nice story.

I agree, mum mode would come out in you, so look out uncaring, bad people, lol

It was a nice story, I do love to see people find happiness, but I did miss the trope’s usual steam.