Speak With the Dead by Jacqueline Rohrbach 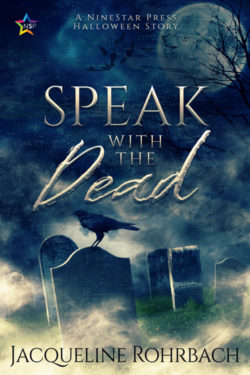 Clarence and Bryant thought an all expense trip to visit family in Wisconsin would offer a pleasant break from the doldrums of Arizona life. There was, however, a catch: Bryant’s sister bought a room where you could supposedly see and speak to the dead. Assuming the entire thing is a hoax—sea monkeys for rich people—Bryant and Clarence travel east on their family’s dime.

A surprise awaits them. The room works as advertised, allowing the human eye access to the spirit world, and the ghost inside has a thing or two to teach them about the afterlife.

This is a terrific novella for Halloween. Good for any time you feel like something with horror and humour because it definitely succeeds at delivering both.

Bryant and his husband Clarence have been invited to Bryant’s sister and brother in law’s house in Wisconsin. Neither of them like Betty Anne or Mark – they’re a pair of irritating and snobby dicks. But family is family and the new ghost room that they’ve added to their house is something that Bryant and Clarence can both probably get a good laugh over. It’s interesting if nothing else. When Bryant’s Grammy says she can a) bake them a Grammy Slam, her speciality, and b) look after their dog Derkie while they’re away, it’s settled.

Mark and Betty Anne, please don’t call her Betty, are horrible hosts who like to rub their wealth in people’s faces, it doesn’t matter that it’s family. The ghost room and ghost cost them about half a million dollars. Great accessory for those with terminal ennui. They made sure to buy a ghost of a young girl, Amy, who died of cancer. Oh, and could the salesman throw in a couple of more ghost kids, you know, for the money they’re paying? Such a charming pair. The shonky salesman, who certainly suits his clientele, assures them that there’ll be no issues with ghosts. I mean, they’ve had a couple of things go wrong when a terrorist or anti-Capser ghost invades their nice, peaceable ghosts. Very rare. But that wont happen to terrific people like Mark and Betty Anne. Anyway, they’ve bought a quiet, young ghost to add to their household – so you just know that the ghost shit is going to hit the human fan.

Because this is a novella I can’t say much about the plot, it won’t make a whole heap of sense without having read it anyway. But I liked Bryant and Clarence. Clarence is a Star Trek fan and overall geek. Bryant always calls the show Star Track and they have a laugh. They’re a pair of funny, snarky married guys with a sense of humour. I really enjoyed them as main characters, especially since they add balance to the horror and Mark and Betty Anne. The book hits some intense notes in horror, it isn’t for the totally squeamish. This author has an ability to write humour intermingled with horror really well. The Worst Werewolf was the same. When that book was not being funny, which it was good at, it could be quite gruesome, which it was also good at, and the same goes for Speak with the Dead. I loved good old Grammy, I want to be her when I grow up. Betty Anne and Mark also made me laugh. Not because either of would them like that. Nope. It’s because they were well written caricatures of some pretentious arseholes we’ve all encountered at some time in our lives – definitely some relatives. Besides, they were kind of our red shirts here – cue that Star Track show now.

The first part of the book concentrates on how Betty Anne and Mark came to buy the ghost room, who they are as people.  I mean, Betty Anne makes sure she gives the guys the worst excuse for a bedroom for them to stay in while they’re there.

The second half still has humour at its core, but the horror centred around Betty Anne and Mark’s home, Amy the ghost, is ramped up until there is a build to a conclusion. There is a little play on horror tropes in movies, how people always choose the worst options.

“Come inside,” Amy’s voice twisted inside them. Terrified, Bryant groaned. “It’s okay, Bryant. Don’t freak out and make bad choices. That’s what she wants. Stick next to me,” Clarence told him.

While you might feel sorry for Amy in the beginning, she makes sure you know she’s more than capable of creating menace and havoc. And the book definitely goes for the jugular as it progresses.

Here’s one more dig at Betty Anne before I finish, the sister we all don’t want to have, who provides us with plenty of entertainment. Along with Bryant and Clarence’s straightforward opinion of her, and I wholeheartedly agree…

I really enjoyed this novella. Humour and horror and Halloween. Some fun and some ghosts with teeth. Speak with the Dead is not a long e-book at 105 pages, but it’s well written, well executed and entertaining. It finished a bit quickly, and I would have liked some more at the end, but that’s it and it’s not big deal. I continue to enjoy Ms Rohrbach’s writing and look forward to her next book. 4 Stars!

This covers just about everything I love in a book. There’s horror, humor, a child, a ghost (that just happens to BE the child), and a cute couple. I know I’d love this. I read a lot of gore so that part won’t bother me. I will say that I hope Betty – I mean BETTY ANNE – gets hers. Yes, we all know people like her and her husband. I have a few of those in my family as well. 🙂

Great review. I love the quotes and visuals.

Yes, good old Betty ANNE, for god’s sake don’t forget that second part, ha ha. And we must not forget her horrid hubby, Mark. They were great to bounce things off. Bryant and Clarence were fun, even in some dire times they had humour. I have no doubt you would enjoy this novella.

Thanks, Cindi, I had fun with the visuals 🙂