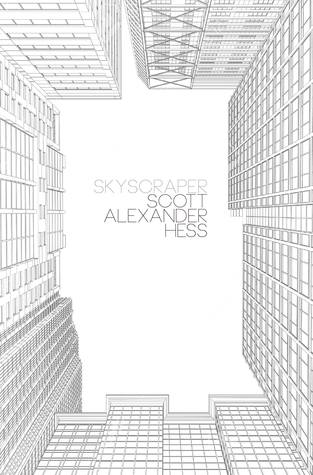 Set in modern day Manhattan, Skyscraper is the story of Atticus, a down on his luck architect who stumbles into an S&M bar and meets a young man who changes the direction of his life. What begins as a random pick-up evolves into an intense game of sexual domination as Atticus finds himself wildly invigorated both as a man and an architect.

As his new relationship deepens, his creativity simultaneously catches fire and he lands a prime architectural job at his firm designing a bold new high rise tower. Soon his two worlds collide as the novel takes a Kafkian turn and the thin line between reality and fantasy, pleasure and pain threatens to explode.

Atticus is an architect who works at his friend’s firm, Colliers. Darrin, his boss, asks Atticus to Peaches one evening, a local bar with blonde, busty strippers Darrin is so fond of, and Atticus is all but convinced it’s because Darrin will ask him to leave. He knows he’s stale and staying at the firm is the Princeton and moneyed old boys’ network simply alive and kicking. He’s surprised when Darrin lets him know they’re going to pitch to a big developer for a skyscraper project in Mexico City. Atticus will be one of the people putting a design up for selection. He’ll pitch against Higgins, an up and coming architect at Colliers. While Atticus is surprised he’s also nervous. He once had great passion for architecture but now it’s buried under an avalanche of personal doubt and ennui. However, this is a big potential project and an even bigger potential client.

Atticus leaves Peaches because, unlike Darrin, he is not into females, into strippers with 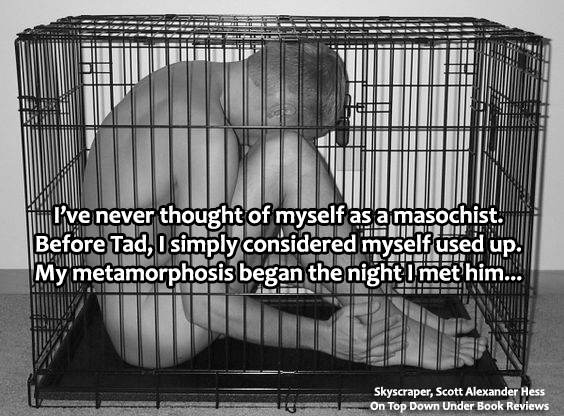 breasts, although he sees the design and symmetry in them. He heads off to a gay bar. It’s here he stumbles across a younger man, Tad, who is rough and tumble and enigmatic, all hard, lean lines with inspiring tattoos. Someone who is willing to take control of Atticus. By take control I mean be very physical with him – hitting him, causing bloodied lips, making him puppy play, choking him, caging him. The S&M taking place over weeks and in different places, some of them murky. All of it thrills Atticus and inspires him. He invites Tad to a formal dinner regarding the Mexico City Wolfe project, and while he isn’t sure how Tad will fit in, he doesn’t expect some utterances and an underswell that is set free.

I’m a meaty reviewer by nature. I find it hard to not get to the essence of a book in my reviews, but if I discuss it I basically tell this story. I would definitely take away the suspenseful, atmospheric elements of the book, so no more plot.

Things that did and didn’t grab me –

I’d hardly call Atticus down on his luck, as does the blurb. Stale, yes. Somewhat jaded, sure. At thirty nine he is more than financially comfortable. He has a place in Manhattan. He is the product of a very wealthy family, complete with a bequeathed trust fund. He has an Ivy League education behind him and works with his old school – rah rah! –  best friend.  Even if he was kicked out of the company, you know Atticus would be fine.

The writing of Skyscraper is polished and elegant. It’s stripped back but perfectly descriptive at the same time. Time intertwines and flows beautifully. Body language is well portrayed, as is mood and eroticism. There is no actual on-page sex, per se, but it’s highly sensual and should  appeal to people who like well written suggestive words and actions. Along with wealth, power and kink.

The author has a perfect way of looking at the past while in a current event. It’s clever

because there aren’t any clunky, info dumpish, boring flashback pages or chapters in the author’s books. This is how you do it.

I didn’t mind Atticus. I can’t say more than I kind of liked him because the style of writing tends to deliberately keep you at arms length, always observing but never quite allowing you fully inside. It was perfect for the story. On a couple of occasions I personally felt like I inched in but – spoilers – I cant say when.

Because I am a character obsessive, I’ll add that the majority of the characters in this book are not my people. Their way of thinking is not mine. I know them – pretentious, self-absorbed, old-moneyed types. However, that is the idea. So I actually cannot fault the novella for that whatsoever. In spite of not gelling with most of them, I thought it was perfectly apt, which speaks about the quality of writing.

Skyscraper is suspenseful and atmospheric. The influence Tad has on Atticus is brutal but sensual and exciting. The past and the present tangling well, building momentum as the novella progresses to where you want to fly through the pages.

It was my sketches of that day, but more, it was my own structure born more 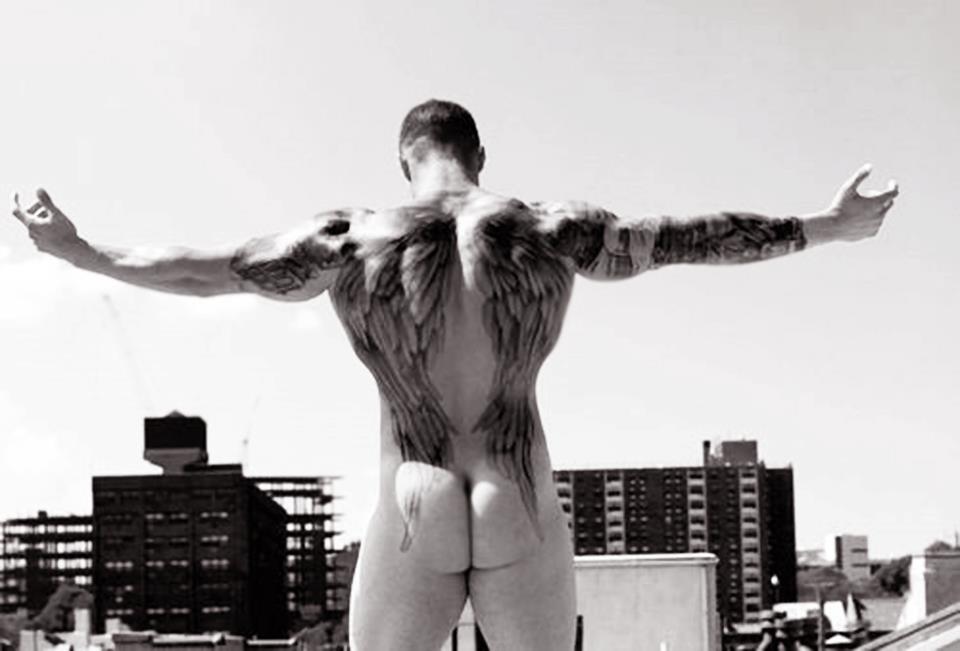 fully, rising sluggishly, all edges and shards incorrectly bold and divinely erratic, obscene and subversive. I viewed my mammoth thing of beauty as it rose higher, and I heard Tad at my ear, whispering over and over as religion set upon me, a blaze of inspiration and clarity of construction that would not be put down, as Tad said again, “You are mine,” and I ejaculated, finally gasping for air as he released me, and let me fall to the ground.

Butterflies, the sky and clouds juxtaposed against sadism, masochism, Tads’ body and tattoos and building’s sleek architecture is sharp and sublime.

For me, the big point – who really is the dominant person? Or thing? And, you know, it is a real talking point for me, but my lips are sealed.

While there is a… quasi-romance at the heart of Skyscraper I’m rather loathe to call it that. I’m more inclined to say obsession, a favourite theme of mine, and an awakening of senses.

The ending is good if not abrupt. Honestly, it suits the book, I get the statement when it stops, but I didn’t quite want it to end at that juncture.

There are no two ways about it, Scott Alexander Hess writes beautifully. His prose is imaginative and refined, always on point for the premise. But I’ve already noted that previously on this blog in my review of The Butcher’s Sons. Kirkus and Rainbow Awards may have given mention to that same book, but it was also one of my Books of the Year in 2015. If you want to read a well written piece of gay fiction, something where you feel the tension and fairly cloak yourself in the atmosphere, the literary eroticism, complete with intriguing characters, then I can highly recommend Skyscraper. 4.5 Stars!

I remember your love for The Butchers Sons so I’m not surprised you enjoyed Skyscraper as well. I can tell that the characters wouldn’t be ‘my people’ too but it still looks like the author did a fantastic job with the story.

Great review. I love the visuals and the quotes you used.