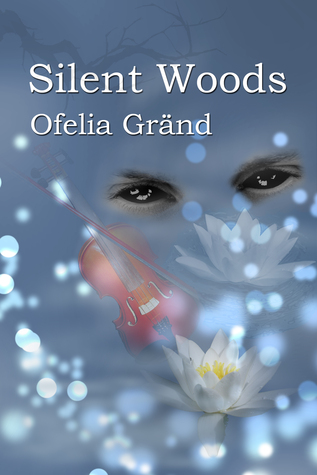 When Daniel’s husband Anders takes the family camping in the woods, Daniel can’t shake the feeling that something isn’t right.

He almost dismisses his fears as nothing more than his dislike of the great outdoors, but when the couple’s five-year-old son Axel goes missing, his worst fears are confirmed.

A search party reveals something more sinister than either man could ever have dreamed of encountering in the woods. Can they find Axel and save him before it’s too late?

Daniel and Anders have been together for thirteen years, they have two adopted children who are biological – Axel, who is five, and Maja, who is three. The author painted family life well, normally – nothing special about two dads with their loving nuclear family – thank you to the author. The children behave like typical children of their respective ages. As for the dads, Anders is the outdoors type, he likes to take the children for walks in nature, Daniel couldn’t be more different, he doesn’t even like the garden all that much. But Anders is on leave for two weeks and he wants to go away camping. He knows Daniel isn’t too keen, but he’s agreed to go anyway, so Anders makes a concession of the trip only being two days.

The beginning shows you how the two dads differ and even though the story is through Daniel’s eyes, Anders is very clear to the reader. Though Daniel is the physically bigger man, Anders spoons him of a night and always makes him feel safe and secure. Anders is a bit more of the fun dad. Daniel is the

worrier. Daniel loves the city. Anders, not so much. Anders is the romantic partner. Although he won’t say ‘I love you’  often, he shows that he loves Daniel with the little things he does – remembering anniversaries, buying thoughtful gifts and making sure that even when they are at a camp ground, later that night there is a rug, candles and wine for the two of them for adult time. If Daniel is worried about being out in the woods with their two young children, Anders is so laid back and confident, Daniel trusts all will be well.

The first day is pretty nice, although Daniel is ill at ease with how quiet the woods seem. The children are excited about camping and have had a good day. Daniel gets to have sexy-time with Anders which makes him happy. But the next day things change. In the blink of an eye (it really is so likely) Axel has disappeared and neither man can find him. Daniel is in meltdown with Anders consoling him but pretty soon, after hours of time missing, Anders 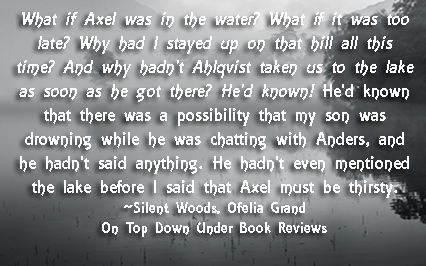 starts to feel devastated and responsible. The police are called and the officer in charge, Ahlqvist, seems off and not able to look either man in the eye. Daniel just knows he’s holding back important information. He asks some unusual questions, and Daniel smells something fishy. After a bit of hassling by Daniel, Ahlqvist admits to a number of drownings in a nearby lake, always on a Thursday, and today is Thursday. One woman survived and couldn’t remember much but what she did remember lends itself to the tale of the Neck. The Neck is one of those folk tales that every country has and Daniel finds it hard to believe the Neck is real, but he is worried sick about his missing son.

I won’t say much more as it is only sixty pages and it is better reading it. The tension builds pretty well. The feeling of the parents are genuine and as a parent myself it’s your worst nightmare come true having a child go missing. It is also always interesting to read a book set in a different country, this one is set in Sweden, and I enjoyed the feel and the lore.

Silent Woods is another LGBT novella that is just a little bit different in the genre, and it’s nice to read them. While it could have been a bit more creepy, it is the kind of book that allows itself to be read by those who might otherwise find a novella like this overwhelmingly dark or scary. It is not meant to be a horror story, more contemporary mythical. I do have romance in the tags but it isn’t really a romance book; however the dads, Daniel and Anders, are very much in love and they do get together for a bit of lovin’ on the trip away the first night. The children are written age appropriately, although not a lot of page time is given to them, it’s more about setting the story and the worry about the missing child. How the dads are feeling. How you would feel. About the paranormal/folkloric elements. If you like a bit of mythical with your LGBT reading and are not expecting typical MM romance – a child is missing – then I recommend Silent Woods. Oh yes, that cover is beautiful and fits the story perfectly. 4 Stars!

Previous post
Just What The Truth Is (Home #5), Cardeno C
Next post
The One Who Saves Me by Cardeno C

It looks like a good story. I have to read it now to see how things play out.

The cover is perfect, Cindi. Everything on there is just right for the story. I think you would identify with this novella, but I know you read more horror based than this one. Still, the missing child component is a nightmare scenario.