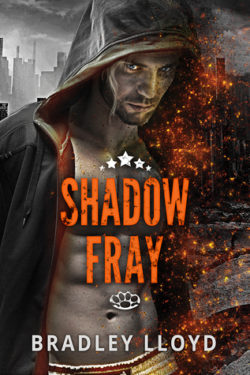 No one knows what calamity poisoned the earth and decimated the human population, but living close to the toxic ground means illness and death. Justin is determined to keep his twin sister and younger brother from that fate—no matter what he has to do. To earn enough to keep his family safe in a high-rise, Justin enlists in a deadly sport called Shadow Fray. He quickly finds himself in over his head, especially when he is scheduled to face the most dangerous player.

Hale—who competes as Black Jim—knows he won’t be on top forever, despite his skills. He fights for a better life for his daughter, but his time is running out as Shadow Fray becomes increasingly lethal. Something about the newest fighter intrigues him, but does he dare defy his masters to investigate? Justin and Hale will clash in the ring, while beyond it the powerful elite and the crumbling world seem determined to keep them apart. If they can find common ground, they might have a chance to fight for their futures.

Shadow Fray is book one of a new dystopian style series and also the name of a new craze that’s been gathering momentum over the last few years on new earth. It also makes for the basis of the main storyline, Shadow Frays are brutal, no holds barred hand to hand combat fights. There is however strict regulations to these highly illegal fights and one unusual one, there is no crowd whatsoever. Only the two fighters and their respective handlers know the location of the new arena where the fight will occur. No killing to the death is permitted and absolutely no weapons. They do however have up to fifty camera’s recording their every move from every angle possible, streaming to the internet.

The novel is set one hundred years after what the new world now refer to as the thinning. One hundred years ago Earth had been ravaged by plague after a flu pandemic, which also included a huge rise in the ocean levels. No one has bothered to figure out exactly what happened or if they did, the remaining population hasn’t been informed. Everyone might be immune to all the diseases now but whatever caused it to happen also poisoned the very earth and turned it toxic.

People very quickly learnt that it was no longer viable to live on the ground in homes as ground sickness began turning people crazy and it eventually kills them. So everyone lives in high rise apartments and old skyscrapers. They’ve determined that if you manage to keep off the ground for twelve hours out of the day that you won’t get sick. This goes for pregnant women too, women are revered as there is substantially less women than men, but fertility rates are very low. Homosexuality is now illegal again and if caught it’s a literal death sentence as you’re labelled a non-breeder. I initially found this quite ridiculous but the author makes it work somehow.

Bradley Lloyd hasn’t made this book all about fighting and has also managed to incorporate a great balance of powerful family values. Family is not blood relatives in this world for everyone. Then he’s thrown in action, suspense, mystique and romance to produce a very well written book with excellent characters and intriguing sub-plots. They are all pulled together really well and it makes for a good read. I must admit I was expecting a variation on fight club but I was proven wrong very quickly.

As the old cities of New York and LA are no longer, the remainder of what was once The US is now run by Chicago in the Mid-West. The Great Lakes are considered the cleanest water supply in the world now. Although Chicago is running the country, the new government has way too many weaponised drones there too keep the peace so somewhere nearby is needed for these fights or Fray’s to take place. Although they happen all over the country the focal point for them is in Milwaukee. Which is also not too far from Chicago and known as Bruise City or Killwaukee.

People who survived and had knowledge of any form of tech, managed to pass on what they knew to keep transport running, from motorcycles, cars, trucks and trains. They also managed to keep the infrastructure of mobile phones up and running, old TV shows broadcasting, internet and electricity. Food is grown in specialised factories and the upper class or uppers have made their buildings one hundred percent self sufficient. Some of these people are also known as shutters. They have literally shut themselves in their building for life.

It’s a hard world though and work is scarce, if you lose your job you lose your home and livelihood. You’re then thrown into the streets and slowly succumb to ground sickness. Everyone is literally fighting for their lives both literally and figuratively now. A select few Shadow Fray fighters are driven into it to help keep their families future secure. Its now the most popular past time.  A nasty incident during the opening fight scene looks like it might have changed the game forever. The online stats come rolling in and it reaches five hundred thousand hits, which is equal to half of the worlds remaining population.

This book revolves around two families and establishes a solid base for book one of a series. It’s very well written and has laid a solid foundation to easily keep building from. The main storyline and some of its sub-plots come together wonderfully and result in a medium sized cliffhanger, which I personally don’t like but I think it’s OK to do for a first novel.

The main characters are surrounded by very strong and prominent secondary characters that are almost as heavily involved in this book at times. They’re all brilliant too and it helps you to really understand just how important family is in this new world, family is not defined by blood relations anymore. This really pulls you in to help you grasp the construct of the world Bradley Lloyd has created, it’s one dystopian land that’s really not that different from our own because it’s done so well. It’s also not so far over the top that it couldn’t become a future reality of sorts. It brings you in to meet two families that are in similar but different situations.

Justin is twenty three and although he’s huge, he’s also a quiet gentle giant. Along with his twin sister and smart but mute younger brother that he helped raise, he’ll do anything to give them a better life. It’s now his turn to take up the mantle and provide for the family as his sister is now in a great and secure job. What she had to do to get them through that nearly broke Justin’s heart. An old and elderly family friend who fled to Denver for protection for around five years has now returned. He holds secrets that Justin desperately needs to know about and Justin is surprised that he knows literally everything that they’ve endured while he was gone. He also owns the penthouse of their high rise. After Justin’s false start into Shadow Fray a year ago he’s back and let’s Justin know that he knows everything that’s transpired. Justin idolises another fighter, the best they’ve ever seen, one that never loses. Known as Black Jim due to the black face paint he wears during his fights, Justin watches each fight literally hundreds of times. He is also afraid and disturbed at how much this mysterious man turns him on.

Hale is Black Jim and he comes with a dark past. After his best friend dragged him out of the downward spiral of drink and drugs which killed his wife, he gave up his daughter to be raised by his best friend and his partner, who’s his dead wife’s sister. She can never know this and that allows him to visit her, so he fights for her to ensure she has a good life. Black Jim is no spring chicken though, in his mid thirties now, he’s thinking about getting out of fighting forever. Especially after what happened after Justin’s returning fight and the disturbing attention it garnered.

We don’t get to find out anything about the mysterious people or organisation that run Shadow Fray, known as the Shadow Masters. After a chain of nasty events end up landing Justin with the most hated and notorious handler, Scarecrow, Justin is forced in his second fight to do something that goes against every fibre of his being. Going against the shadow masters gets you killed, but as Justin enters his second fight he comes face to face with Black Jim. His panic at seeing him has nothing to do about the fight but what Justin has been ordered to do to him. With quick thinking and penetrating expressive eyes the fight becomes one of crackling sexual attraction. Black Jim can see the terror in the kid’s eyes, but once Justin manages to show Black Jim what he has in store for him, Black Jim neutralises the problem. He comes face to face with his most formidable opponent to date and notices that the fear in Justin’s eyes is long gone. Shadow Fray fans are then subjected to the best fight ever seen and no one is the wiser.

Black Jim’s handler and best friend quickly figure out afterwards that the kid is in trouble and decide to free him from the clutches of Scarecrow. They just can’t find him though, until Black Jim gets a mysterious clue which leads to Justin but he has no idea who planted that clue on him. This book then becomes one of the most sexually charged and frustrating reads ever. I might have written a lot but I’d like to think I’ve not given anything away. The book itself doesn’t either which keeps the momentum firing along for book two.

It’s a dark and mysterious read but I think it’s going to get a lot darker. I also like the fact that while I felt like it was all about the fights, I realised that the way it’s written creates this distraction to everything else that’s subtly going on in the background. There are so many layers to this book that I’m eagerly awaiting the next one and I’m not a fan of really malicious violence. It’s funny how I can read about it in literally every genre except for a contemporary setting, but a couple of times during this book I forgot it was a dystopian world, albeit very briefly.

Thanks for the great review, Paul. Based on your review I’m putting Shadow Fray on my TBR list. It’s so hard to find quality gay/queer dystopian books.

I also love the cover 🙂

Thanks Kazza, it’s a great read and the coming series has the potential to really take off. There were loads of unresolved sub-plots which gives the author so much to work with in the future.

To second what Kazza said, thank you for the great review, Paul. It is very hard to find good quality gay dystopian books. This looks really good and like a nice start to a series.