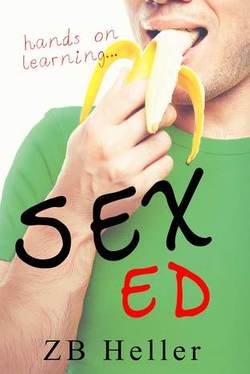 Jaxson Dane is harboring a secret.

Not the fact that he’s a geeky comic book lover, or that he secretly draws his own comic, Bunny Fu Ninja Warrior. It’s not even classified information that he’s out and proud!

His secret is the shame that he’s a twenty-three-year-old virgin.

Jaxson isn’t waiting for marriage or even afraid of taking that step, he just hasn’t found the one guy who will accept all of his adorkable qualities. Due to an unfortunate mishap with a self-pleasuring apparatus and his favorite appendage, Jaxson meets Tyler Mason. The emerald-green-eyed nurse is a witness to the mortifying incident, leaving Jaxon both grateful and disappointed in their one-time meeting.

And then Tyler somehow shows up at Jaxon’s family dinner.

The very dinner at which Jaxson’s hidden virginity is revealed to everyone, including the captivating nurse.

Even though he secretly found the ER situation hilarious, Tyler is also able to look past it to see Jaxson’s genuine nature and is drawn to the charming and hapless comic book artist. He’s tempted to pursue the inexperienced Jaxson, but a recent and life-altering decision puts a damper on his wants and desires. However, the more time they spent together, the more willing he is to take the risk of juggling his new commitments and winning Jaxon’s affections.

A large, insane, and meddlesome family, two prying co-workers, and a sexy nurse are all trying to give Jaxson a crash course in Sex Ed. Will he pass?

After the last book I read I wanted something that was light and would make me laugh. A quick search for gay humor on Amazon and I came across Sex Ed. I took a chance on an author I’d never read before and ended up being pleasantly surprised.

It was a small gift to myself to say “Hey, great job at being single and not having an ass to stick a dick in.”

He’s this close when he experiences the worst pain of his life. The toy has clamped down on his penis and he can’t get it off. In a panic, he calls for help. That help turns out to be his twin sister, Sophie, and his best friend, Ethan. A hospital visit is in order – for both Jaxson and Ethan. When Ethan tried to help remove the stuck sex toy the pain had Jaxson lashing out and punching Ethan in the nose.

At the hospital, Jaxson is mortified when his nurse, Tyler, turns out to be a hottie. The last thing Jax needs is an erection – stuck sex toy, remember? – but one glance at Tyler and he can’t control it. Eventually a doctor comes in and Jax is mercifully knocked out so the Jackhammer can be surgically removed with only minimal damage to his, um, organ. 😉 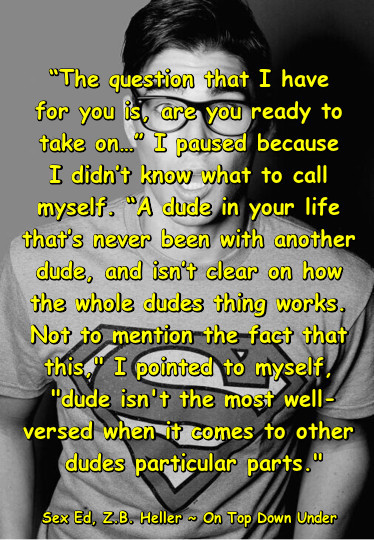 A couple of weeks later Jaxson goes to his family’s monthly dinner. Not all are blood related but they don’t have to be. Imagine Jax’s surprise when the hot nurse who Jax met during his most mortifying moment has been invited to the same dinner for reasons told in the story. All that’s bad enough, right? I mean, Jax is stuck sitting next to the guy who saw his junk when something was clamped down on it – the same guy he developed a major crush on and who he’s used for jack off material when his cock wasn’t in pain. You want to know what’s worse? His adopted uncle decides to announce to everyone at the table that Jax’s twenty-three-year-old self is still a virgin. Uncle Ryan doesn’t do it to hurt Jaxson. He just thought it was common knowledge already. I mean, the family normally shares everything (seriously, everything) anyway.

The family is nuts and I don’t mean that in a bad way. They were more than a little over the top, like ALWAYS, but they were hilarious. One of the funniest things in the book is Jaxson thinking back to when his mother had staged an intervention so that the young (13 or so) Jaxson could finally stop hiding his sexuality already. My favorite coming out scene will probably always be Bear’s in one of the Bear, Otter & the Kid books – even now I can think about that without giggling – but Jaxson’s ranks right up there.

“Jaxson Dane, it would be an honor to have you as a proud gay man. And just remember, a man’s asshole can be a mysterious place filled with secrets and lies. Choose wisely, dear son, before you stick your golden sword into the dark cavern.”

The whole story is really centered around Jaxson’s virginity after the embarrassing dinner. Everybody – from family, to adopted uncles, to coworkers, and best friends – has an opinion of how Jaxson should turn in his v-card. Of course, nobody’s idea is better than Tyler’s but he keeps his mouth (and pants) shut. He has responsibilities that he feels will suffer if he gets involved in a relationship. But he wants to. Oh, how he wants to.

There’s a hilarious cast of characters outside of Jaxson and Tyler. Ethan is in love with Sophie and their interactions are so funny you’ll be laughing out loud. Jax’s mom is nuts but funny as hell. Her husband grounds her. Then there are Jaxson’s coworkers, Jeff and Reed. Jax is a comic book nerd and private comic book artist. He works at Reed’s comic book store.

My mom gave her a pointed look.

“Don’t look at me like that; you’re the one who taught me that,” she said back.

Then there’s another important character in the book, Colton. At the risk of giving too much away I won’t go into much about Colton. I will, however, say that he was a sweet kid and was written as your typical teenage boy. As a parent of three now grown sons, it was refreshing to see a teenager written as they are in the real world.

Slowly, Jaxson and Tyler develop a friendship of sorts. They both want more but won’t push, for different reasons. Jax is horribly unsure of himself about everything. Tyler has to be a grown up and take care of the responsibilities I mentioned above. Tyler wants to be Jax’s first and only. When it doesn’t happen fast enough for their liking, his friends and family go out of their way (hilariously) to help him get laid. Unfortunately all opportunities are lost because either he has a clumsy moment – he has a lot of those – or something else prevents it from happening.

Eventually, the friendship between Tyler and Jaxson turns into a dating relationship. Long story short, it’s going very well until Tyler does something so awesome for Jax and Jax acts like a silly child about it. Anybody else would be cheering but not Jaxson. Instead of saying thank you, he has a serious immature and bonehead moment and pushes Tyler away. I saw his immaturity on the first page but this incident took the cake.

What I loved about the book –

What bugged me about the book –

Overall, this is a really cute story. There was a lot of telling and not showing when things started to come together. In the end it all worked out but I felt that it was important parts of the story that were mostly skimmed over. I selfishly wanted details. I’m eager to read Jeff’s story now and I also want to see Sophie and Ethan get together. But honestly, as funny as they were, I don’t think I could read a full-length novel with those two. I have ADHD. I think watching Sophie and Ethan go back and forth for 200-plus pages would give me fits. 🙂  I’ve checked out the author’s other books and saw where Jax’s parents have their book (s), as do Ryan and Brandon. Maybe I’ll go back in time a bit and check those out.

I really enjoyed this. Highly recommended.

This sounds like such a Cindi book – funny and nice guys that you want to hug included. I think you deserve and need a few funny books to brain bleach away the last one, I’m glad you found this one.

I love the mum, she may overshare but I respect crazy mums. I also like how accepting the family were.

And the Monty Python award for use of a wink-wink nudge-nudge banana GIF in a review goes to…… CINDI, lol.

Bahaha! You know what else is funny? My original opening line was, “After the last book I read I needed brain bleach so I was wanting something that was light and would make me laugh.” For you to say brain bleach is funny. I changed that line at the last minute. Sex Ed was hilarious and the humor starts on the very first page. It was a little over the top at times but very entertaining. I was thinking about you when I was reading about the mother. You’d love her. She’s nuts but in a good way. 🙂 It… Read more »