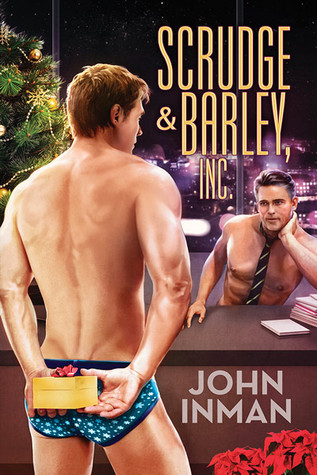 A classic tale takes off in sexy new directions! Poor Mr. Dickens must be twirling in his grave.

When E.B. Scrudge, putz extraordinaire and all-around numbnuts, is visited by his dead ex on Christmas Eve, he can’t imagine how his life could sink any lower. But the three ghostly spirits that come along after are even worse! Good lord, a dyke, a drag queen, and rounding out the trio, a big, hunky bear with nipple rings and a butt plug! What’s next?

What’s next is a good deal of soul-searching and some hard lessons learned with a dash of redemption thrown in for good measure.

And love too, believe it or not. Love that had been simmering all along at the heart of Scrudge’s miserable existence, although he was too selfish to see it—until a trio of holiday beasties pointed his sorry ass in the right direction.

E.B. Scrudge, Ebbie for short, is every employees’ nightmare of a boss. He’s greedy. He hates people. He treats his staff as the lowest of the low. He treats his clients even worse.  After inheriting a large insurance company from his former lover and boss, he followed in the old guy’s footsteps with the company. Trust me, that’s not a good thing. Ebbie, 44, lives a miserable life because he’s not willing to allow anyone in. Well, there is one guy, but he’s just for sexual gratification and nothing more. 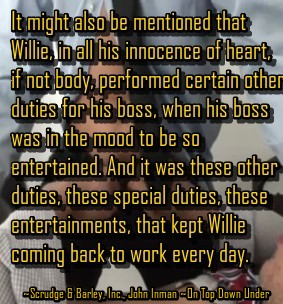 Said guy is Willie, Ebbie’s secretary. Willie, 24, is forced to do Ebbie’s bidding without question if he wants to keep his job. Willie needs the job, so if Ebbie says jump, he’s pretty much asking how high? I adored Willie from the moment he was introduced in the story. He’s such a great guy. He has an ill mother, who he loves more than anything. He stays at his miserable job in order to take care of her needs. There’s another reason he stays and that’s the evil boss himself, E.B. Scrudge. Poor Willie has gone and fallen in love with the much older man. He didn’t plan to, and his life would be so much easier had it not happened, but it did so Willie hasn’t looked for a position elsewhere.

There’s no reason to love Ebbie really. While Ebbie occasionally has sex with Willie, he’s cold immediately after, leaving Willie sad and more lonely than he was before he undressed.

Willie stared down at Ebbie, still naked before him. A splash of Willie’s come sparkled on the older man’s chest and chin. And while Willie’s legs were still weak with the release of passion, he stepped back, feeling suddenly naked and a bit ashamed. The cooling of Ebbie’s ardor toward him after sex was always a heartache for Willie. 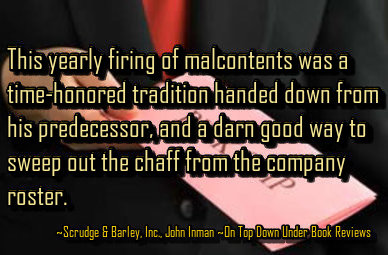 I mentioned Ebbie’s greed. He’s so greedy that he doesn’t care what happens as a result of insurance claims being denied. All he cares about is the bottom line, period. As for his employees, like the boss before him, Ebbie has a Christmas Eve tradition of firing people on that day every year. Poor Willie, being the big man’s secretary and all, is forced to pass out the pink slips.

On this particular Christmas Eve, Ebbie and Willie have sex before the younger man leaves to go home to his ailing mother. Once again, there’s no warmth from Ebbie. Get in, get done, get gone. Willie leaves heartbroken, but what did he expect? Ebbie has made it clear for a couple of years that it’s only about him receiving pleasure, nothing more.

I will throw this out there… you will hate Ebbie with every fiber of your being for the way he treats Willie. 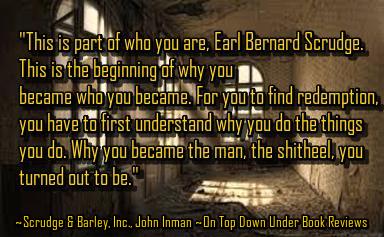 Later that evening – because you know it’s going to happen – Ebbie is visited by three ghosts. Like the classic, there’s the ghost of Christmas past, present, and future. From a lesbian named Bill, to a mean drag queen, to a hunky muscle guy who has entirely too much fun with a butt plug, he’s taken on a ride and forced to face some realities. The question is this… does it help? And will the reader like Ebbie even a little bit before it’s over? He’s an evil human being, after all.

You’ll have to read the book to find out. I ended this with a huge smile on my face and I was even rooting for the bad guy (so to speak) before it was over. When Ebbie is forced to visit his past is when the reader is privy to why he turned out the way he did. While it doesn’t excuse his behavior as an adult, it does give you an idea of why he grew up to be so bitter. 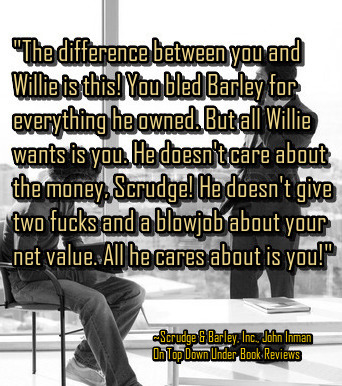 There are other characters who are also important in their own way. There’s a homeless girl, Willie’s mother, and other employees (most notably an elderly janitor) who add to the story. While they aren’t center like Willie and Ebbie, they are still important.

This is John Inman at his best. If you’re already familiar with his work, I have no doubt you’ll love Scrudge & Barley, Inc. I giggled a lot (I did mention the ghost with the butt plug…) and I got weepy a few times. In the end, I was thrilled to see mean E.B. Scrudge redeem himself. I can’t recommend this enough. I also have to point out that I LOVE books with characters who have substantial age differences. The twenty years between Willie and Ebbie were perfect for this particular reader. 😉

Okay then *smiles* what a naughty-sounding retelling of a Christmas Carol. On the TBR it goes 🙂

It is naughty. 😉 It’s also a very touching story. Fantastic retelling of the classic. I loved every word of it.

Great review Cindi and I love John Inman too, as Kazza said adding it to the TBR list

Thanks, Paul. I hope you enjoy it as much as I did.

I always love variations of this timeless Christmas tale. I’ve even got the Muppets Christmas Carol! It’s so awesome that John Inman has written his mm version of it. And what a fun and fab review. “: )”