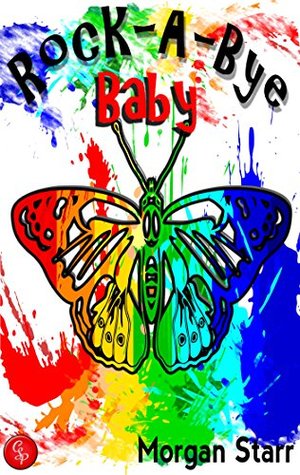 Valentine is six years out of a loveless ‘straight’ fog of a marriage, a marriage that produced two sons, who are now travelling, following University. Meeting up again with his first crush, Rod, a car mechanic/amateur singer who used to work for his father, forces Valentine to confront his fears about coming to terms with his gay life, his possible future as Rod’s partner, and most of all, as an ‘out’ gay dad.

This was a very good read and quite a nice surprise. Rock-A-Bye Baby is a rather British character driven story of second chances – for ex lovers, Val and Rod, for Val and his two sons, and Val’s life in general.

Val is forty eight and six years divorced. He’s had a change of pace and gone from insurance 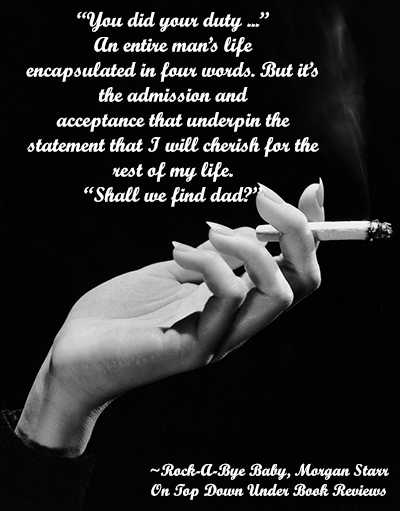 to running a successful mushroom growing business. He’s also gay but never said this to anyone. His ex wife doesn’t know, neither do his parents, although his mum just kind of knows as mums often do, and neither do his sons, Dan and Max, who are about to come home after travelling abroad. Val’s life has been rather ordered and sedate. Go to work, provide, be sensible, do the right thing, marry a woman, have children, and don’t think about it …until you have to.

The only one who certainly does know about Val’s sexual orientation is Rod Hadlow. That’s because they fooled around for a while when Val was eighteen and Rod twenty eight. Rod worked for Val’s father as a mechanic. He also played in a rock band part time, even got as far as Vegas. Before long, though, Val fell into marriage and the whole ‘expected’ lifestyle, which Val now discovers kind of rocked Rod’s world when Val did marry.

Rod and Val run into one another thirty years later when Val needs work done on his Capri, Val loves Capris, as does his dad, as does Rod. Particularly the mk 1. Rod was always Val’s fantasy that no one could live up to it. It seems the feelings have been the same for Rod. He had a long-term partner, David, but Rod never forgot Val. David died and there was no will, nothing legally Rod’s, and he’s a bit down on his luck.

“My partner; died about a year ago.”
“Shit; I’m so sorry. But, I always remembered you with that girl – what was her name?”
“Wendy … turns out, I liked boys better.”
“Me too; got divorced six years ago.”

After meeting and connecting again, it isn’t too long until Rod talks his way into Val’s life, sharing his house and organising to make his skillset earn some money; if Val is prepared to let him run a mechanic’s business on his land. It’s hard to say no to Rod, he’s so upbeat and sure of himself. He also makes Val feel things. Things Val hasn’t felt since he was eighteen and with the older Rod.

There is no angst in Rock-A-Bye Baby, there’s a bit of a kerfuffle because one of Val’s sons, Max, is not too keen on his father being gay, but that’s not played up. It’s more just looking at the different personalities of Val’s sons and that he’s getting to know them again after having been the writer of cheques while they were growing up.

Rod and Val are a good pair. I felt really happy they found each other again. I liked how Val 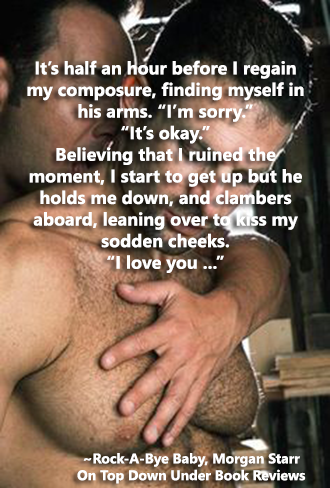 was shaken out of his staid life by Rod and he knew it was better having that happen,  even if he was being pushed out of his comfort zone. Rod made Val happy and allowed him to admit he was a gay man to those who mattered, himself included. I also loved that these two guys are older MCs, it’s not as frequent to have books with forty eight and fifty eight year old leads. The sex isn’t frequent but it’s interestingly written – it’s quite raw at times, and I liked it. Rod says how he feels and there is no malice or cunning in him, I loved how open he was. Val needed that. He’s a nice guy but at times I just wanted him to talk about things rather than having a stiff upper lip and making sure decorum was the order of the day. But it’s spot on for his character and for the setting. His growth was believable and well paced, particularly given the size of the novella.

My only niggle with this book is that it got too busy towards the end, which allowed it to veer off track a little. Val’s mum’s health, Val’s sons, Tom and the blonde, trips overseas, all subtracted somewhat from Val and Rod’s relationship hitting absolute central attention. One scenario allowed for something that was a little too convenient. Some of these things would have worked much better either stripped out or with a higher word count. It became too rushed near the end because it ran out of room. Up until the last, roughly, 20% this was a 5 star read. Half a star off for that. 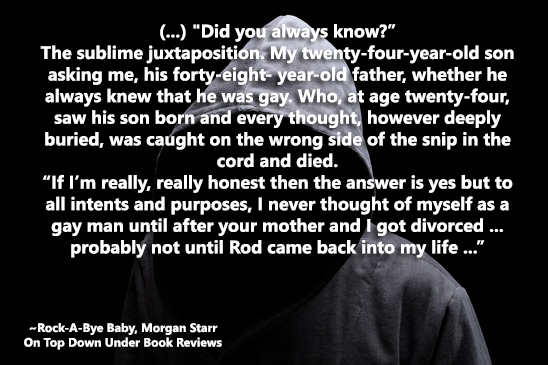 There are so many things about this book that I know I’d love. You know I love characters who are older. That’s so rare in gay romance these days. I love when ‘the one who got away’ comes back into someone’s life. Sometimes things live up to the fantasy and sometimes they don’t. Either way, it’s a story line I’ve always really enjoyed.

This looks like a great read. Don’t you love when you find books by accident and end up really enjoying them?

It really is an interesting and well written novella… and just a little different. I always love a well written character driven story, second chances, and at least one older MC, if not two. So it ticked a lot of my boxes as well 🙂