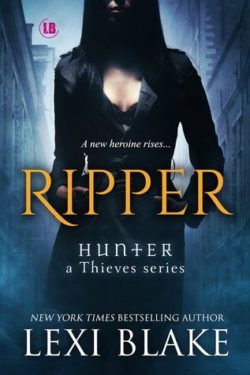 Kelsey Atwood is a private detective with a problem. She came from a family of hunters, growing up on the wrong side of the supernatural world. Tracking down bail jumpers and deadbeat dads may not make her a lot of friends, but it’s a lot safer than the life she turned her back on. She was hoping to escape from the nightmares of her past, but her latest case has brought them right back to her door.

A young woman has gone missing, and she didn’t go willingly. When Kelsey discovers that the girl is actually a shifter, she knows she should drop the case and walk away. But this shifter was a sweet kid, and she’s in serious trouble. More females are missing and the evidence points to a legendary killer. Bodies are piling up, and her case is becoming center stage for a conflict that could shatter the fragile peace between wolves and vampires.

As the hunt intensifies, she finds herself trapped between two men—Gray, a magnetic half-demon lawman, and the ancient vampire Marcus Vorenus. Both men call to her, but when a shocking secret about Kelsey’s family is revealed, it could ruin them all. To stop the killer, she will have to embrace the truth about who—and what—she truly is.

A Thieves Novel by Lexi Blake.

No plot review. Just my thoughts:

Gray. Wow! He was way too OTT – I’m going to marry you because I had a dream about you and I love you and have for ages. Okay, I’d be leaving very quickly if that came out of a guy’s mouth after not really knowing more than he was my brother’s good friend. He was so damn possessive. Yes, I know he’s a Halfling demon with certain attributes, but…okay. Also, hassling and hustling over the wedding. Pfft. Telling Kelsey that her job was done now. No more working on this investigation. We’re not talking about it, I’m telling you to go to our home and wait for me. Gray has spoken! I’m totally paraphrasing but that’s how it felt, in a nutshell. Add an implied old fashioned ending of ‘little lady’ to everything he says. He doesn’t say that, I just felt it in my bones.

Is Gray completely heinous? No. He’s not. There are things about him with so much potential but he has to tone it down. I’m guessing he’ll redeem himself in the next book. His behaviour is a combination of being part demon and because he’s a victim of a shitty demon father and their painful, convoluted demon contracts, and just plain circumstance. Still, he should have come clean on a major omission. If you’re going to be marrying someone in three days it’s nice to have a possible transfer to daddy’s plane on the table.

I had a book discussion with a Goodreads friend about how I felt there was s shift in personality of Daniel and Devinshea, two main characters in books 1-5. They felt different to me. It bothered me because I loved these guys and I found myself at arms length with them. However, this is Kelsey’s book, she rightly needs to take centre stage and she did, but Daniel and Devinshea are an important part of this series and this book. The vampire near the beginning, Daniel, who answered Kelsey’s question as to how he has children – because I opened myself up to possibilities – was not the guy who did some shitty things to her and Marcus later on. The Devinshea who talked about his wife and also his partner, Daniel, and had his children with him while talking to Kelsey in the beginning, also did not fit the person he became later in this book, or fit some of the things that were dropped throughout the investigation Kelsey undertook. Devinshea’s childish spat with Marcus made no sense to me at this point and Dev seemed like a dick. I’m not saying they didn’t have their, well, man-baby moments in Thieves 1-5, because they did, but they were just so infuriating this time around. I do not like to see that with characters I have loved, I want some consideration of the attachment readers form. But as I say, this is simply my interpretation and my friend felt differently.

I do know Ms Blake has a habit of writing people a certain way and changing them up for valuable emotion’s sake. As part of her overall plotting. I’m not saying that is bad by any means because the emotion is still there… even if I’m cranky Kazza. Let’s see what happens in Addict and what character and behaviour shows for all, and why.

I had my ups and downs with this book. I liked the paranormal aspects far better than the romance. The mystery was good. The time in the arena was good. Kelsey discovering what was going on with the beast within was pretty good too. I wanted some more backstory on Gray and Kelsey but I have enough, I guess, for now. The book is well named in light of the fact that Jack the Ripper is a vampire and he lives in the Dallas area nowadays and for the style of murder and the mystery that ties into his old infamous spree, But what happened there? Kelsey just knew he was going to be after her, they had a …moment, but nothing happened. Maybe that will be carried onto the next book.

I don’t know how I feel about the romance side of things, other than it’s the weakest link. I’m also unsure how I feel about Marcus in the middle of this at the moment. He might be the loser in it all because Kelsey makes it clear that Gray is her love.

I studied the man beside me and wondered what would happen between us. I wanted to open myself to him, but I hesitated and I knew why. The drugs were out of my system. I was no longer under the influence of any spell.
I still loved Grayson Sloane.

I’d hate to see Marcus hurt because he’s always been a gentleman. Maybe there will be another ménage? Maybe other predictions may come to light?

Not a bad book but I felt like the MCs I loved from books 1-5 lost their heart and soul. I have to adjust to this new series within a series. There is a lot of potential but this book didn’t make me feel enough for anyone in particular, although I do like Kelsey and that she is the new (somewhat flawed) heroine. I am happy to be moving onto Addict to see where that takes me. 3 Stars!
*Footnote: Addict is a very, very good book so perhaps check out the review if you are wavering.