Reasons to Love a Nerd Like Me, Becky Jerams 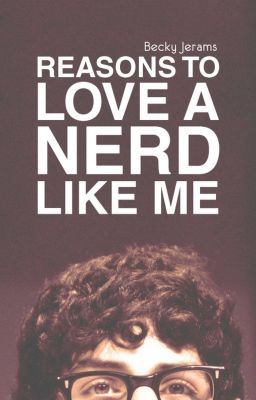 Scotty Williams is the nerdiest 17-year-old at Havensdale College – and proud of it. However being a nerd can have its downsides, particularly when you’re constantly being targeted by the school bully Taylor Raven and his cronies. As Scotty tries to navigate his final college years with the aid of his best friend Olive, he also finds himself on the radar of the mysterious and intimidating Vincent Hunter, toughest guy in the Sixth Form. Is Vincent really as bad as he seems? Will Scotty’s darkest secret ever be revealed? Can he ever just finish his last few college years in peace? But most importantly… will any guy ever find the reasons to love a nerd like him?

The Wattpad hit “Reasons To Love A Nerd Like Me” by Becky Jerams comes to Kindle for the first time in a new and improved edition. With over 2.4 million reads and counting, the first draft has resonated with readers across the world and been compared to authors such as John Green and David Levithan. Recommended for fans of teen drama and unconventional romance.

Reasons To Love A Nerd Like Me is a really nice YA story that I enjoyed reading.

Our MC, Scotty, is openly gay and the target of three school bullies. He has a history with one of the bullies, the main bully, Taylor. I can’t say I was expecting the history, to be honest. Normally I can tell something like that is coming, but apart from a little niggle right before, there was nothing. It was nice to be surprised.

I liked Scotty a lot. He wasn’t the perfect MC you sometimes read about. He made mistakes and he did things I didn’t like. But he never intentionally tried to hurt the people he was closest to. Actually, he really believed he was protecting them and that made him so much more likable. I was rooting for him throughout the book.

I also liked his best friend Olive “Ollie”. A couple of times that wavered because I thought she was being very hard on Scotty. But I warmed up to her again pretty soon after that. And their friendship, when going well, was strong.

The love interest, Vincent, I adored him from the start. He had been through a lot and wasn’t always the nicest to everyone. But the way he was with Scotty melted my heart. I would have liked a chapter or a few scenes from his POV because there were a couple of times, during the massive fallout, that I think his POV would have been useful. I could understand how he was feeling, but I still got frustrated with him and I don’t think it would have been as bad had we gotten his POV.

Taylor and Alexis are two characters I’m still not really sure if I liked or disliked. I didn’t particularly love them, even in the end, but I didn’t hate either of them in the end. Out of the two, Taylor, was the hardest for me. But while I never completely warmed to him, I did sympathize with him a little close to the end. On the other hand, I really liked Scotty’s mum. She was supportive and loving, which was needed in some of the chaos of the story.

The negative for me was the drama that ensued after Scotty’s past relationship with Taylor came out. I didn’t hate it completely. But it bugged me more than once. It did fit with the book, however, and it made the ending even more enjoyable for me. I think had the fallout not continued for as long as it did, I would have loved this book.

I’m so glad I read Reasons To Love A Nerd Like Me! This is Becky Jerams first book and I’m excited to see what she releases next.

Thanks, Kazza! 😀 Yes! I’m always glad when I can add some good YA authors to my list. 🙂

This sounds like a nice YA book. Thanks for your review, Trisha.

Thanks for the review and making me aware of this book. I’m intrigued, it definitely sounds like a good read and i put it on my TBR list.