Quick to the Hunt, Cameron Dane 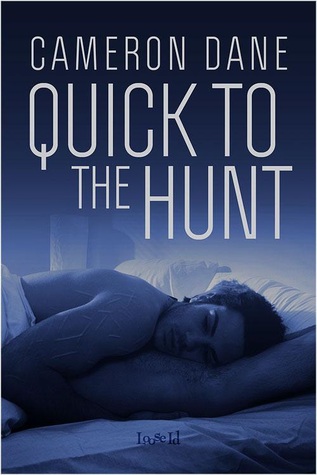 Read this ages ago but had to put this on here as Cameron Dane’s books are a great love of mine. This one’s so good.

This is the best book of the Quentin Montana/Hawkins Ranch series and that’s saying something as, for me, they have all been good books. Quick to the Hunt deserves every bit of the 5 star rating I’ve given it. It’s terrific. I always knew there was a dark writer inside Cameron Dane and this book is proof-positive of that.

First of all, in order to get the most out of this book, you need to like/be comfortable reading gay/M/M dark psychological content and some fierce/angry sex scenes. Over 80% of this book is not spent in a comfortable or happy place.

Hunter Tennison is Sarah’s brother (she’s an MC in Becoming Three), he has come back home after several tours of Iraq/Afghanistan. He’s been stateside for approximately a year but has hidden this fact from his sister. Hunter is a very disturbed man who is self harming to deal with the pain of loss and enduring what humans aren’t meant to – the atrocities that go hand in hand with being in a war – killing, friends being killed, bodies permanently maimed. Hunter is a good man who has been through the emotional wringer. He is now trying to adjust to being in his home town, working, endeavouring to fit back into everyday, civilian life – but he is not coping. You can’t help but feel for him and his plight. A plight many face as they are damaged by war and left to their own devices when they are discharged or leave the service.

Alex Quick was also made familiar as a secondary character in Becoming Three. He is the head of a multi-million dollar empire of real estate and other business ventures, and he’s in Quentin to develop land into housing. Alex had a rough childhood, however a steady constant in his life has been Mack. Mack has always been like a biological father to Alex. He’s ill during Alex’s time in Quentin but he’s a tough guy and slogs through his illness in his usual ‘I’ll be fine’ manner. Alex goes back and forth between Mack and Quentin but eventually Mack dies, leaving Alex to deal with losing an important part of his life. It’s compounded by the fact that the person he is falling fall is incapable of being there for him, if anything he unwittingly adds to the grief in many ways. I just want to say that I truly love Alex Quick. He’s a wonderful character, he’s not your stereotypical alpha male, but he is all man. Someone who will stand by a partner in their darkest hour and love them unconditionally encapsulates a real man to me.

Alex and Hunter develop an attraction towards one another despite their best efforts not to act on it; Hunter, because he is not of sound mind, and Alex because he’s not sure he wants the desolate man that he sees in Hunter. Basically, while they do get together sexually, it is not pretty. Hunter cannot handle love or being loved, it triggers all sorts of self-loathing and panicked reactions, whether that be about Alex and himself or his sister and Jace. Sarah and her partners, especially Jace – who has been Hunters’ best friend – are worried about this ‘new’ Hunter. Alex develops feelings of love for Hunter which are reciprocated but with angry, violent sexual and physical encounters. Hunter will not go and see therapists that Sarah and Jace have organised for him, and now believes self harm is the best way to keep him from feeling, but all he is doing is pushing himself further into the dark mire of depression and PTSD.

Even though it’s violent in nature – one of the hottest sex scenes I’ve ever read is in this book – in the farmhouse being renovated. Bloody hell! is all I can muster. Cameron Dane surpasses herself in the writing of erotic content in this book. It is desperate, intense, scorching. I love Cameron Dane as a writer, she creates and develops her characters with such love and layers, and this shines bright in Quick to the Hunt. Lord, she must have had some bleak times writing this but she shirks nothing and does the topic and characters justice. I love the fact that the book takes place over a year, that the chapters through to the epilogue are headed up by a month. It gives readers a timeline of how Hunter’s mental health issues take time to be worked on, they just don’t just suddenly, magically go away. There is no magic penis in this book.